McCoy: County will increase services in 2020 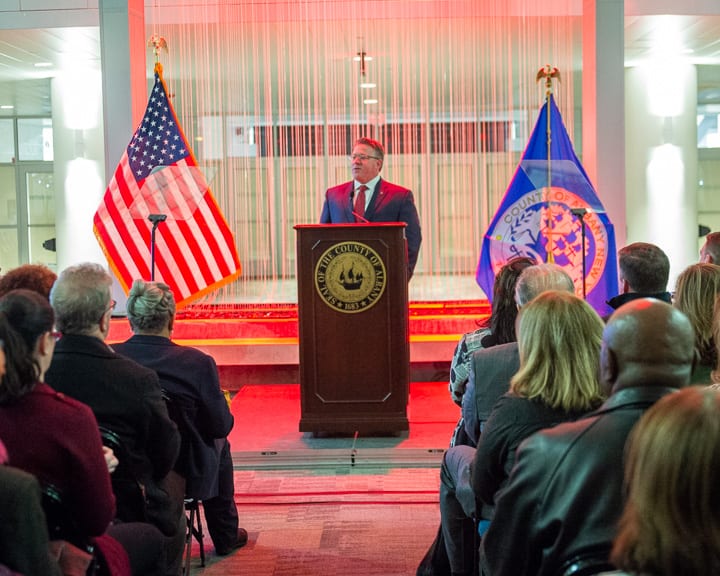 ALBANY — County Executive Dan McCoy, in his ninth State of the County address on Thursday, Feb. 13, pledged to increase services to the mentally ill, those addicted to opioids and seniors.

In 2020, he said, the county Department of Mental Health will establish a Mental Health Court. It would be similar to drug court, which allows those who commit a crime while under the influence or as a direct result of an addiction stay out of jail provided they get treatment for the underlying addition.

“The department is also committed to offering individuals living with mental illness every opportunity to minimize or avoid unnecessary involvement with the criminal justice system and by reducing unnecessary incarceration whenever possible,” McCoy said during his speech at the Times Union Center atrium. “And after years of effort, the department’s goal of establishing a mental health court for Albany County – an initiative I proposed nearly 5 years ago, will become a reality this year.”

While opioid addiction does not discriminate, McCoy said the county will expand the GROW – Getting Recovery Options Working — program to include a peer-support program designed specifically for veterans.

He cited studies that found 17 veterans commit suicide every day with the majority of those either abusing or being addicted to opioids. Veterans who have successfully dealt with their abuse and/or addiction issues will be trained to counsel and assist veterans and their families still in the throes.

Along the same lines, he touted the county’s role in a massive lawsuit against the pharmaceutical industry that is still working its way through the courts.

“That litigation, is now the largest and the most complex lawsuit in American legal history,” he said. “In fact, it is the first time ever that a class action has been certified for negotiating purposes, and Albany County has been given a lead role as a class representative. I believe that almost nothing we do is more critical than our efforts to stop this crisis and to get help to those individuals and families suffering from the ravages of addiction. And almost nothing that we do will be more consequential than ensuring that no one, particularly our children will be further endangered by the reckless conduct of the pharmaceutical industry.”

He also announced the creation of a taskforce to combat isolationism among the senior population.

“Medical research has shown that social isolation is more lethal than smoking 15 cigarettes a day or even obesity. In fact, research has shown that social isolation leads to heart disease, dementia, and higher death rates,” he said. “We’ve already seen the success of our Department for Aging’s congregate senior dining initiatives to combat loneliness and isolation with older residents. They can serve as a model of what we can and will do in Albany County to lead on this important mental health issue.”

One concern he did express is Gov. Andrew Cuomo’s plan restructure Medicaid. The state has absorbed increases in Medicaid to help localities stay within the tax cap, and while the governor has not explicitly said he plans to shift more Medicaid costs to localities in order to help close the some $6.1 billion deficit, it is widely expected. How much is not certain, but the counties have long complained about picking up a portion of the tab for services the state dictates they must provide.

McCoy, who ran unopposed for a third four-year term in November, 2019 said he was more excited about this speech than his first because of the county’s fiscal condition when he took office.

“Our nation and our state were entangled in a financial downturn that affected our county in ways large and small,” he said. “Almost all of the County’s departmental budgets had been slashed and many essential programs had been cut. Our reserves were being depleted, and we were resorting to cash flow borrowings.”

Since, he said, finances are stabilized, reserves are at historic highs, programs have expanded and tax increases remained under the state mandated cap seven years in a row.

On the private sector side, McCoy announced the completion of a year-long report undertaken by the Albany County Business Advisory Board, a group of private business leaders, in conjunction with Camoin Associates and the Burgman Group to develop a plan to foster economic development.

The report led to four basic goals: a better use of resources when the county competes with other counties for businesses, to develop a comprehensive county-wide economic development plan, to focus on better training for workers and to better market the county to businesses looking to make a profit and workers who may want to relocate.

“We have what it takes for success, a highly trained and educated workforce; world class institutions of higher education; a vibrant cultural scene; great history and unmatched natural beauty; as well as a thriving port and one of busiest and best run airports in the country,” he said. “We now have to agree on a way to leverage these assets for the benefit of the county’s residents which I am confident we can do.”

Some previous milestones and accomplishments touted by McCoy include:

•  An increase in funding for the legal defense of the indigent and immigrants.

• The landbank has put dozens of decrepit, vacant properties back on the tax rolls.

• The Times Union Center had its second most profitable year ever in 2019.

“We applaud Albany County Executive Daniel McCoy on his bold agenda for 2020. We are very excited to work closely with him on several critical issues he addressed tonight, including keeping our seniors active in our community, veteran addition and recovery programs and economic development. Yet we know there are other issues that continue to impact our residents. We share McCoy’s concerns regarding the potential impact Medicaid costs could have on our residents and are closely reviewing the governor’s proposal. I look forward to continuing this partnership to turn the executive’s vision for the County into a reality.”

“As far as economic development is concerned, the most important things you can do is ease the tax burden and create regulations that are more sensible but I did not hear anything about cutting taxes in his speech and sales tax has really been brisk. Our property taxes raise $93 million a year and sales tax raises $285 million. This is a business activity that pays for the social programs that meets so many needs so we should all be interested in helping the business activity grow and that is often not the case.”