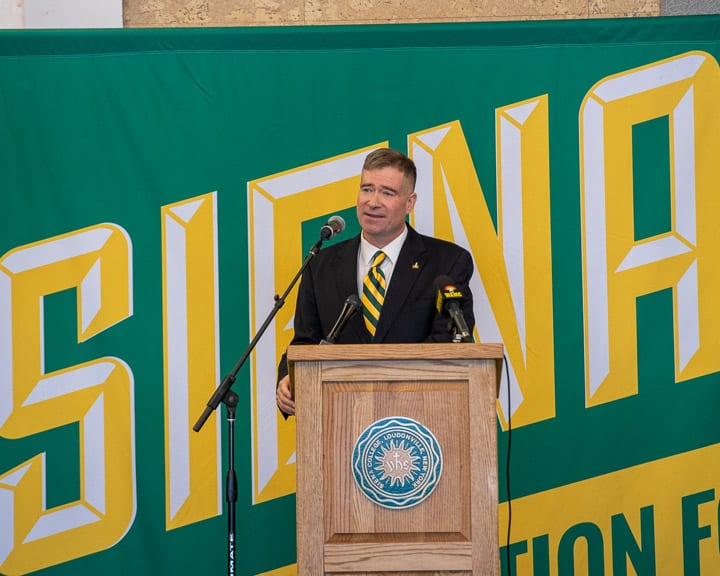 COLONIE — For the first time in its storied history, Siena College will not have a friar at the helm.

The college announced Chris Gibson, a decorated military veteran and former member of the House of Representatives, as its 12th president in front of a large crowd of administrators, staff and students on Friday, Feb. 15.

“I’ve had three professional lives starting today. First as a soldier right out of Siena College and it was very important to me. I believed in that exceptional way of life and was willing to put it all on the line for that. Then I served as a representative in the U.S. House and that was also a great privilege,” said the 1986 graduate. “But of all the callings I’ve had this one is the strongest because I believe at this time, at this time in our country’s history, we need Siena College graduates more than ever.”

Gibson will begin a five-year term on July 1 and will be formally inaugurated at a ceremony this fall. The college’s 11th president, Brother Ed Coughlin died in July 2019 after complications following a non-emergency heart procedure. He was 71. A month earlier, he announced he was stepping down from the post. The 10th president, Rev. Kevin Mullen, resigned in 2014 to take a position leading the Franciscan Friars of the Holy Name Providence.

John Murray, chair of the Board of Trustees, said Gibson was unanimously chosen after “100s of hours of discussion” between all of the college’s stakeholders.

“The entire campus community looks forward to working with him to build on the college’s current successes and move strategically into the future,” he said. “His dedication to liberal arts education and Siena’s Franciscan values, coupled with his leadership experience as an elected member of Congress, military officer, and respected scholar will be tremendous assets as a higher education executive.”

Gibson was the representative for District 19 in the House of Representatives from 2011 through 2017. He is a Republican, and while he was considered a moderate he is conservative in regards to social issues. According to the college, he finished “first among all House representatives of both political parties in the inaugural report of the Lugar Policy Center Bipartisan Index in 2014, and served as one of the co-chairs of the bi-partisan caucus ‘No Labels.’”

He is a 29-year veteran who rose to the rank of colonel in the U.S. Army. He commanded the 82nd Airborne Division’s 2nd Brigade, leading them to Haiti on a humanitarian relief operation after the 2010 earthquake. He served four combat tours in Iraq and was part of the NATO peacekeeping mission in Kosovo.

He is currently the Stanley Kaplan Distinguished Visiting Professor of American Foreign Policy at Williams College. He is a member of the Hoover Institution’s Working Group on the Role of Military History in Contemporary Conflict, a visiting fellow with the Catholic University’s Center for the Study of Statesmanship, and a member of the Editorial Advisory Committee of the Bipartisan Review, a project with Cornell University’s Institute of Politics.

He authored two books, including his most recent work “Rally Point: Five Tasks to Unite the Country and Revitalize the American Dream.”

In addition to his history degree from Siena, Gibson holds an M.A., M.P.A. and Ph.D. in government, all from Cornell University. He resides in Kinderhook, N.Y. with his wife, Mary Jo, and their three children.

“Our committee received more than 75 applications from outstanding scholars and higher education executives across the country,” said Thomas J. Baldwin, Jr. ’81, vice chairman of Siena’s Board of Trustees and chairman of the Presidential Search Committee. “We’re delighted to wish Dr. Gibson all the best as he prepares to assume the office of president.”

Gibson said his time at Siena and the Franciscan tradition played an instrumental role in shaping his values and ideals and was a factor in turning him into the man he is today.

“I have seen the human condition in some of the most trying circumstances and I have noticed at those moments that servant leaders step forward. You find a way and you are able to find the language and the actions to unite all people. This is what we do at Siena College and this is why this calling speaks to me.”

PICK OF THE WEEK: Driftwood, Zan and the Winter Folk play The Hollow on Friday