Candidates square off in Colonie debate 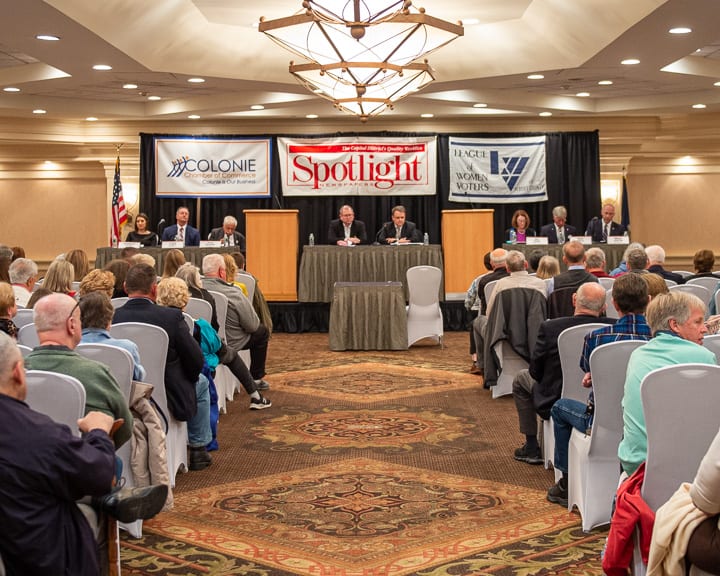 COLONIE — All six Town Board candidates and both supervisor candidates fielded questions during a debate Tuesday, Oct. 29 sponsored by the Colonie Chamber of Commerce, the Albany County League of Women Voters and Spotlight News.

Incumbent Supervisor Paula Mahan, a Democrat, is looking for her seventh, two-year term in office while her opponent, George Scaringe, is making his first run at public office after a long career working in Republican Party politics behind the scenes.

The exchange got testy at one point during the debate when the issue of pensions was brought up. Scaringe criticize Mahan for taking her full pension — earned after working 29 years in the North Colonie School District — and the full supervisors salary.

He vowed, if elected, to waive the pension he earned at the Hudson Black River Regulating District.

Scaringe said while it was not illegal to collect a pension and a salary once a person turns 65, he said it was unethical. Mahan countered with a report that said Scaringe worked basically a no-show job while collecting $62,000 a year and from that he earned his pension. She accused him of stealing taxpayer money.

The two were also asked to say something nice about each other. Scaringe said he liked her more when she was a Republican. Mahan basically said she gave him credit for standing up to run when nobody else would.

The debate was moderated by Spotlight News publisher John McIntyre and the questions were asked by Managing Editor Michael Hallisey.

LETTER to the EDITOR: It’s not easy to reform state pension system