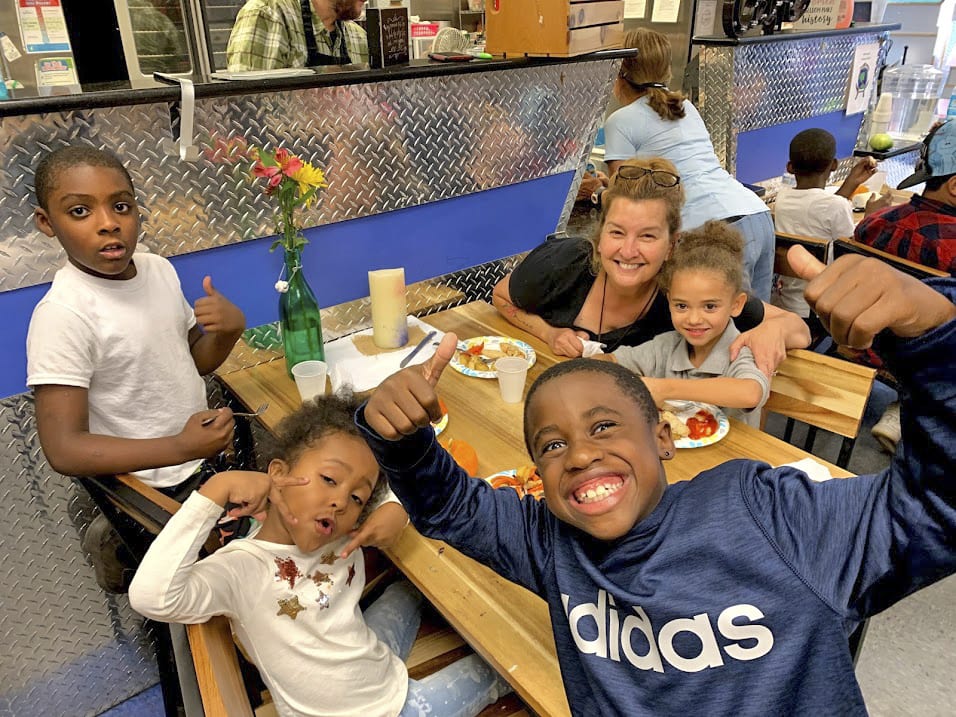 ALBANY — The South End Children’s Cafe appears unassuming at the intersection of Warren and Phillip Streets in Albany but Tracie Killar, its director and founder, wants to continue expanding its humanitarian-like mission after receiving a $10,000 grant from the Women United Perfect Pitch back on Sept. 12.

Located on 25 Warren St. in the South End of Albany, its name is quite a misnomer. While it does have a functional kitchen, pantry and a cafe-like environment where free, healthy dinners are served to local elementary school children in need on weekdays, it also offers space for kids to receive personalized homework help, hands-on arts activities, games and toy sets for entertainment, and attention from a group of mostly volunteers and a few paid workers. Around half of the volunteers come from Bethlehem and Guilderland.

The children, however, mostly are homeless or come from families who lack easy access to transportation, money or making their own food.

“Food is food and we all need something in our bellies but we wanted to feed the kids healthy food because I think we can easily feed them healthy food as much as unhealthy food,” said Killar who first opened it in November 2015. “The parents sometimes are invited to eat here although most of the time, they don’t so our chef puts out to-go containers for them.” Examples of food and drinks kids have access to here include 1 percent milk and water, fruits, salads, chicken and more, she said, which shows the variety of options kids can expect through a weekly basis.

The food is mainly donated from generous individuals and organizations, food drives, or result from checks made out to the cafe.

According to Killar, the cafe has served around 33,000 free healthy meals since opening and is mostly run by 20 volunteers to cater to about 32 South End children on weekdays. While free lunch and dinner are served in the summer, only free dinner is available in the other seasons.

Parents typically drop their children here after school at around 3 p.m. where they typically do their homework first, then they have time to play games or take a neighborhood walk with volunteers, and their free dinners are later served at 5 p.m. To further facilitate social interaction and engagement, kids are not generally allowed to use technology like smartphones when they are at the cafe and their activities are hands-on.

Earlier this year, Killar had pitched to the Women United Perfect Pitch, a Shark Tank-like event where six local nonprofit organizations explained to a panel why they would like a $10,000 grant from the United Way of the Greater Capital Region. This event seeks to help causes related to women and children.

“My pitch was to ask for funding so we can do a second dinner service so that we could feed more kids because our space is such a small area and we have a capacity in the cafe of 64 people,” she said. “We can’t have more people inside for now but there’s still so many kids to feed. With the second dinner service, a group of kids would come in for dinner and then after they leave, a second group of kids can come in to eat.” This time, she added the cafe wants to provide meals for local middle and high school students in need, as well as additional homework help and non-technology activities for them.

She further said that limited space is the cafe’s main issue now although “we make do … But we always have a waiting list which breaks my heart.” Another issue is money and the cafe both holds their own fundraisers or benefit from local ones, including from Albany and Bethlehem. However, with the grant, she also hopes to bring in more food and possibly hire a few more staff members.

When asked how she felt about winning the grant, Killar said, “Shocked. I was shocked but I am so grateful.” The $10,000 check, however, has yet to be delivered but Killar said she expects it sometime in October.

A major component of the South End Children’s cafe is the workers and volunteers who come in for different shifts on weekdays.

Beth McCrea, a Delmar resident and retired teacher who volunteers there as a homework helper, said she heard about this opportunity from a friend and she believed that many kids seem to learn better when having one-on-one help with their homework.

Sue Bango, a Bethlehem resident and fellow retired teacher who also offers personalized homework help, said she still wanted to continue working with children. Adding that her first day was Wednesday, Sept. 18, she said it “has been great so far and I thought this place was pretty awesome,” adding that she first heard of it as she knew Killar from church.

Sandra Olson, the cafe’s academic director and a volunteer since it first opened, supervises the so-called “Manners Cafe” within it where she picks four children to have dinner with her in a quiet corner in a separate room, as opposed to the main cafe where most of the children eat. As its name suggests, the Manners Cafe is used to teach them how to maintain good manners and properly use silverware.

“I think a lot of kids here don’t get the opportunity to sit around a dinner table with family and the Manners Cafe is a time for them to talk to each other and learn simple things like even saying ‘thank you’ and ‘please,’” Olson said. “The kids also having somebody to help them with their homework is great because that’s not necessarily the case at home for whatever reason.”

Kate Lawler, a Guilderland resident who has been working as a kitchen cook there for almost three years now, said, “Some of these kids never have their own beds or know when their next meal is going to be, and that’s their lifestyle. They need stability and people that they know who care, love and do nice things for them.”

Lawler added she herself grew up in a family who did not have a lot of money but they always ate dinner together. Believing that a family eating dinner together helps to pass on morals and traditions to the next generation, she said the cafe welcomes kids who do not know when their next meals are or where they will live, as many are homeless or in financially-strained families.

“I want to keep working here as long as I can and I love kids,” she concluded. “The kids here have so much love to give.”

Killar said she wants to take advantage of the $10,000 grant to continue addressing food insecurity, food equality and food justice in the South End, where many poverty-related issues exist.

“People don’t have access to healthy food because it’s expensive and a lot of times, they don’t have transportation,” she added. “Here in the South End, we’re considered as a food desert where there’s not a lot of affordable and accessible food, and our closest grocery store is about a mile away. Some families have to walk up the hill with their strollers and their kids wearing their backpacks to get to that grocery store. Then, you need to come all the way home with your grocery bags and kids, and sometimes you’re doing all this as a single parent.”

Despite this, Killar exuded optimism as the grant will make it a bit easier for the Children’s Cafe to hopefully serve more children in need and attract more volunteers or workers. “We have created a community for the kids where they feel loved and cared about and I think they feel that way when they come through our doors,” she concluded.