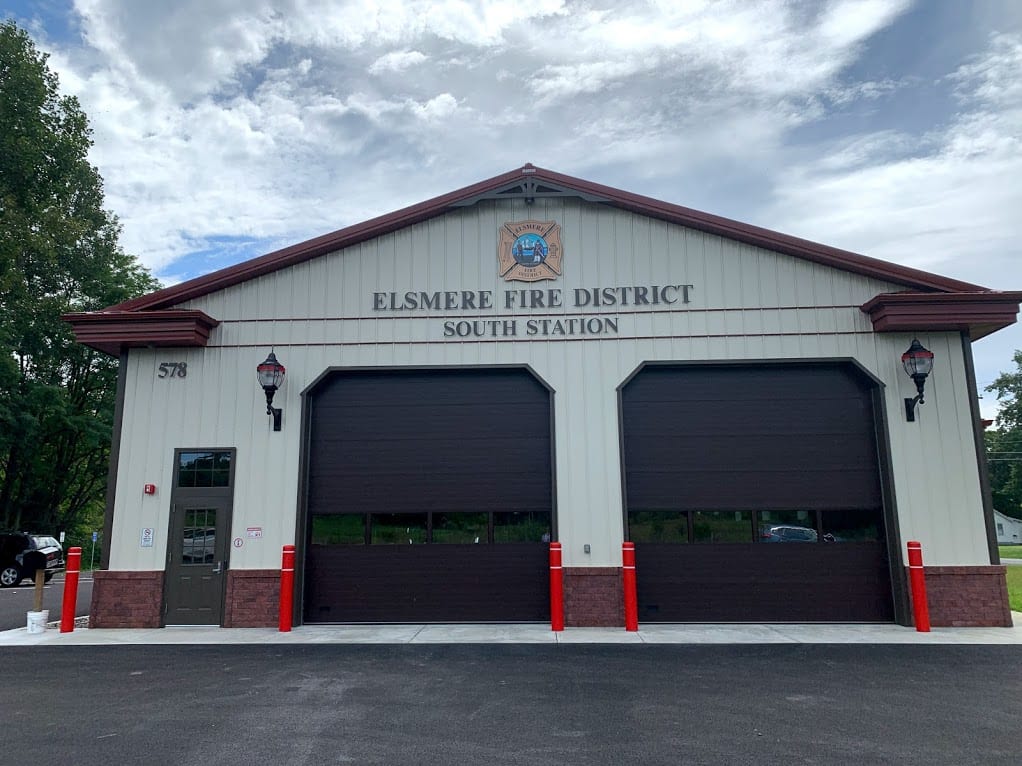 BETHLEHEM —  The Elsmere Fire District’s new substation will have its open house and a ribbon-cutting ceremony on Sunday, Sept. 15.

Happening at 578 Feura Bush Road in Glenmont, the open house will be from 1 to 3 p.m. while the ribbon-cutting will occur at 2 p.m. Locals will have the opportunity to tour the new building, enjoy food and meet the 80-something volunteer firefighters.

This new 4,608 square-foot substation, or the South Station, technically first opened on Wednesday, Aug. 7 for service. With around 20 firefighters expected to work out of this station, it aims to improve response times to emergencies in the southern part of the Elsmere Fire District which previously did not have a nearby firehouse; the first and main station is located up north on 15 West Poplar Drive in Delmar.

“We want to thank the people for their support and make them aware we’re open,” said Jack Brennan, the former chairman of the district’s Board of Fire Commissioners and a firefighter for 45 years. “This has been a thought process since the early 1980s and in 1982, our predecessors purchased this land where the substation is.” The substation, Brennan added, is located where development is expected to grow in the Glenmont area, making its functionality feel proactive.

Regarding the latter, it has long been nicknamed “The Bus.” Reagan — who said it transported him, around three more Elsmere firefighters, and the Urban Search and Rescue Team to Ground Zero immediately after the attacks — said, “The bus was actually brand new that day [on 9/11] and our main firehouse was under construction then. It was crazy and we were racing the bus around and it was full of people. We went down to Ground Zero, right at the corner of West and Vesey

streets. Things were so different back then too because there were no cellphones that could take pictures, or emails or the internet. People only had pagers and beepers.”

The Bus contains a sign near its right door with a black silhouette of the Twin Towers against the backdrop of the U.S. flag with the words, “Proud to Have Served at Ground Zero. September 11, 2001.”

The substation project originally went under review by the town’s Zoning and Planning boards since Dec. 6, 2017 and was approved on Dec. 12 by voters in the fire district, with 272 in support and 180 in opposition. The project cost $1.4 million and construction began in late September 2018 and ended this past June; Brennan said the district began moving equipment, vehicles and breakroom furniture in August.

When asked if the project has faced any issues, Richard Webster, Brennan’s successor, said, “The building of the station has actually been pretty seamless” while Brennan said time was needed to spend on having the project be reviewed by the town’s Zoning and Planning boards. However, Webster added, “Membership is always a challenge everywhere though. The volunteer fire service is being challenged by just not enough people volunteering.”

“A good part of this open house is that he’s working on showing all the benefits to being a member here,” Reagan chimed in, gesturing to Brennan. “And the programs we have and scholarships and live-in firefighting programs. Anything we can do to encourage membership.”

As the three men stood inside the new substation that appeared ready to welcome locals in to get to know it more, Brennan said, “A lot of people said this could never happen and fought against it for one reason or another. But a lot of those people have reconsidered and we’ve had a number of people come by and said they never thought it could look like this and they worried it was going to be a disaster.”

When asked if there are plans for a potential third station, the trio answered in the negative, although they pointed out that the new substation is still developing its Decon Area room where features including a washroom, sinks and a dryer are expected to come to fruition in the next few months. “Beyond that, the station is complete and ready to go,” Webster said.