Coach A honored at the Colonie High Wall of Heroes 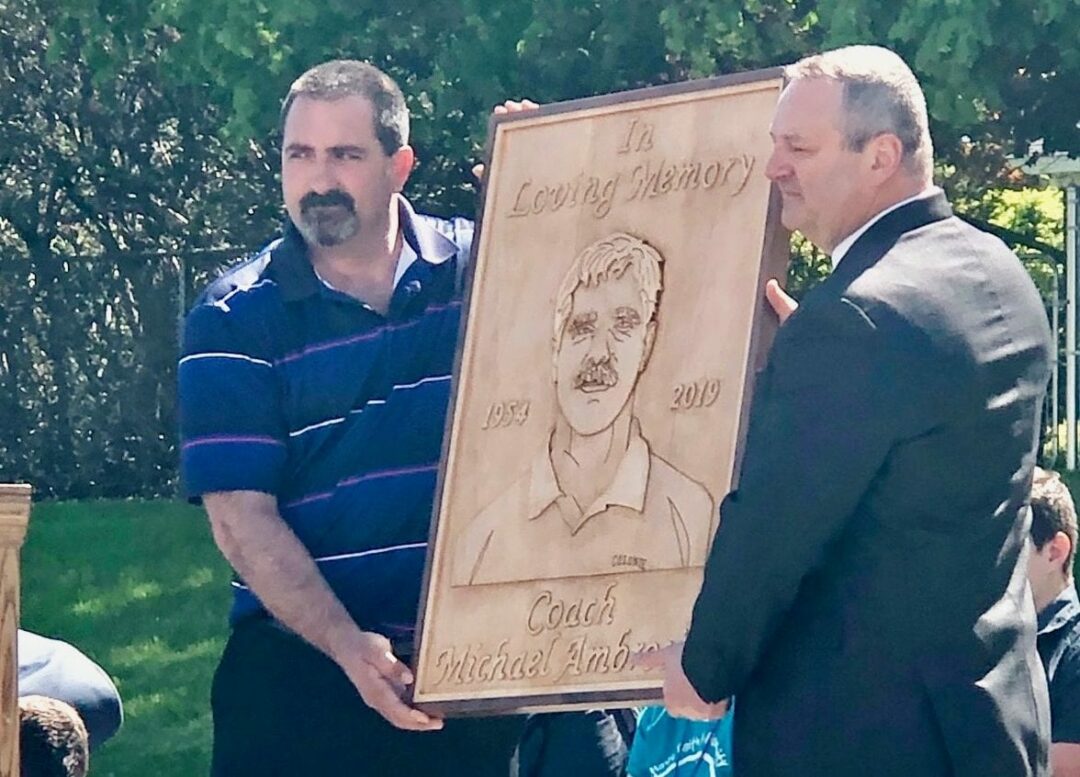 COLONIE — The late coach Michael Ambrosio was named the first Kind Human of the Year, on Saturday, May 18, during the annual Raiderfest 2019 Hill of Heroes ceremony.

Ambrosio, who died suddenly in January, was a beloved teacher, coach and a cornerstone of Colonie athletics for three decades, dedicating his life to the students and athletes of Colonie.

“You can’t talk about Colonie heroes without talking about Coach A,” said James Vardaro, assistant principal of Sand Creek Middle School and Saturday’s master of ceremonies. “For 30 years he was a great and kind human being to all of us and he left behind a standard of excellence we will never duplicate.”

Ambrosio was a South Colonie Physical Education teacher from 1985 until his retirement in 2017. He coached high school wrestling, track and lacrosse, and took over as varsity football coach in 1997, where he remained until 2011. During his tenure as head coach he guided the football team to three class AA Super Bowl appearances.

On the day they honored him as a community hero, two of his former football players were on hand to pay tribute to Ambrosio and speak about how much he meant to their lives.

Parker Fields, who graduated in 2018 and now attends the University of Buffalo, said he wasn’t the best player on the team but he was always eager to put in the extra effort to please his coach.

“Coach was the type of person that you wanted to make proud of you,” said Fields on the district website. “He taught me that attitude was just as important as ability. In four years I may not have scored a touchdown or even made one catch, but I had a work ethic to move forward in life. Thank you coach for making Colonie a special place … the man, the myth, the mustache.”

Matt Tarullo, a South Colonie Physical Education teacher today, played football for Ambrosio in the late 1990s. Following graduation he went on to star at Syracuse University and then in the National Football League.

“He made me realize great things were possible as an athlete,” said Tarullo, and with his guidance “I exceeded expectations at each level I played. Later, I got to work with him as a peer and a coach and he taught me the importance of accountability. I take that with me as I raised my daughter today. Those were the components of life he helped me with.”

The Kind Human campaign, for which the Kind Human Award was named, was adopted by the high school student group iCARE this year as part of its goal to raise money and educate people about domestic violence in support of Equinox in Albany. iCARE also sponsored the Sixth annual Raiderfest — a spring event to draw the community together for fun, games and education.

Prior to each Raiderfest, a ceremony is held outside the high school front entrance at the Hill of Heroes, a monument created a few years ago to honor military, police and first responders. This year, two new benches were dedicated at the “hill” to U.S. Army Sgt. George J. Schupp and the Lawlor Military Family. Also unveiled were the new paver stones which will line the monument and make a Pathway of Heroes.