Monolith Solar is on a time crunch 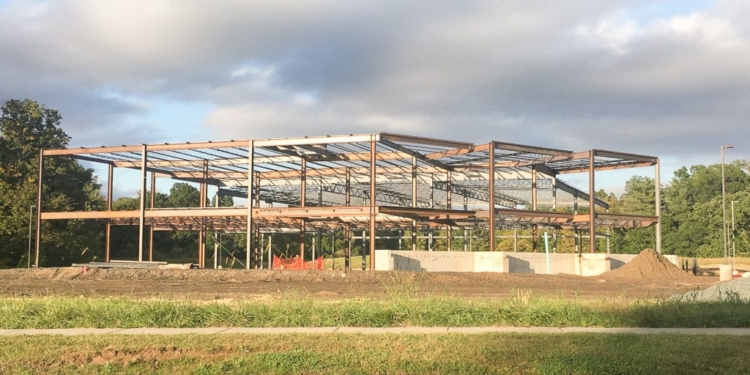 BETHLEHEM — Solar panel installation company Monolith Solar has not provided any updates nor information since the town’s Dec. 21 Industrial Development Agency (IDA) meeting regarding how it plans to move forward with construction of its incomplete Slingerlands headquarters building at the Vista Technology Campus.

The IDA had requested Monolith Solar to maintain some communication with them in the meantime so that it would not have to wait until the next IDA meeting on Friday, Jan. 25 to learn of any new updates.

Both Bethlehem Planning Division Director Robert Leslie and IDA Executive Director Thomas Connolly confirmed the lack of communication from Monolith Solar to Spotlight News on Friday, Jan. 4. While Spotlight News reached out to Monolith Solar requesting comment, a representative declined for now, citing lack of staff availability due to the recent holiday season.

The lack of updates poses the question as to whether the company is able to restart construction on the aforementioned building, which had ceased abruptly in September 2017. More than 50 workers were furloughed that same month too. Leslie said that he was “informed by a stormwater officer” that the site is in compliance as a shutdown site though in terms of stormwater management and sediment control; however, it lacks some form of security fence which the town had requested.

Adding to the town’s concerns are the site plan which expired on Thursday, Dec. 13, after having received two 90-day extensions — it was originally issued back in March 2015. The building permits will expire on Thursday, Jan. 31. In order to continue construction, the company is required to reapply with the Bethlehem Planning Board for re-approval of both documents.

“Getting approval from the Planning Board shouldn’t be an undertaking because the plans from the previous application can be used again for this new application,” said Leslie during the aforementioned Dec. 21 IDA meeting.

In addition, Monolith Solar is also facing at least three lawsuits from other companies alleging that it has not paid its bills, the most recent was filed by Solar Foundations USA in early December. The company had named Chris Stroud as its new CEO in late October after the previous one, Mike Hickey, left after one year in office for a job at Siena College.

Steve Erby, the owner of Monolith Solar appeared at the Dec. 21 IDA meeting, saying that while he does not have many reassuring updates, he said that the company has been working with both  Columbia Development developer Joe Nicolla and Pioneer Bank, which was financing the construction, to resolve the situation. He also confirmed that the company is “still operational on a very small basis … our headcount is about 30 people, we have called back a few people that we had furloughed.” He did not reveal the exact number of returning employees though.

When asked if Monolith Solar still has the budget and resources to complete the construction project, Erby said, “We do and we have outside turnaround consultants from KeyBank which are helping us with that and they’ve done a phenomenal job. The revenue for 2019 is projected right now to be a gross of … I believe we’re in the $60 million to $70 million range.”

He also revealed that there is “no timeframe right now when the project would be resolved” and that the company had  “hoped for an April restart construction timeframe, but now, we’re hoping for January 2020, but only after going through the Planning Board process.”

He concluded, “It’s a shame, it’s a beautiful building.”

For now, Monolith Solar employees are working out of a Rensselaer office since leaving Corporate Woods.

The next IDA meeting, which is expected to include discussion on Monolith Solar, is scheduled to take place on Friday, Jan. 25, beginning at 8 a.m., inside Bethlehem Town Hall, located at 445 Delaware Ave. in Delmar.