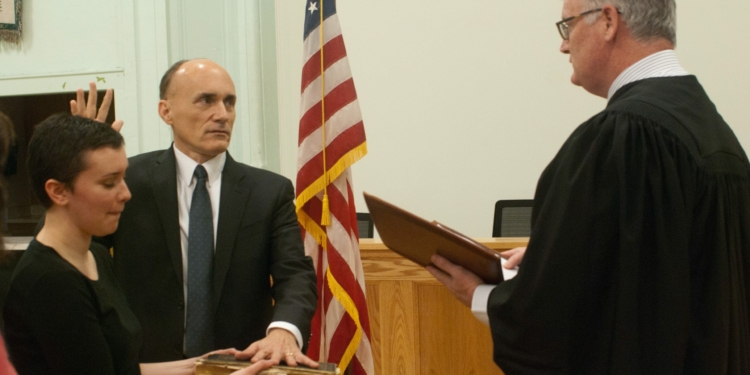 Dan Coffey, above, places his left hand on a family Bible while being sworn in as a Town Board member. Diego Cagara / Spotlight Newspapers

BETHLEHEM — New Town Board member Dan Coffey and returning Town Justice Ryan T. Donovan were officially sworn in during a ceremony held on Thursday, Jan. 3 at 5:30 p.m. at Town Hall with their respective families, colleagues, supporters and other town officials in attendance.

Coffey, who ran on the Democratic line, takes over Giles Wagoner’s seat and is serving a one-year term which expires on Dec. 31.

Donovan, who assumed office in mid-2006 and ran unopposed in last year’s election, will now serve another four-year term through Dec. 31, 2022.

Town Justice Andrew W. Kirby administered the oath of office to both.

Following applause and swift photo-taking sessions with their own families, each gave brief individual speeches afterwards.

“I came up with the three C’s and that kind of summarizes my feelings about Bethlehem and what we’re going to be working on, moving forward, and that’s Community, Character and Continuity,” Coffey said. “Bethlehem has a unique community feel that no other place in the Capital District has. We’re five miles from downtown Albany yet you got a nice small-town feel.”

Coffey, who was born and raised in Plattsburgh, recalled first setting foot in Bethlehem in 1983 when he was still enrolled at Union College in Schenectady and his roommate brought him over to Bethlehem’s town park to play hockey.

It was there where he first took notice of and liked the small town environment.

He said his family relocated to Bethlehem later in October 1999 and has grown to enjoy places including the Delmar Farmers Market, the Albany County Rail Trail and the Four Corners.

Looking ahead, he brought up working on the comprehensive plan update, welcoming public input, and considering what Bethlehem should look like within the next two decades.

He concluded with desiring more connectivity among residents and businesses in town, and better pedestrian safety via sidewalk improvements.

Donovan, a lifelong Bethlehem resident, expressed his gratitude for serving his hometown for more than 12 years.

He also brought up the importance of balancing rehabilitation with incarceration and law enforcement, and “to come into each case with as much human compassion as possible while still keeping our town safe.” Donovan made special mention of Bethlehem Police, a department he often works closely with, as being “exceptional … and they deserve a lot of credit. I think we’re very lucky.”

Monolith Solar is on a time crunch