Build it so they stay away: To make Albany Shaker Road more drivable, you have to make it less appealing to drivers 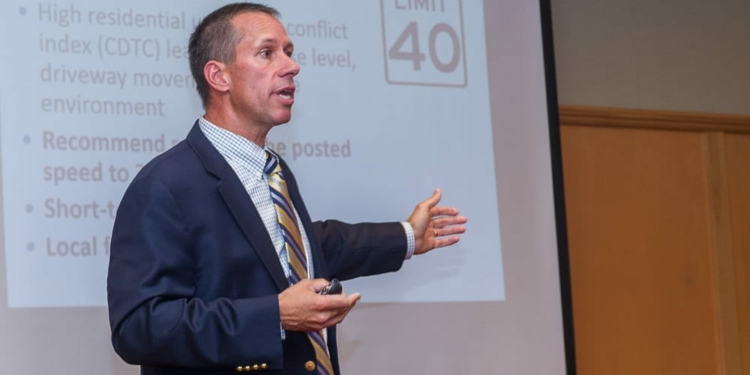 COLONIE — It stands to reason, if you create better traffic flow on Albany Shaker Road, more cars will come.

On the flip side, if you make it too hard to drive to keep cars away, it will negatively impact those living along the road who don’t have a choice but to drive it every day.

“Our job was to make recommendations to mitigate traffic concerns and enhance the character of the corridor,” Adams said. “Those two objectives often conflict each other.”

Forty percent of the some 16,000 vehicles that use Albany Shaker Road every day are just passing through. That fact, though, did little to satisfy the standing room only crowd at the Shaker Road Loudonville Fire House on Thursday, Sept. 6.

One sure-fire remedy to help the traffic issue, said Don Adams, a senior project manager at Creighton Manning, the Albany-based company that headed up a months-long study of the corridor, is to keep the cutting through cars off the two-lane street and keep them on either I-90 or I-87.

The recommendations were categorized as long term, medium term and short term and the relative time frames were directly tied to funding.

The multi-million dollar expansion of the Albany International Airport and surrounding roads will have a positive impact on Albany Shaker Road traffic and traffic in the entire general area.

“Exit 4 interchange increases a lane in each direction in vicinity of Albany Shaker Road,” Adams said. “That is right now a bottle neck, and when traffic backs up there we see people looking for the path of least resistance and we see traffic on Albany Shaker Road. That additional lane on 87 will provide relief on 90 and Albany Shaker Road.”

There are also hundreds of acres still open for potential development on or near Albany Shaker Road, but Adams said the current infrastructure should be sufficient for 20 more years even if the vacant land is developed. That finding was scoffed by those in attendance who claim traffic is already a disaster so adding to it will make it more of one.

The company, in conjunction with the Capital District Transportation Committee, did come up with a host of recommendations to make Albany Shaker Road safer, including reducing the speed from 40 mph to 30 mph.

There were 368 crashes along the corridor that runs from Everett Road to the Maxwell Road Circle. The crashes were split, with 50 percent at the major intersections and 50 percent between with the latter being mainly rear-ends.

“Slower speeds are safer,” Adams said unequivocally, adding the speed limits on similar roads like Maxwell and Sand Creek and Osbourne, Maxwell are all 30 mph.

“If you make it 30 mph you are going to back traffic up to Albany,” said one woman in the audience. “We live on Albany Shaker Road and don’t have a choice, so making it 30 mph will not help us at all.”

Right now, Adams said to a skeptical reception, the average speed on Albany Shaker is 30 mph during the peak hours of roughly 7 to 9 a.m. and 4 to 6 p.m. when it is often stop and go. Over a 24-hour period the average speed is 35 mph. And he had a difficult time explaining how reduced speed would help traffic flow.

“If we can discourage people from using it [Albany Shaker Road] and staying on 87 and 90, that’s the roads they are supposed to be on, it will help traffic,” he said.

Driver feedback signs facing both directions were also recommended to remind people of the speed limit and how fast they are going.

Albany Shaker, a major thoroughfare dating to when the majority of Colonie was farmland growing food for the more metropolitan City of Albany, is county owned but the town could have a say in reducing the speed limit.

“The speed limit is a double-edged sword, it will improve safety but it could slow things down a little,” said Supervisor Paula Mahan. “But the bigger advantage is that it will deter people who are passing through from using Albany Shaker Road and the side roads. If you make it more difficult for people, you will have a larger percentage staying on the highway.”

Also adding crosswalks is not an expensive safety measure but can cost up to $30,000 if curb cuts are required and there is accompanying lighting synched with street lights. To add a street light can cost $300,000, he said.

“All these recommendations require money and that is one of the challenges going forward,” Adams said, adding the town and county should make a list of priorities and chip with at least one project a year.

A roundabout on Osborne Road would cost about $2.5 million he said. But, opening up that intersection is a double edged sword too because while traffic would flow easier, it will also allow more cars to enter Albany Shaker.

Extending sidewalks down at least one entire side of Albany Shaker Road will cost up to $1.5 million.

the street because there is only two walkways, there is one up by the school and the other one down by the middle school,” said John Shafer, who lives on Exchange Street. “You can only do so much with the traffic, which is horrible, terrible, but you have to make it safe for the kids.”

Adams said the town and county with state help should make a list of priorities and then, depending on funding, chip away at the list with perhaps one project a year.

“I am hoping the presentation and the comments made by the public will allow the county and town the opportunity to put together a list of priorities that will mitigate traffic, plan for the future and protect our neighborhoods,” said Albany County Legislator Paul Burgdorf, who represents the Shaker Road area. “The study suggests increased traffic is the new normal. It says a 5 to 10 percent increase in traffic is acceptable. I’m not sure I believe that and I think we have to look closely at all these major parcels and we may have to consider down zoning so vacant parcels are not developed to their maximum potential.”

Two parents of school age children at Shaker Elementary School spoke on the intersection of Shaker El, a small side road off Albany Shaker Road that leads to the elementary school, and the fact there is nothing there to slow traffic at all.

“Essentially that intersection needs to be safer. Aside from the crosswalk that is there now there needs to be crosswalks on all sides of that intersection,” said parent Rosa Azadian. “There needs to be flashing lights that, ideally, would be flashing at the start of the school day from 8:50 to 9:25 a.m., and then again at pick up time from 3 to about 3:30 p.m. That would give buses a chance to get out of there and parents’ cars and staff the ability to get out of there and make it safer.”

“And there is no crossing guard,” said parent Christy Field, who has two children at the school. “We would like a blinking light to help parents and busses get out of the school and to make people on Albany Shaker Road aware there is a school and a crossing guard when the kids come into school and leave school for the day.”

Mahan said the town assigns and pays for crossing guards and the great majority have been at the same location for years. The last new one was added at Shaker Middle School after a pedestrian was struck by a vehicle.

“It’s a matter of bringing these concerns to our attention and that is the mechanism that starts the conversation,” Mahan said. “And we bring those concerns to the Highway Safety Committee who looks at it in depth with the school district and they bring a recommendation to us.”

Signaling has been changed to allow lead cars to make a left hand turn into The Crossings, a bottleneck when events are happening – and even when the sun is shining and people en masse want to use the park.

An additional 42 parking spots will be added to and 30 stalls already there on the southwest side of the park which can be accessed by Metro Park, a street off Wolf Road. Vehicles will not be able to cut through but it will allow more people to use what is considered the back end of the park that includes a large field, a pavilion and bathrooms.

Mahan said to make it more attractive, the town has secured funding for a new playground in that section of the park.

“Most people right now are using the other end of the park, where there is the pond and the playground but this will help spread out the congestion,” Mahan said.