As Helderberg Hudson Rail Trail grows in popularity, leaders look to how it can be optimized for business 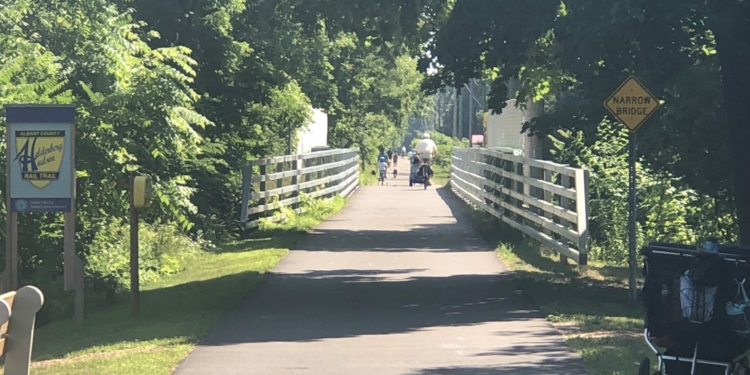 Standing in front of dedicated benches and several pieces of equipment on which trail users can now do various types of exercises, McCoy said, “We have to encourage people to live a healthier lifestyle.” He commented specifically on the cultural attachment to technology that often hinders youth and adults from getting outside and walking, running or biking, and emphasized the success of the rail trail, which saw more than 200,000 users last year.

The county, in cooperation with the Town of Bethlehem and the Mohawk Hudson Land Conservancy, has been looking at ways to improve the trail for more users, the last section of which was paved this summer. Both bike repair stations and sunscreen are available along the trail, and CDTA Cycle! bikes are available to rent on the south end of Pearl Street in Albany.

Now, there are also three workout stations between Bethlehem and Voorheesville, outfitted with simple equipment such as pull-up bars, stepping stairs and a slanted “body curl” station.

MHLC has also implemented a bench program, selling cedar benches that can be dedicated to a loved one for $500 that will be placed along the rail trail for users to take a break, relax and enjoy their surroundings. Details can be found on the MHLC website, under the Rail Trail tab.

“The sky is the limit,” said County Legislator Joanne Cunningham, who represents central Delmar, where one of the fitness stations is located (behind the Bethlehem Veterans Memorial Park). According to Legislator Lucille McKnight, who represents the district in Albany where the rail trail begins, there has been talk of adding little free libraries along the trail so users can have a seat and read a book on a nice day.

The county legislature is also working to allow trail connections to local businesses, beginning with Bliss Juice Bar in Delmar, which is expected to open later this summer.

“We’re working to expand our view of the rail trail from being a corridor through town to being an integral part of town,” said Bethlehem Town Supervisor David VanLuven. “For example, {we]want maps or signs or apps that showcase the great restaurants and shops near the rail trail so more users visit our businesses. And we want more connections between the rail trail and surrounding streets to make it easier for people to get on to the trail – and also off from it.”

Calling the rail trail a “tremendous resource in the community and a great way for people to get out and enjoy nature and connect with other people,” MHLC Director Mark King said, “It’s a place where people can really enjoy the great environment that we live in.”

“This has exceeded every expectation in terms of use, in terms of increased property values, in terms of economic development,” said state Assemblymember Patricia Fahy. Noting that the success of the Albany County rail trail has helped to spur other similar trails around the state, including the Empire State Trail, Fahy said she hopes to see those trails increasingly connected to each other. She said she has already secured grant money to connect the trail to the Hudson River.

“This really is a regional asset,” said Legislator Bill Reinhardt of Bethlehem, talking about possibly connecting the rail trail to trails in Rensselaer and Guilderland. Reinhardt also made a special point to thank the MHLC volunteers who work to keep the trail safe and clean.

McCoy commended the county departments of Public Works and Parks and Recreation for the work they have done, thanked Fahy for securing funding that helped build the trail, and thanked the county legislature for supporting the project as well. He thanked VanLuven and the Bethlehem Town Board, as well as ART, the group that is working to bring art to the rail trail.

“We’re trying to enhance it for everyone,” said McCoy. “People that just want to take a stroll; someone that wants to take their little kids and get them tired so they take a better nap; people that want to ride their bikes or roller blade.”

During the 20-minute press conference, trail users went by on foot, pushing strollers, riding bikes and, in one case, on a motorized scooter with giant tires.

Spotlight on Finance: Long-term care can help you plan for the unexpected