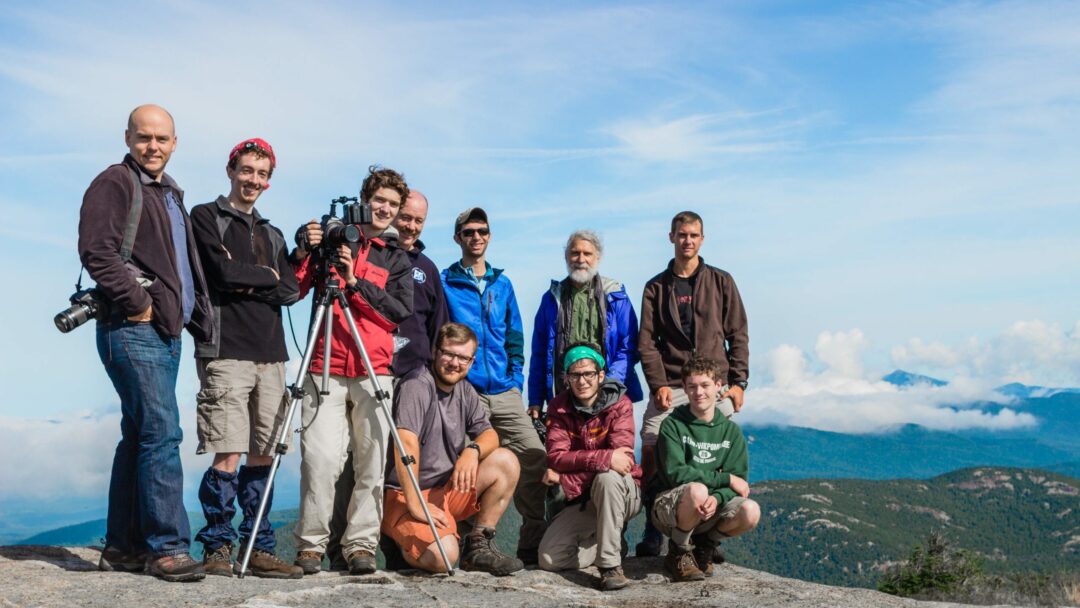 Blake Cortright and crew atop Cascade Mountain while filming "The 46ers" Photo submitted.

On Aug. 1, 1918, two brothers, Bob and George Marshall, and their guide, Herb Clark, climbed Whiteface Mountain, a high peak in the Adirondack Mountains.

Earlier this year, ADK 46er No. 10,871 was given a certificate and welcomed into the group of hikers who navigated all 46 Adirondack peaks that stand more than 4,000 feet above sea level.

(Actually, there are only 42 above the storied 4,000-foot threshold. The other four’s true stature was discovered when surveying equipment became more sophisticated. But the 46ers are steeped in tradition, and you can almost hear the old timers: “If I had to go up Cooch, that young fella has to, too.” Cooch, formally known as Couchsachraga, is the most remote, the muddiest and one of the most despised tree-lined peaks of the 46 and perhaps the entire world.)

There is a party planned for Friday, Aug. 3 through Sunday, Aug. 5 to commemorate those three ground-breaking gentlemen and to celebrate the nearly 11,000 who survived the thick, sticky mud, the miles of unmarked trails, the mud, the black flies, the mud, the unpredictable, erratic weather, the mud, the long, long days, the mud, some pretty hairy rock scrambles and otherwise rugged terrain — and the mud.

It can get pretty sloppy, but as any conscientious hiker worth his boots will say – “you go through it not around it.” Going around it will just make the bog bigger, the trails wider and accelerate erosion.

So, you get a good pair of boots and go through it.

The reasons people go through it, though, are as varied as the trails.

“We all have different reasons for it, and people who don’t hike can appreciate it, but they don’t really understand it,” said Blake Cortright, who interviewed dozens of hikers for “The 46ers,” a documentary he fimed and directed.

For some it’s a healing thing. Nature does wonders to mend a broken heart, or a broken life, and sitting on top of Gothics eating a PB&J has a way of putting things in perspective. For others, it’s more spiritual. Others may just like walking in the woods.

For others, No. 46 might represent a checkmark on a bucket list. Or a healthy activity to share with friends or family or as a way to meet new people. Or maybe just the quest for a decent selfie to post on social media. And there are those with motivation driven by ego and “peak-bagging.”

Or, maybe, simply to satisfy a sense of adventure. “Because they were there” is trite, but it very well could, and probably does, apply to some of the nearly 11,000 46ers.

Of course, there are the views. Some are just spectacular, and words cannot do them justice. But it can’t be just that either. After walking hours and hours over miles and miles, some summits offer nothing more than a gold and brown sign tacked onto a tree designating the spot as somehow more special than the spot

Outside of a one-on-one chat with a 46er, why someone does all 46 is a trivial discussion. What the 46ers stand for is not.

“The club is dedicated to protection of the Adirondack environment, to education in Adirondack wilderness ethics, and to participation in work projects in cooperation with the state Department of Environmental Conservation to meet these objectives,” according to its mission statement.

The Adirondack Park encompass six-million acres. It is the largest publically protected park in the lower 48 states by a long shot. It is bigger than Yellowstone, The Everglades and Grand Canyon National Park combined. But it’s the high peaks that are the big draw and the core of those — Marcy and the Great Range — are the biggest draw of all.

Whatever the reasons, more people are flocking to the high peaks than ever before. And more people are doing all 46. In 2017, 735 were admitted into the 46ers club, breaking the previous record set in 2016.

Unfortunately, of the thousands and thousands who don’t have any intention of completing all 46 but still hike the Adirondacks, there are some who just don’t know how to treat what is a national treasure right in our backyards.

Leave No Trace — a responsible hiker’s mantra — by an abundance of ego and/or lack of anything remotely civil, is routinely ignored by many.

Conservation efforts, like whether to allow access to the 20,758-acre Boreas Pond Tract with public roads, are being debated rather than classified preserved.

The 46ers are growing at a time when stewardship is needed most.

Trail maintenance, especially the unmarked trails that are cared for by the DEC, lean-to construction, repair and maintenance, trailhead stewards to inform people of what they are getting into and to answer questions and general advocacy and education are all part of being a 46er. Countless hours are volunteered by members for the lofty goal of preserving the Adirondack experience.

For Cortright, love for the Adirondacks started in 2012 with a father and son hike up Marcy, the state’s tallest mountain at 5,343 feet above sea level. For good measure, they tacked on Phelps and Tabletop too.

Like so many, the stunning view from the top captured the imagination of the then Shaker High School student and aspiring filmmaker who two years prior, while in the 10th grade, produced a documentary about the first Boy Scout encampment in the U.S.

“I’ve never seen it done justice on film. I’ve seen incredible photographs but never film or video,” he said during an interview. “And then I began wondering why people do all 46 of these because we were pretty worn out after three. So it all started with being inspired by how beautiful it is and a question: What draws people to the Adirondack High Peaks and then what changes them from casual day hikers to a 46er? This kind of willingness to go through these crazy things.”

He said he interviewed one woman who would leave Ontario on Friday, drive eight hours and sleep in her car or stay with friends, hike all weekend and drive back Sunday night.

“She had been doing it for a year and a half and she doesn’t know why she does it. She said she loves it there and ‘it feels like home,’” he said. “One way to describe the film is a love story between the mountains and the people who climb them.”

The film features stunning videography and interviews with long time advocates, long time hikers and includes footage of the 46er’s matriarch Grace Hudowalski, who became 46er No. 9 in 1937.

“Leaving the superb job Blake did with filming aside, it was more substance than style,” said John Sasso, a long time 46er who does hours of volunteer work with the group. “That is, I think many of us were concerned that the 46ers film would come off as something flashy, that would hype up the 46ers and make it testosterone-driven with little if any content in regards to what the organization and its founders really stood for and promoted — not just tackling such a challenge, but embracing the environment and gaining a sense of stewardship of it.”

“The 46ers” is a documentary that took 100 hours of footage, a number of interviews and a shoe-string budget. It took Cortright and company two years to shoot and another year to write and edit.

Cortright pitched the idea to Dan Swinton, who headed up production at Mountain Lake PBS in Plattsburgh, and he became the executive producer. PBS has since aired the documentary on 26 stations in 15 states.

In 2015, the film started showing in theaters “and we were selling out and people were calling the theaters and asking for extra screenings or were trying to get a hold of the film. We didn’t realize what we had until all that started.”

He wanted to make two points: We are all stewards of the mountains, and climbing the high peaks is not a typical walk in the park.

One New York City couple he featured were travelling around the world and decided to do some hiking. The weather changed, the man got hypothermia and died.

“I wanted to bring some gravity to it. it’s one thing to hear ‘cotton kills’ but it’s another to hear a true story about it. This is not the place to wear jeans and a hoodie,” he said.

He does acknowledge the increased number of people hiking the high peaks, and understands his film may contribute to that. But, he would like people to a come away with sense of stewardship and respect for the mountains too.

“What I hope, what will be awesome, is that people will see the reverence the 46ers have historically, and continue to hold, for the mountains and the great lengths and the decades of effort that have gone into stewarding them,” he said. “So in a sense it might increase the number of people that are coming, but people who do come because they saw the 46ers film, will have an understanding or even a love for the mountains and the care that goes into it.”

The Memorial Hike. Each of the 46 peaks starting at the major trailheads. Participants will dress in attire and use gear from 1918. All hikers will be staged and scheduled to reach the different peaks between 11:30 a.m. and noon.

A round table discussion on how the peaks have changes since the Marshall brothers’ first ascent. Starts at 7 p.m. at the Saranac Lake Trudeau Laboratory.

A barbecue at Paul Smith’s College.

For more information visit the 46ers website at adk46er.org

As Helderberg Hudson Rail Trail grows in popularity, leaders look to how it can be optimized for business