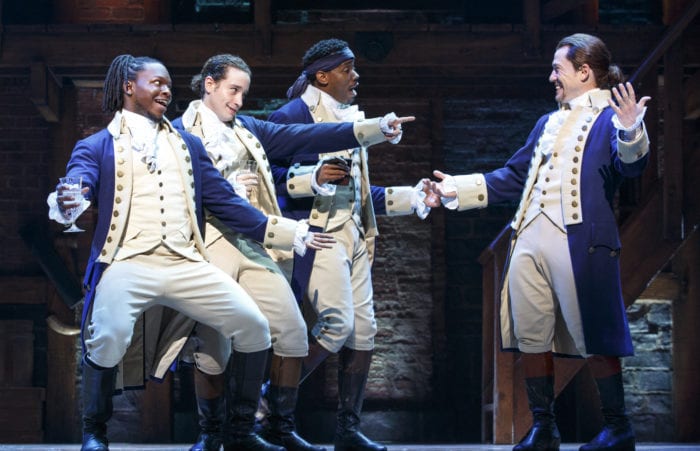 SCHENECTADY — Though the cat was let out of the bag last year at this time, Proctors’ upcoming 2018-2019 season is jammed with celebrated shows you won’t want to miss.

Proctors hosted its annual announcement bash on Monday, Feb. 12, promising a full slate of award-winning productions both in Schenectady and the Capital Repertory Theatre for next season.

None of which are as anticipated as “Hamilton.” Winner of 11 Tony Awards, a Grammy and a Pulitzer Prize, the Lin-Manual Miranda musical has been so popular since its 2015 debut, Proctors let its patrons know last year that it was coming to town.

“Hamilton” is the story of America’s Founding Father Alexander Hamilton, an immigrant from the West Indies who became George Washington’s right-hand man during the

Revolutionary War and was the new nation’s first Treasury Secretary. Featuring a score that blends hip-hop, jazz, blues, rap, R&B and Broadway, Hamilton is the story of America then, as told by America now.

The Tony and Grammy Award-nominated musical “Waitress” is coming to Proctors next June.

Inspired by Adrienne Shelly’s beloved film, the musical tells the story of Jenna—a waitress and expert pie maker, who dreams of a way out of her small town and loveless marriage. A baking contest in a nearby county and the town’s new doctor may offer her a chance at a fresh start, while her fellow waitresses offer their own recipes for happiness. But Jenna must summon the strength and courage to rebuild her own life.”

The annual announcement bash was highlighted by news of the return of some crowd favorites, too.

Another local favorite is Chazz Palminteri’s “A Bronx Tale. A story of a young man caught between the father he loves and the mob boss he’d love to be. Bursting with high-energy dance numbers and original doo-wop tunes from the songwriter of “Beauty and the Beast”, “A Bronx Tale” is an unforgettable story of loyalty and family. It comes back to Proctors for five days, from Tuesday, Oct. 23 to Sunday, Oct. 28.

Below is a full breakdown of upcoming shows for Proctors and the Capital Repertory Theatre.

From the Tony Award®-winning creators of Ragtime, this epic 2017 Broadway hit takes us from the twilight of the Russian Empire to the euphoria of Paris in the 1920s, as a brave young woman sets out to discover the mystery of her past.

Broadway’s hit crowd-pleaser takes you to the stoops of the Bronx in the 1960s—where a young man is caught between the father he loves and the mob boss he’d love to be. Bursting with high-energy dance numbers and original doo-wop tunes from the songwriter of Beauty and the Beast, A Bronx Tale is an unforgettable story of loyalty and family.

School of Rock is a New York Times Critics’ Pick and “an inspiring jolt of energy, joy and mad skillz!” (Entertainment Weekly). Based on the hit film, this hilarious new musical follows Dewey Finn, a wannabe rock star posing as a substitute teacher who turns a class of straight-A students into a guitar-shredding, bass-slapping, mind-blowing rock band. This high-octane smash features 14 new songs from Andrew Lloyd Webber, all the original songs from the movie and musical theatre’s first-ever kids rock band playing their instruments live on stage. Vanity Fair raves, “fists of all ages shall be pumping!”

Roald Dahl’s amazing tale is now Schenectady’s golden ticket! It’s the perfect recipe for a delectable treat: songs from the original film, including “Pure Imagination,” “The Candy Man” and “I’ve Got a Golden Ticket,” alongside a toe-tapping and ear-tickling new score from the songwriters of Hairspray. Get ready for Oompa-Loompas, incredible inventions, the great glass elevator, and more, more, more at this everlasting showstopper!

“The women of Waitress are changing Broadway!”—Time Magazine.

“It’s an empowering musical of the highest order!” raves the Chicago Tribune.

Inspired by Adrienne Shelly’s beloved film, Waitress tells the story of Jenna—a waitress and expert pie maker, who dreams of a way out of her small town and loveless marriage. A baking contest in a nearby county and the town’s new doctor may offer her a chance at a fresh start, while her fellow waitresses offer their own recipes for happiness. But Jenna must summon the strength and courage to rebuild her own life.

Hamilton is the story of America’s Founding Father Alexander Hamilton, an immigrant from the West Indies who became George CapitalWashington’s right-hand man during the

Revolutionary War and was the new nation’s first Treasury Secretary. Featuring a score that blends hip-hop, jazz, blues, rap, R&B and Broadway, Hamilton is the story of America then, as told by America now.

Dr. Seuss’ How The Grinch Stole Christmas! The Musical

Discover the magic of Dr. Seuss’ classic holiday tale as it comes to life on stage. Featuring the hit songs “You’re A Mean One, Mr. Grinch” and “Welcome Christmas,” The Grinch discovers there’s more to Christmas than he bargained for in this heart-warming holiday classic. Max the Dog narrates as the mean and scheming Grinch, whose heart is “two sizes too small,” decides to steal Christmas away from the Whos, an endlessly cheerful bunch bursting with holiday spirit. Celebrate the holidays with the show The New York Times calls “100 times better than any bedtime story!”

The Phantom of the Opera

Cameron Mackintosh’s spectacular new production of Andrew Lloyd Webber’s The Phantom of the Opera will make a triumphant return to Schenectady as part of its North American Tour. Critics are raving that this breathtaking production is “bigger and better than ever before” and features a brilliant new scenic design by Paul Brown, Tony Award-winning original costume design by Maria Björnson, lighting design by Tony Award-winner Paule Constable, new choreography by Scott Ambler and new staging by director Laurence Connor. The production, overseen by Mackintosh and Matthew Bourne, boasts many exciting special effects including the show’s legendary chandelier. The beloved story and thrilling score—with songs like “Music of the Night,” “All I Ask of You” and “Masquerade”—will be performed by a cast and orchestra of 52, making this Phantom one of the largest productions now on tour.

The Book of Mormon

The New York Times calls it “the best musical of this century.” The Washington Post says, “it is the kind of evening that restores your faith in musicals.” And Entertainment Weekly says, “Grade A: the funniest musical of all time.” Jimmy Fallon of The Tonight Show calls it “Genius. Brilliant. Phenomenal.” It’s The Book of Mormon, the nine-time Tony Award-winning Best Musical.

This outrageous musical comedy follows the misadventures of a mismatched pair of missionaries, sent halfway across the world to spread the Good Word. Now with standing room only productions in London, on Broadway and across North America, The Book of Mormon has truly become an international sensation. Contains explicit language.

Taking place at theREP and Proctors, NEXT ACT! New Play Summit, now in June, invites patrons to go behind the scenes to experience how play development happens, and hear readings of works from both seasoned playwrights and the Young Playwright Contest. Attendees have the ability to weigh in on what world premiere will grace theREP’s stage during the 2019-2020 season! Free as a try-me for all subscribers.

Ring of Fire: The Music of Johnny Cash

Take an exuberant ride on the rails, into the backwoods and onto the wide-open highway with the music of Johnny Cash! This remarkable story—created by Richard Maltby, Jr. and conceived by William Meade—is brought to life with 38 foot-stompin’, emotionally-packed songs, such as “Country Boy,” “A Thing Called Love,” “Folsom Prison Blues,” “Daddy Sang Bass,” “Ring of Fire,” “I Walk the Line,” “I’ve Been Everywhere,” “A Boy Named Sue” and “Sunday Mornin’ Comin’ Down.” Performed by a multi-talented cast of actor-musicians, this tale of family, humor, tragedy, sin and redemption is filled with colorful characters and exhilarating music worthy of a legend!

Jay “The Sport” Jackson needs one more win to become heavyweight champion of the world, but in the Jim Crow reality of 1905 America, his greatest opponent may not be in the ring. Inspired by the true story of trailblazing boxer Jack Johnson, The Royale bristles with the thrilling rapid-fire dialogue and rhythmic punctuation of playwright Marco Ramirez (Netflix’s Daredevil, Orange is the New Black). This powerhouse of a play brings to explosive life the ultimate fight for a man’s place in history and packs a punch that will leave you breathless.

Spend the holiday season with your favorite Pride and Prejudice characters, as they gather at Pemberley, the stately home of Mr. and Mrs. Darcy. In this charmingly imagined sequel to Jane Austen’s masterwork, the ever-dependable Mary Bennet is growing tired of her role as the dutiful middle sister in the face of her siblings’ romantic escapades. When the family visits for Christmas, an unexpected guest sparks Mary’s hopes for independence, an intellectual match and, possibly, even love? This unstuffy, highly entertaining and warm-spirited play (by Lauren Gunderson and Margot Melcon) will delight Austen aficionados and newcomers alike—just the kind of experience multiple generations can enjoy together!

Everyone wants to know, “What’s the matter with Robert?” Since becoming an empty-nester, the usually solid and dependable professor seems to be falling apart—just like the old red maple tree in the backyard. When friends get together for a cheer-him-up dinner, Robert announces he’s had an epiphany that will rock the world of the stalwart suburban gang around the table. Things get shaken and stirred as the cocktails and confessions flow, building to a hilarious crescendo when an interloper arrives, begging another question, “Guess who’s coming to dinner?” Written by Capital Region veteran actor/writer, David Bunce, this uproarious world premiere comedy, set in the suburbs of Albany, was the runaway hit of the most recent NEXT ACT! New Play Summit.

Young Will Shakespeare has writer’s block … the deadline for his new play is fast approaching but he desperately needs some inspiration. That is until he finds his muse—Viola. This beautiful young woman is Will’s greatest admirer and will stop at nothing (including donning a mustache) to appear in his next play. As love blossoms, so does the comedy, great romance and playwriting. Join theREP for this immersive and sumptuous Lee Hall adaptation of the Academy Award-winning screenplay (by Marc Norman and Tom Stoppard), complete with swordfights, secret trysts, backstage disasters and a dog. “Marvelously fluid, riotously funny and often intensely, even startlingly poignant,” says the Chicago Tribune. “This may be, in part at least, a comedy about Shakespeare falling in love; but joking aside, it could just make you fall, all over again, in love with Shakespeare.”

SPOTTED: Seniors step up, and The Jets beat The Storm 5-0