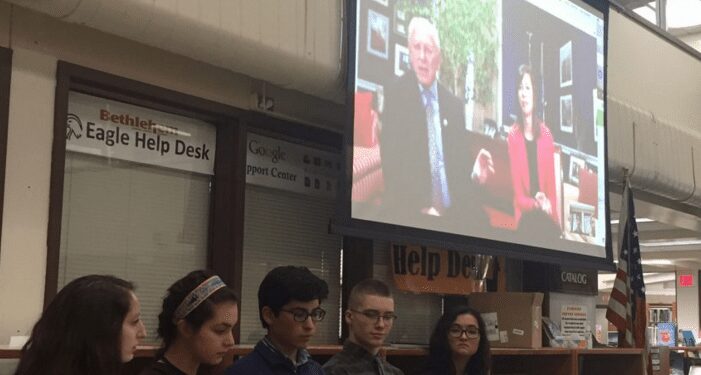 Last December, Rosenworcel was one of only two commissioners on the five-member FCC to vote against rescinding net neutrality regulations, implemented in 2015 under Democratic FCC Chairman Tom Wheeler. The net neutrality rules essentially classified internet providers as telecom providers, giving the FCC broad powers to regulate providers on everything from prices to privacy practices. Rosenworcel agreed to speak to the students after SPAS club members reached out to the FCC with their concerns about the decision would impact students and other internet users.

The 3-2 decision was split along party lines. Both Democratic FCC Commissioners — Rosenworcel and Mignon Clyburn — voted against repealing the regulations, while all three Republicans voted to repeal, including Chairman Ajit Pai. (Pai released a video the night before, featuring himself dressed as Santa clutching a fidget spinner, brandishing a lightsaber and Instagramming his food to mock widespread criticism against the contentious move.)

During the net conferenced discussion via Google Hangouts, curious students wanted to know what, exactly, net neutrality is. SPAS President Connor Chung, a junior at BCHS, negotiated the conversation on behalf of Bethlehem, relaying questions from students to Rosenworcel and Tonko during the half-hour discussion. When the internet connection failed on more than one occasion, both students in Delmar and Rosenworcel’s and Tonko’s staffs in Washington, D.C. joked about how the failures were apropos to a conversation about internet reliability.

Essentially, providers will now be permitted to block or favor certain websites, affecting how quickly they download compared to other sites. Opponents of the decision believe it will result in unfair competitive advantages, especially for larger companies, and could negatively impact freedom of speech on the internet.

“Net neutrality, for me,” said Tonko, “is about freedom: Freedom of speech, of opportunity, of being able to interact with the world.”

“The future of the internet is the future of everything,” said Rosenworcel. “It’s where we connect, it’s where we create, it’s where you’re going to share ideas, build community and, in time, probably build businesses. I think it’s important that we make sure that that platform is as open to as many ideas and services as possible, and has as few gatekeepers as possible.”

Asked what happens next in the fight for net neutrality, Rosenworcel said she sees several things that could impact her agency’s decision, including: legal challenges to the FCC vote; legislation at the state level that would supersede the federal decision; efforts in Congress, like a bill sponsored by Tonko that could roll back the decision; or other long-term legislative solutions.

Tonko, who represents the school district in the U.S. House of Representatives, is co-sponsoring a bill that he hopes will ensure net neutrality. The Capital Region, he said, is a mecca of innovation. “Greater Albany,” he said, “was cited as the third best in the country for innovation job growth.” According to Tonko, innovation businesses and start-ups of all kinds are dependent on an open internet for their success

He also thanked SPAS for the invitation to speak and commended the club for its tenacity in seeking out information about the FCC decision to end net neutrality. Tonko said he is concerned that a lack of open internet access could present roadblocks for students who rely on connectivity for homework and to complete college applications.

Bethlehem board gets down to business in first meeting of 2018; appoints, organizes, appreciates