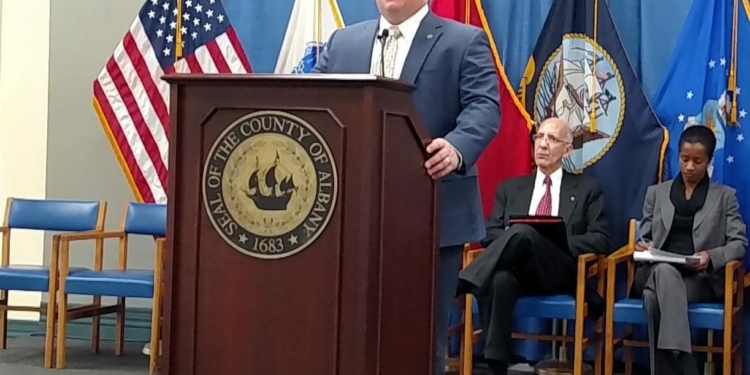 ALBANY COUNTY — County Executive Dan McCoy announced this morning, Friday, Jan. 5, that his office has filed a federal lawsuit against national pharmaceutical manufacturers that argues they should be held accountable for employing deceptive practices which contributed significantly to the opioid crisis currently affecting Albany County and rest of the nation.

McCoy was joined by Elizabeth Smith from Motley Rice LLC, the law firm representing the county in the case.

“One of the biggest crises affecting our community is the ongoing opioid and heroin epidemics,” said McCoy. “It is unacceptable that our families, friends and communities continue to experience devastating heartbreak over the loss of life, just so these pharmaceutical companies can get rich. Today’s litigation puts these companies on notice that Albany County will not tolerate their actions anymore.”

In 2014, opioids as a class generated $11 billion in revenue for the pharmaceutical companies, according to the Office of the County Executive, which maintains it is a direct result of deceptive marketing from these companies, which has resulted in the over-prescribing of their drugs.

Per McCoy, Albany County had 11 heroin related deaths, eight deaths from opioid pain reliever overdoses, and nearly 1,200 unique clients admitted to treatment programs for heroin and other opioids in 2016, who said the epidemic is costing the county millions of dollars for treatment, law enforcement and other related costs.

According to McCoy, while Albany County is among one of the first municipalities to bring suit against big pharma — in this case, Perdue, Endo, Teva, and Janssen — it is the first to invoke the Violations of Racketeer Influenced and Corrupt Organizations Act (RICO) to claim that the companies are collectively guilty of engaging in racketeering by engaging in deceptive practices, knowing their products are addictive, with the intent of making money.

Of the other three charges brought by the suit, two invoke state law to allege false advertising and engaging in deceptive acts or practices in the conduct of business, trade or commerce. The third argues that the way the companies have conducted themselves constitutes a public nuisance.

For all four charges, the county is seeking damages. For the public nuisance charge, it is also seeking a permanent injunction prohibiting the named companies from “further statutory violations and from engaging the acts and practices that caused the public nuisance.”

Any money awarded to the county would go toward  treatment, services and programs for those impacted by the epidemic.

Woman arrested for trying to bring stolen handgun on airplane