ALTAMONT – In the middle of the rides and carnival games, the greasy food and cotton candy, the music and spirits, there is some serious business going on at the fairgrounds.

There is a story behind each of those colored ribbons tacked to the pens holding the sheep, rabbits, goats, cows and birds people peruse in between a ride on the Sea Dragon and taking a selfie with the World’s Smallest Woman – or at least the smallest woman in Altamont during fair week.

At the Altamont Fair, there are two types of competitions, those open to anyone and those sponsored by 4-H. Open competitions have been around as long as fairs, and there have been fairs in one form or another going back to the Old Testament.

By comparison, 4-H is the new kid on the block. The umbrella group that includes clubs across the country and around the globe is widely thought to have been started by A.B. Graham in Clark County, Ohio in 1902 and were known as the “Tomato Club” or the “Corn Growing Club.” In 1910, the clover pin with an “H” on each leaf was developed and two years later the loose knit network of clubs became known as 4-H, according to the 4-H website.

“You learn a lot of common sense. Like sometimes when you are working with them they want to bite you and sometimes they are nice,” said Selkirk 9-year-old Ashlyn Burns, while at the Poultry Building on the day she and her Silver Sebright hen 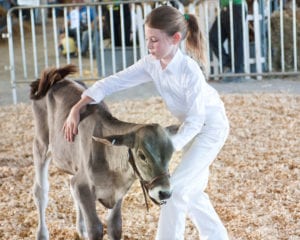 Alexandra won best in show. “You also learn about responsibility. I have to clean my ducks and all that, and help feed and water the birds every day. It’s hard but it’s fun.”

To prep the birds for competition, the Ravena-Coeymans-Selkirk student said, she had to clip its beak and nails and give it a bath and fix the feathers to make it look nice for the judges.

Her mom, Heather Burns, who is also involved in the Caps n’ Chaps 4-H Club in Delmar, said finding and grooming competition birds starts shortly after it hatches. 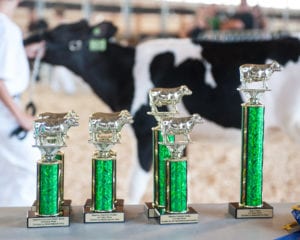 standards, or the physical characteristics a perfect specimen should have regardless if it’s a chicken or a cow. And the same type of care and preparation goes into each animal before it steps into competition if it weighs two ton or two pounds.

“Probably at least an hour a day since the end of March,” said Bethlehem High School student 15-year-old Holly VanWie, who was crowned Master Showman on Thursday, Aug. 17, about the preparation she put into her cow Blossom. “I like spending time with the animals I really appreciate the knowledge the judge gave me and how to get better in the future.”

Click here to view a photo gallery of this year’s Altamont Fair.

The 15-year-old VanWie said she is still deciding whether to go into nursing or veterinary work but regardless of which direction she chooses she will take lessons learned during her time in 4H with her.

“It’s given me some really good opportunities already,” she said. “Like this summer, I went to Cornell and studied there for a week.”

Her mother, Terry VanWie, a proprietor of Meadowbrook Farms in Clarksville, echoed Heather Burns, and said while the competitions are fun and it’s what the kids look forward to each year, it’s not the most important thing 4-H offers.

“They work hard, and they have  wonderful time and this is such a great reward for them to show the animals they work with all

year,” she said. “It gives them a great direction and life-long skills, not just how to show the animals but lot of other things they have gotten involved in. And they have lasting relationships with kids from other school district they wouldn’t otherwise meet.”

“We spend a lot of time in the barn talking, and it’s quality time with your kid doing something we both enjoy doing,” said Heather Burns. “Electronics are not the only thing in the world. There are all sorts of other things out there, hands on things, you can do that are a lot of fun.”

“I spend more time with my birds than I do on my tablet or watching TV,” chimed in Ashlyn with a proud smile.

Eileen DePaula, a 4-H educator for 16 years, said there are a 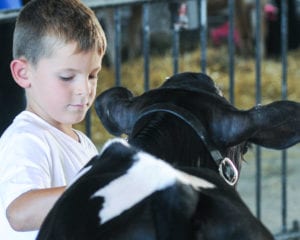 host of local clubs geared towards a variety of interests from arts and crafts to gardening to the animals. 4-H, she said, is open for children 5 to 18 and has an emphasis on positive youth development and life skills.

She called social media a wonderful tool and used by the individual groups to communicate with each other and with different groups when they are not participating in a joint activity. When they are, though, the cell phones go away.

And despite having the world at your fingertips, so long as there is a cellular connection, and a laundry list of other activities available to youth and their parents, she said local 4-H numbers have remained steady.The 4-H Clubs in Albany, Schenectady and Green Counties are run out of the Cornell Cooperative Extension office in Voorheesville. 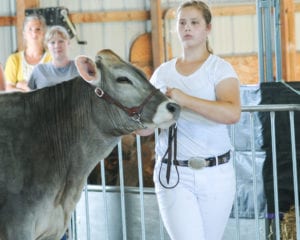 “With sports and school and most of the parents working two full time jobs there are only so many hours in the day,” she said. “But what we do is important, and all our club leaders are volunteers who go above and beyond – especially during fair week. Kids need adults in their lives and they need to know someone is there to talk to them if they need it.”

A farm-to-table tale for kids

A farm-to-table tale for kids