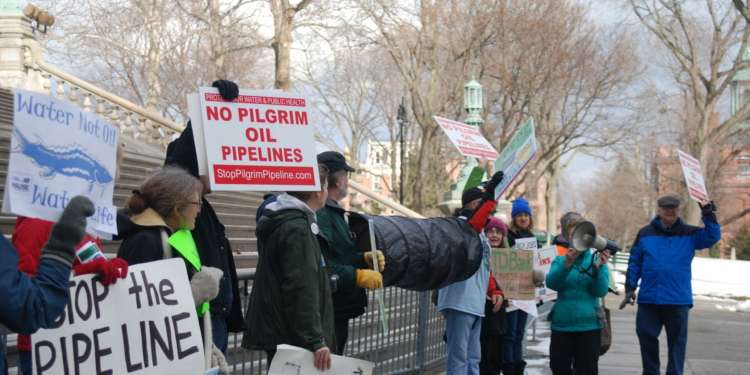 Protesters against the Pilgrim Pipeline gather at the steps of New York’s Capitol Building. (Photo by Ali Hibbs / Spotlight News)

ALBANY — During his first week in office, the new president took aggressive action against policies intended to protect our natural environment. Locally, New Yorkers have stepped up their calls to state and local governments to strengthen environmental protections.

The Tuesday after his inauguration, Pres. Donald Trump signed two executive orders to move forward with construction of the Keystone XL and Dakota Access pipelines. He has taken steps to silence the Environmental Protection Agency (EPA), the U.S. Department of Agriculture and our national parks. He has attempted to censor the EPA’s page on climate change, while planning to slash staffing and funding for the agency and halt a host of initiatives.

And then there are his nominees for positions that would control environmental policy — nearly all of whom have a record of supporting the fossil fuel industry at the expense of the environment.

Environmental advocates are now looking to local and state officials to mitigate the damage likely to be done by such regressive environmental policy.

Earlier this year, kids in Hoosick Falls, along with Environmental Advocates of New York (EANY) and EffectiveNY, launched a campaign and released videos calling for a constitutional right to clean air, water and environment. Weeks later, two South Albany residents —10-year-old Lawrence, a resident of Ezra Prentice Homes, which sits right next to train tracks carrying potentially volatile oil-laden train cars, and Willie White, a community leader and executive director of A Village, Inc. — took up the campaign and released videos of their own.

“This is the basketball court, this is the playground, that’s where I live, and there’s the train tracks,” said Lawrence, pointing out places all just a few feet away from where he was standing. He said that he can sometimes smell gas when he waits for his school bus in the mornings.

“We’ve identified a lot of different issues: asthma, emphysema, bronchitis, thyroid issues, and on and on and on,” said White of health ailments that affect residents in South Albany. “This is living proof that New York needs a Constitutional amendment for clean air, for a clean environment, for all New Yorkers.”

The Ezra Prentice Homes Tenants Association, along with Albany County, Earthjustice, Sierra Club, Center for Biological Diversity, Riverkeeper, Inc., Scenic Hudson, Natural Resources Defense Council and Catskill Mountainkeeper, are also filing a federal lawsuit against Global Partners, an oil company operating at the Port of Albany, claiming that it is operating without a valid Clean Air Act permit. According to Albany County, the permit for the facility expired last March and, in September, state Department of Environmental Conservation (DEC) notified Global that the company’s request to renew the permit was being denied. Global was required to submit a new permit application with substantial additional information concerning the environmental and public health impacts of crude oil operations at the Albany facility.

“As the battle to protect the Hudson River and surrounding

communities from the devastation of crude oil transport in the region rages on, we will not sit idly by as Global violates the Clean Air Act in new ways,” said Riverkeeper attorney Abigail Jones.

On the same day Albany County announced its intention to sue, another environmental advocacy group protested a potential pipeline outside of TD Bank in downtown Albany, where they distributed literature about the bank’s funding of the Dakota Access Pipeline and the Trump-revived Keystone XL pipeline before marching across the street to the Capitol building.

At the Capitol, they called Gov. Andrew Cuomo on cell phones and asked him to block the potential Pilgrim Pipeline, a pair of parallel pipelines between Albany and New Jersey, one of which would carry crude oil southbound from Albany and another that would carry refined petroleum products such as gasoline, diesel, heating oil, and kerosene, northbound into Albany.

The protest was part of a week-long call in campaign to Cuomo by Food and Water Watch and the Coalition Against Pilgrim Pipelines. “Given the climate denying policies of the federal government such as the approval to build the DAPL and KXL pipelines,” said Diana Wright of PAUSE, “any and all actions at the state level to stop fossil fuels are of critical importance. New York can lead the nation in climate action.”

“Despite the climate denial we see from President Trump and the Republican Congress, the science is clear,” said county Legislator William Reinhardt (D-33). “To avoid climate disaster for humans and our communities, we must take very aggressive steps to leave fossil fuels in the ground and not continue building fossil fuel infrastructure that will be obsolete on the day it is completed.”

“States are going to have to lead on climate,” said EANY Executive Director Peter Iwanowicz, “because nothing is going to happen in Washington, D.C. in a positive way.”

Unlike the Keystone XL and Dakota Access pipelines, because pipelines currently proposed in New York would not cross international borders, the federal administration does not have the power to approve them, said Iwanowicz. “This is something that the states decide.”

EANY is currently working with state senators Diane Savino and Neil Breslin, and legislators from both parties to update proposed legislation — titled the New York State Climate and Community Protection Act — in light of the events of the past weeks. In addition to that bill, which would establish a climate action council, a working group to address issues facing disadvantaged communities and more, EANY is also working to pass legislation that would constitutionalize environmental rights.

“What we’re trying to accomplish is to establish a right to drink water that’s clean, to breathe air that’s not going to make you sick and to live in a safe climate,” said Iwanowicz. “By just a straight-up legislative amendment to the bill of rights.”

The bill would have to pass both houses of the legislature in two successive sessions, he said, and then go before voters. Currently, Article I of the state Constitution identifies 15 rights held by New Yorkers; the legislative amendment would add the right to drink clean water, breathe healthy air and live in a safe environment.

The addition of environmental rights to the state Constitution would require state government to consider whether decisions being made might negatively impact those rights. “Any decision made by the executive or the legislature has to be weighed against whether it would violate someone’s rights,” said Iwanowicz. “Lawyers in all the various government agencies would have to weigh all of their state decisions against this right.

“We need to see strength in our political leaders,” he said. “I’ve spoken to people all across this state who are consistently surprised they lack the legal right to clean water and healthy air. We’ve seen time and again in other states and countries that a constitutional right is often the only legal avenue people have against decisions that harm their health.”

Citing Hoosick Falls and South Albany, Iwanowicz said, “In both cases, residents have had to fight tooth and nail for government to stand up for them.”

“We continually assess opportunities to grow our infrastructure and add value for our shareholders,” said Richard Wheatley, director of public affairs for Kinder Morgan, when asked if the Texas energy giant intends to revisit plans for a pipeline that would run through parts of Selkirk and New Scotland. Last May, the company withdrew a federal application after facing opposition from residents and elected officials, citing unfavorable market conditions.