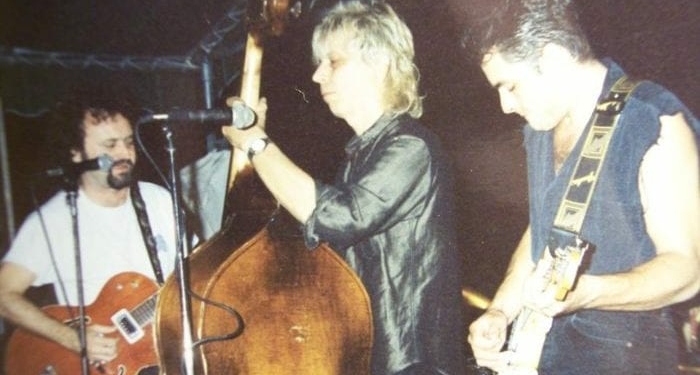 Tinsley Ellis, Buck Malen and Scotty Mac play together at Castaways in Troy sometime in the mid-'90s. Malen passed away on Sunday, Nov. 13 at the age of 66. (Photo Buck Malen / Facebook)

ALBANY — The Capital District lost a beloved figure in the music scene earlier this week. A memorial service was announced last night to help celebrate the life of Buck Malen, who died Sunday, Nov. 13, at 66.

“It’s with great sadness that we share this news today,” stated Malen’s from his Facebook account. “Our dad passed away peacefully, by our side late last night. The outpouring of love has been truly tremendous. He was so involved in the music and art community of Albany- and so greatly adored. We know him as a father, brother, musician, photographer, hairdresser, joke teller, artist- the list could go on and on. We realize so many of you are grieving with us. He had such a great impact on so many lives. How wonderful to have known someone so creative and inspirational. For that, we should celebrate.”

Malen played in bass and rhythm guitar for numerous local bands over the years, since returning to Albany from Florida in the early 80s. Those groups included French Letter, Johnny Rabb & the Jailhouse Rockers, the Jivebombers, the Staynz, Susan & the Surftones and the Buckadelics.

“I respected and admired his playing and commitment to the Albany music and art scenes,” said Val Haynes, lead singer for Fear of Strangers. “In all of our encounters he was gracious and witty. My sincere condolences to his family and friends.”

In recent years, Malen emceed the Blue Monday Blues Jam at Pauly’s Hotel in Albany. In a statement Pauly’s Hotel recognized him for starting the weekly blues show.

“His long list of contributions to Albany music scene, along with founding our weekly Blues Jam at the bar, will never be forgotten. … Thank you for so much Buck!!”

Pauly’s Hotel hosted a special jam session the following Monday with several artists performing to honor Malen. In addition to the live show, many friends and area musicians from the past thirty years expressed condolences on social media. Art Fredette of The Lawn Sausages, credited Malen for keeping the music scene together.

“Even when the music scene was dying in the ‘80s, he kept it together,” said Fredette. “Certain people are glue, and Buck was one of those cats. People like him had a connection with everyone. … He wasn’t a selfish player, either. He was about doing what the group could do.

“It was always just about the music.”

“Buck Malen was an amazing mix of talent, generosity and genuine cool,” said Eck. “A great musician and photographer; kind and funny as hell (especially if you were on his early internet joke list); and a genuine rock and roll fashion plate with the dark shades, dangling cig and Chuck Taylors. His sweetness will be missed.”

David Decker, who played along side Malen with The Shakes, remembered a creative artist with a “commitment to excellence.”

“Buck has been an extremely creative and influential force in the greater Capital Region’s music scene for as long as I can remember,” said Decker. “And, having played with him years ago, in a band called, “The Shakes”, I can tell you first-hand…he wore his “commitment to excellence” on his sleeve with every endeavor he took part in. He was truly a genuine, very thoughtful, and extremely funny guy…he came up with what is still one of my absolute favorite band names, ever…he had a five piece band, and simply called it, “Slaughterhouse-Five”…absolutely freaking brilliant name! It’s a damn shame – Buck Malen will be sorely missed.”

When Malen wasn’t playing music, he was also known as a hair stylist, something Fredette took note of as he shared how he wished to accept the news of his passing.

A benefit celebration is planned for Sunday, Dec. 18 at The Hangar in Troy.

HOT SPOT: Stand up comedians at ViaPort in Rotterdam