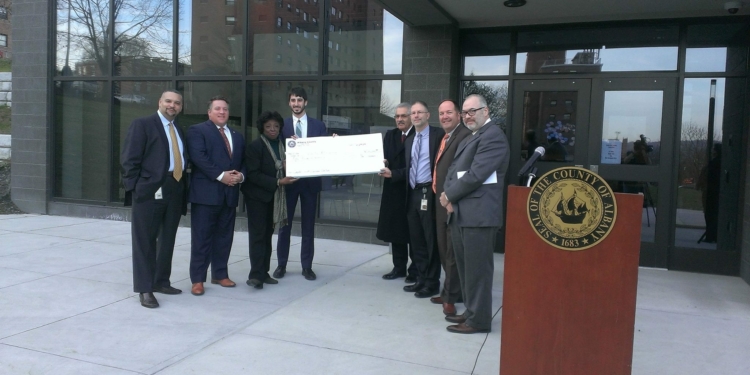 ALBANY COUNTY— There was a considerable amount of confusion among county legislators at their monthly meeting on Monday, Nov. 14, as they debated whether to honor a promise made to Trinity Alliance in late 2015, stemming from the fact that no one seemed to know exactly who promised the $50,000 or why it was never paid.

“At that press conference last December with Luci McKnight, and the county executive was there too, and the majority leader,” said Legislator Sam Fein (D-6), “we presented Trinity Alliance with a big check of $50,000. They were promised the money and they’ve been waiting for the money ever since.” He said the nonprofit is facing financial difficulties due to the fact they have been counting on money they never received.

The only documentation to support the item on the agenda, which authorized the payment for Trinity’s Capital South Campus Center, was a letter sent from Trinity CEO Harris Oberlander and Board President Gregory Stapleton to Majority Leader Frank Commisso (D-11) and County Executive Dan McCoy on Oct. 7. The brief letter inquired about the outstanding payment, stating, “the delay in payment is causing unplanned fiscal strain upon our agency.”

Fein, however, said the oversight was brought to his attention months ago. “I worked with legislative leadership on trying to figure out why they hadn’t received the money they were promised,” he said. “We eventually came up with this solution to get them their money because this is something that was promised and . . . it seemed like the right thing to do.”

Among the 36 legislators in attendance, none argued that Trinity was undeserving of the promised funds, but no one seemed to know where the money would come from, who agreed to pay it, or even whether due process had been followed.

Initially, Deputy Majority Leader Lucille McKnight (D-1) said that Key Bank sponsored the donation and the money was provided by them. Legislators continued to question where and whence the funds were until Commisso countered her and said that Key Bank had nothing to do with the $50,000. (In fact, Trinity originally sought the funding to meet a $100,000 matching grant offered by the bank.)

Legislator Paul Burgdorf (R-23) stood up and suggested the money be taken from a special projects fund, saying, “I don’t think we spent the whole $275,000 that we had there.” Burgdorf said he was in favor of supporting Trinity, but wanted to be sure things were “done the right way.”

Chairman Sean Ward (D-16) responded that he was uncertain that fund would cover the entire amount and said, “The right way is whatever this legislature decides to do.”

“Could somebody, then, before we vote, please tell me where the money is coming from in the budget,” said Burgdorf, at which point Legislator Charles Dawson (D-35) stood up holding a copy of the budget and challenged members to show him the line item where the appropriation had been approved. No one did.

“I’m told,” said Ward, almost seven minutes into the discussion, “that it is in a contingency account.”

“But how did it get into the contingency account?” asked Dawson, who received no clear response.

“If we did this back in December of ’15, then why haven’t they gotten the money yet, in November ’16, ” asked Legislator Gil Ethier (D-18), saying he was confused. If the money wasn’t coming from Key Bank, he wanted to know, “Will they be getting the money from us?”

Calling the services provided by Trinity to Albany’s South End community “critical,” Legislator Doug Bullock (D-7) blamed the legislature for neglecting to appropriate money to honor the promised payment and urged that they vote to remedy the situation.

“Why didn’t anybody know about this,” pressed Ethier, mentioning the Dec. 10 press conference where Fein, McKnight and Commisso presented Trinity with the large, symbolic check. “Where was the money to back up the check?”

Ultimately legislators seemed to accept the $50,000 would be drawn from a contingency account that Ward said he was certain was well-funded, but several members were still disgruntled about the way the appropriation was being approved; several pointed out the money was promised under an entirely different sitting Legislature and that the new body is composed of 14 new members who would have had no way to know about, much less approve, the expenditure.

“I’d love to give money to Trinity,” said Legislator Todd Drake (R-19). “But that’s not the issue. I think the issue is just how it was presented to the body.” Noting the clear confusion among his fellow legislators, Drake said, “At least some of us expect to understand what we’re doing.”

“The question is whether a group of legislators can make a promise in December of 2015 that the legislature is now expected to agree to,” said Legislator Mark Grimm (R-29). “And on an appropriation that hasn’t even been referred to committee for review. That, I think, is the problem here.” Grimm said that he thought legislators shouldn’t make financial commitments of that nature without the approval of the entire legislative body.

Rather than a handful of legislators, however, it appears the promise may have been made by the county executive himself. While his office insists that he put the matter before legislative leadership so that they could commit the funds, Commisso ostensibly said he found out about the grant when McCoy called upon him and the other legislators to attend the December press conference, later stating that there had been discussion of the matter “at some point.”

According to Mary Rozak, McCoy’s director of communications, the county executive became aware that the nascent Capital South Campus Center was publicly seeking funding last year. A Sept. 16 post on his public Facebook page shows McCoy with Trinity Alliance CEO Harris Oberlander, following a tour of the facility. After determining that their mission aligned with county priorities in South Albany, such as education training, Rozak said he convened legislative leadership to recommend that they appropriate funding to support it. “He called in leadership,” she said. “Frank Commisso and, I know Luci [McKnight] was at the press conference, but I don’t recall any of the other legislators that were there—but it was a leadership discussion at that point.”

Admitting that she was unaware whether minority leadership was present, she said, “I don’t recall the nature of the discussions; I know the majority office was involved.”

“It came to our attention that the county was going to have Key Bank and ourselves ante up funds for the start-up of the Trinity Alliance educational park,” said Commisso. “At that time we were called into a conference at the facility and Key Bank presented a check and Albany County did also.”

“That was a legislative press conference, from the legislature, with the county executive, where they were assured that there would be money coming,” said Rozak, maintaining that, after McCoy presented legislative leadership with the grant opportunity, the specific details were in their hands and that he had nothing to do with identifying a funding source. “It was the legislature and the legislative majority behind it. The county executive in this office does not, and cannot, simply say we’re going to be giving money. That’s not what this office does.”

“I just got a call from the county executive’s office inviting me to the press conference, notifying me that the county was giving $50,000 to Trinity Alliance,” said Fein. “And I gladly accepted because I was familiar with them and the Capital South Campus Center and all the good work that they do.”

Calling the check presentation a “formality” that he “happened to be at,” Commisso said he didn’t know where the funds were going to come from at the time. “Did we know they were going to come out of contingency? Not exactly. When we realized that there had been an oversight on the part of someone, that’s when we discovered that they had missed a step here. And we brought it up to the legislative body.”

“It was my understanding, since we gave them one of those big, fake checks, that the funding was figured out,” said Fein, who still implored the legislature to vote to honor the inscrutable promise on Monday evening. Noting the services the center provides to the community, he said to his fellow lawmakers, “They now really need this money. They’re short on funds and this resolution is very important to the continuing operation of the Capital South Campus Center.”

When Ward finally called for a roll call vote, Ethier asked the legislature’s counsel if the action was legal and was laughed at by the chairman, who proceeded with the vote.

The measure passed by a landslide, with 31 members in favor, four opposed, and Ethier simply saying, “Do what you want.”

“My vote was not about the merits of the proposal,” explained Legislator Joanne Cunningham (D-34), saying that her decision to oppose the resolution not an easy one. “I’m a big fan of that organization and the work that they do. My issues was process and there was really, I thought, a lack of information about where the funding for Trinity was coming from. Usually when proposals are voted on, they’ve gone through a committee process where there is a discussion. I gathered this was a little bit unorthodox because it hadn’t gone to the Audit Committee or any committee to be considered. There wasn’t any documentation about where the $50,000 funding was coming from.”

No online video seems to currently exist of the Dec. 10 conference, but a non-functioning link to Time Warner Cable News posted on the Trinity Alliance website bears the headline, “Albany County Awards Trinity Alliance with a $50,000 line item in the 2016 Budget.”

“I voted no on the resolution for several reasons,” said Legislator Alison McLean Lane (D-14). “I am unsure who brokered this arrangement as the details are vague at best, there is no signed contract for services, there was no allocation in the budget, and awarding non-profits this level of funding without any contractual service obligations is unprecedented in my time with the county.”

Following the meeting, some legislators cynically joked that all that must be required to secure taxpayer funds for chosen programs in their own districts are a press conference and a giant check.

“It was all done in good faith,” said Commisso, denying that’s what happened. “The process may seem somewhat awkward, but everything was definitely discussed, so on and so forth. Sometimes we have to go to contingency.”