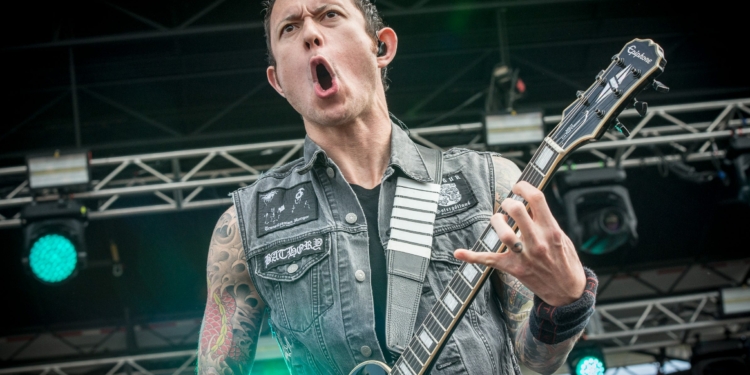 “Who here is actually from Schaghticoke?” asked Lzzy Hale, the lead singer and guitarist of Halestorm, to a crowd of thousands on Saturday night. “Like, 10 of you?”

She had a point. The rural Rensselaer County village has an official population of 592, per the 2010 U.S. Census.

But at this weekend’s Rock ‘N Derby festival at the Schaghticoke Fairgrounds, the small town could be heard for miles around. Over 50 metal bands — defined liberally enough to classify Lamb of God and Collective Soul under the same umbrella — performed over three stages and three days in the first-ever iteration of the festival.

The top stage, the Derby Stage, may have been a bit far, located at the other end of the property from the other performance sites — the Rock N’ Stage and the Arena Stage — but it was worth the walk, especially with bands that appealed to the younger crowd. Five Finger Death Punch, A Day to Remember and Shinedown each had a night to headline and play hits to the enamored patrons banging their heads in the lawn.

The latter two groups each paid acoustic homage to Lynyrd Skynyrd with A Day to Remember jamming to “Sweet Home Alabama” and Shinedown getting its crowd to sing in on the band’s now-famous rendition of “Simple Man.”

But the crowd was more than a chorus; it looked the part too. Speckled in the audience were masks matching those of Ghost and Hollywood Undead, locks of hair that covered faces like Claudio Sanchez from Coheed and Cambria and Capital District heritage representing the area’s own State Champs, who played their punk rock on Saturday afternoon.

At the Rock N’ Stage, the first generation of metal fans found its home. On Saturday night, Anthrax and singer Joey Belladonna turned the calendar back to 1987 with “I Am the Law” and “Caught in a Mosh.” The upstate New York vocalist’s energy was apparent throughout, straining his vocals as the crowd echoed his chants and fistpumps.

On Sunday, the second stage rocked out to Sixx:A.M., led by Mötley Crüe bassist Nikki Sixx, before Megadeth arrived in an atypical somber mood, given the circumstances.

In the light of the previous night’s news — the passing of the band’s former drummer Nick Menza — the performance was emotional, including a 30-second moment of silence in Menza’s honor, before a drum solo that perhaps honored the man just as well. Candles and flash-lit iPhones waved in the wind as Dave Mustaine’s voice trembled for his original bandmate.

Inside the Arena Stage screamed the loudest bands of the weekend, as the tattooiest metalheads of all moshed and danced in the dust of the indoor venue: a horse stable. Amid the smell of dung and hay, bands like Beartooth and Rings of Saturn ricocheted their heavy sound waves off the metallic ceiling, creating an environment that was insane at best, and insufferable at worst.

But that was not the only instance of metal crashing on a dirt floor in Schaghticoke over the weekend. On Saturday and Sunday afternoons, an on-site demolition derby provided for an exciting diversion from the noisy rock shows. Cars crunched and engines flared — with volume and with flame — as the drivers fought to the death of their automobiles.

A Day to Remember bassist Neil Westfall tried his luck himself in the treachery as a special guest driver, but the headlining member’s fortunes were quick to fade, finishing 15th in his heat of 18 cars.

Although not guaranteed to turn into an annual festival, Schaghticoke’s first metal weekend seemed to be a success. Some complaints existed  — maybe sweep the media barn next time? — but local vendors made significant profits and visitation numbered in the thousands. For those thrilled to see dozens of their favorite bands in the Albany area, Rock ‘N Derby was not only a Day to Remember, but perhaps a Weekend to Remember.

A Day to Remember – Photo by Jim Gilbert / NYSmusic.com

Summer at the Plaza concerts announced