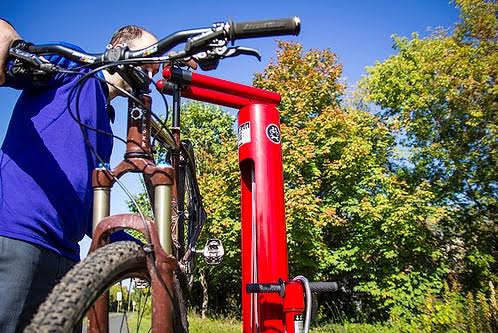 Just ahead of Bike to Work Week 2016 (May 16-20), and in the first consistently beautiful days of spring, Albany Public Library is opening Bicycle Fixit Stations outside three branches in the city of Albany at a special event on Friday, May 13.

At 9:30 in the morning, a group of library staff and local bicycle enthusiasts will gather at the Arbor Hill/West Hill Branch at 148 Henry Johnson Blvd. and ride to the Bach and Delaware Branches to check out the new Bicycle Fixit Stations available for free use by the public. Library officials will be joined by leaders of local bicycle, transportation, and community organizations for a short press conference before getting on their bikes and riding to the Delaware Branch at 331 Delaware Avenue to visit the fixit station there, then on to the Bach Branch at 455 New Scotland Avenue. Community members are invited to participate in the bike ride.

“We’re excited to provide the people of Albany with free Bicycle Fixit Stations at three Albany Public Library branches,” said Scott Jarzombek, the library’s executive director. “There are many recreational cyclists, families, and commuters who can benefit from having easy access to bike repair tools at three locations in the city of Albany. The Bicycle Fixit Stations are another great service the library is proud to provide to the community.”

The Bicycle Fixit Stations are placed outside near existing bicycle racks at each branch and are readily accessible to the bicycle-riding public. The stations contain all the tools riders need to perform basic bike repairs and maintenance, including changing a flat tire, adjusting brakes, and fine tuning gears. Each station includes the following tools: Philips and flat head screwdrivers, various Allen wrenches, headset wrench, pedal wrench, several sizes of box wrenches, tire levers, and air pump. The stands have hanger arms that allow users to spin the pedals and wheels while making adjustments.

“Having available fixit stands at the various Albany Public Library branches, free and available to all riders, will enable those who get around on bikes a quick and inexpensive way to do minor repairs on their bikes,” said Rossana Coto Batres, spokesperson for Capital Region Complete Streets.

“Creating bicycle-friendly environments throughout our communities is vital to ensuring safe and healthy movement for all of our neighbors in the Capital Region,” said Amy Klein, executive director of Capital Roots. “We are proud of our friends at Albany Bicycle Coalition and Albany Public Library for working to ensure this becomes the norm in Albany.”  “I’m excited to see more Bicycle Fixit Stations coming to the Capital Region,” said Ken Crandall of Troy Bike Rescue. “By placing these stations around Albany, we are making it easier for people to choose their bicycles instead of their cars to get around the city.”

Kids to vote on re-design of Elm Ave. park playground

BCHS Principal out on leave