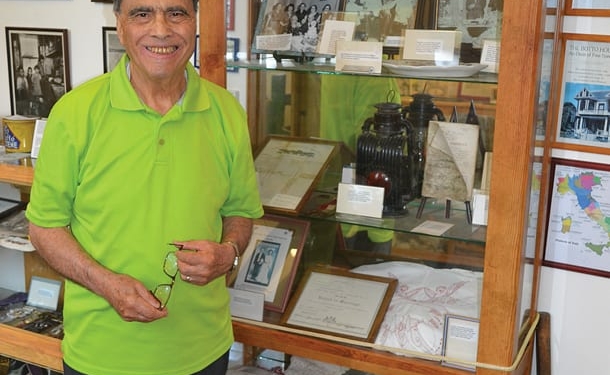 The three-building campus at the Italian American Community Center has been a work in progress for nearly the last decade, but the most recent additions have really topped it off.

In April, an upscale thrift shop was opened that offers handpicked, gently used items. And with the completion of a $50,000 sprinkler system, the museum portion of the complex was able to open a chapel, library and additional meeting room on the second floor.

The thrift shop is built in the 92-year-old building that served as a rectory to the church. The church is now the museum.

The thrift shop is run by Sarah Wellen a retired English teacher who also edits the newsletter, among her many other jobs at the center.

“This is all volunteers that operate the gift shop as well as the museum, and Sarah has done an excellent job. I think you’ll agree it’s not your ordinary thrift shop. All the proceeds go to operate our Italian American Museum,” said Philip DiNovo, director of the museum.

What sets this thrift ship apart is that you won’t find items in poor shape because Wellen and the other volunteers sort through everything to make sure only the best stuff makes it to the racks and shelves.

“We discard about five to 10 percent of what comes in. We want nothing torn, nothing dirty, nothing cracked or chipped. Those are no-no’s for our shop. We want them to be in good enough condition so that people feel comfortable wearing them a second time,” said Wellen.

Wellen said the volunteers work no more than three hours a month in the shop, and she keeps a long list of people available for scheduling. Most of the items are under $10 so that people can afford them. The shop also sells everything from clothing to jewelry and antiques, although jewelry goes the fastest.

According to DiNovo, the Italian American Heritage Museum is the largest museum of its kind with 10 rooms of exhibits, a hall of history and a gift shop. The second floor, which opened in August, has an Italian cultural center, library, chapel and kitchenette.

In the main room, there is a mural on the wall called the Daughter of Recognition tree. The trunk of the tree is shaped like Italy, and on the leaves are pictures of people that have made donations to help with the restoration of the museum.

“People give us money to help us. We’ve put in hundreds and hundreds of thousands of dollars to make repairs, because these buildings were old. We purchased it nine years ago, and it took us five years to remodel the buildings that we own. It took us nine years to get upstairs because we had to put a sprinkler system in,” said DiNovo.

The museum tells the story beginning with life in Italy, explains the reasons people left, what the voyage was like and the passage of the immigrants at Ellis Island. The museum covers everything Italian Americans have contributed to American society, from the sculptors of the Lincoln Memorial to some of your favorite movie stars.

“The purpose of the museum is to honor immigrants, to tell their story and the contributions of Italian Americans,” said DiNovo.

Get To Know: Gail Brown