Let’s get ready to read 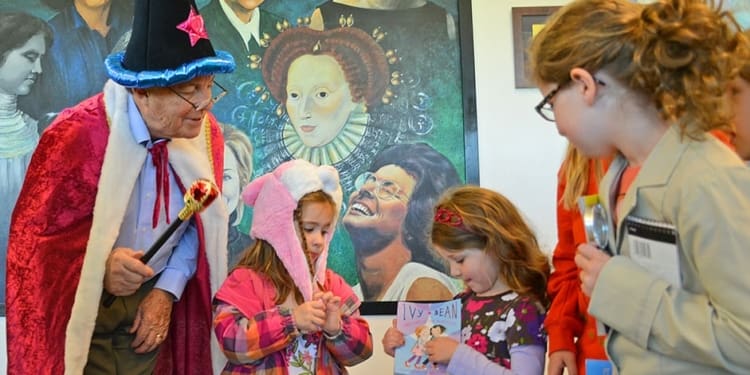 As a kid growing up in Latham, Matt McElligott always knew he wanted to be an artist. Exactly what kind, he wasn’t entirely sure.

“I was always the kid who was drawing all through class,” said the well-known children’s book author and illustrator.

McElligott’s drive and talent led him to study art at Alfred University in Western New York. After graduating, he began work as a freelance illustrator. At that time, his work consisted mainly of creating the pictures to accompany the stories. That was until one day when he found some old films in his family’s attic and was inspired to tell his own story.

“That gave me an idea that maybe there were clues in there that could give me answers to things that had happened long ago,” he said. “So I turned it into a story about a family every year for Thanksgiving – the family gets together from all over the world and has these crazy arguments about things that happened decades ago in the past.

“I pitched it to a publisher that liked it, and gradually my work began to shift from being mainly an illustrator to illustrator/author, and that’s the path it has taken over the last 15 to 20 years,” he said.

This story, entitled “The Truth about Cousin Ernie’s Head,” was the first of 13 children’s books McElligott has written and illustrated.

McElligott is one of 60 authors who will be visiting with children at this year’s Albany Children’s Book Festival, hosted by The Albany Academies.

Now in its fifth year, the event is meant to enable people of all ages to meet some of their favorite authors and illustrators, said Karen Schimmer, the festival’s Founding director.

McElligott said he hopes such festivals bring to light what it means to be an author or illustrator and show kids it’s possible.

“You hear about the doctor, the police and whatever, but you don’t hear about the author or illustrator, even though kids spend a good amount of time in the library surrounded by books – most people in their life don’t regularly run into authors or illustrators,” he said.

As the son of an art teacher, McElligott said he had the opportunity to meet artists as a child.

“I remember meeting some illustrators and some cartoonists that had a big impact,” McElligott said. “Meeting these people in person and seeing what they do, makes the whole idea of becoming an illustrator seem much more possible.”

McElligott also makes a number of visits to area schools each year, reading to kids and showing them the steps it takes to create books.

“What I try to do is show them how that thing they love to do – write and draw – is something that could be a career,” McElligott said.

The festival doors will open at 10 a.m. Children’s book authors and illustrators will be on hand to talk to kids, sign books and hold readings.

Among those appearing will be Wendell Minor, who did “Night Flight” about Amelia Earhart; Susan Keeter who wrote the book “Phillis Sings Out Freedom,” about Phillis Wheatley and George Washington; and Peggy Thomas who did the well known book “Farmer George Plants a Nation.”

In addition, there will be magicians, a children’s concert, clowns and other activities all revolving around the theme of reading.

“It sends a great message that reading is important and what authors and illustrators do is important, and it gets kids excited about books, about reading and about all of these things that we talk about all the time that are at the foundation of what it means to be educated,” McElligott said. “If at the end of the day the kids say, ‘wow if he can do that, I can do that,’ then I have done my job.

The festival will take place on Saturday, April 27, from 10 a.m. to 4 p.m. in the Silipigno Athletic Facility at the Albany Academy for Girls campus located at 140 Academy Road in Albany. The event is free and open to the public. For more information, visit www.albanychildrensbookfestival.com.

Artwork connects the dead and the living

Softball: Bethlehem puts it together