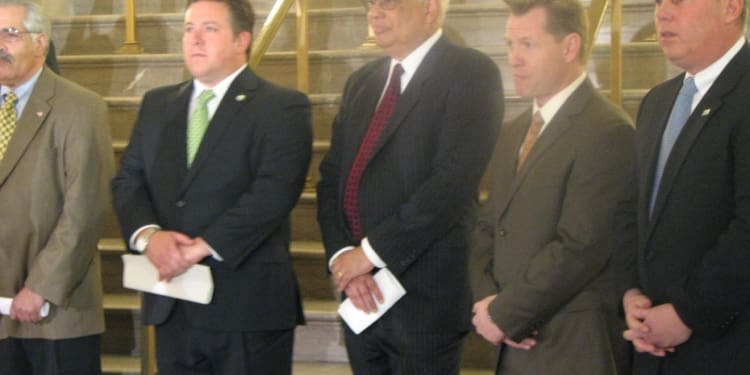 In an effort to provide “higher efficiency” and save taxpayer dollars, Albany County has announced the early results of a multi-year study of possible consolidation of dispatch and emergency services. On Tuesday, March 27, County Executive Dan McCoy announced the City of Watervliet and City of Cohoes would be turning 911 dispatch services over to the county.

“Watervliet and Cohoes residents are winning in two ways: they’ll save money by consolidating dispatch services and get help faster in emergencies by having calls go directly to the county,” said McCoy.

The study was performed through a Local Government Efficiency Grant the county applied for in 2009. Mary Rozak, spokesperson for McCoy, said the study took a look at whether taxpayers were getting “a duplication of services” and how emergency services money was being spent in each municipality.

“Back then it was thought that when 911 was established … if you have a dispatch with local employees they’re best equipped to actually dispatch their own police, fire, EMS because they know the area and they know the people,” said Rozak.

“The study revealed that doesn’t really apply anymore because there is new technology and we have all kinds of advances, better training and teams of people that we call integrated units,” said Rozak.

Watervliet is already online and having 911 calls answered at the county dispatch center in the Village of Voorheesville. There was no loss of personnel because local employees were rolled over on to the county payroll, and Rozak said the city could save between $150,000 and $200,000 for the year.

Cohoes is scheduled to switch service over to the county in a few weeks and could see savings between $400,000 and $650,000, said Rozak, and the county is not seeing any immediate cost increase as a result of consolidation.

“That’s a pretty big savings (for those municipalities),” said Rozak. “At this point we are able to absorb that cost so at this point it isn’t having a financial impact.”

The county extended the consolidation offer to all 19 municipalities and is poised to announce additional partners in the “near future.” Rozak said some towns or cities haven’t yet warmed to the idea of consolidation.

“Often there’s some hesitation because … there is sometimes a mindset that says you want local people and there must be a benefit to having local people right there,” said Rozak.

“Our goal is to provide a high level of efficiency when answering and dispatching 911 calls while easing the burden on the county taxpayers. The transfer of function to the county will save time and money while not jeopardizing public safety,” said Apple.

Once more communities merge into the consolidation, Rozak said the county could potentially see additional expenses, but it would cross that bridge when the time comes.

“When you have more people contributing to one bill it’s not going to cost anything more right now, but should we have to beef up and it costs more in the future, you’re spreading out the amount of money that needs to be divided between participating communities,” said Rozak.

Colonie Police Chief Steve Heider said the town is currently “excluded” from the consolidation but conversations have been had with the county and are ongoing.

“We’re open to any negotiation with the county. We’ve cooperated with their study to date,” said Heider. “I think they’re trying to get some of the smaller towns and we haven’t had those serious discussions yet but I think some new things are coming up.”

Bethlehem Town Supervisor John Clarkson said the town is “looking at it” and has created an internal group made up of police IT staff and a budget advisory team to look at the possibility of consolidation.

“No decisions as of yet but we’re looking at it,” said Clarkson. “It’s really too early to get very specific but obviously a positive is, if we could get service that works there are, in many people’s views, great potential for savings which is why we’d want to look at it. But we want to ensure that the service is acceptable and the systems work together.”

Clarkson said he’s talking to officials in Cohoes and Watervliet to see how the consolidation is working out for them so far. Bethlehem has 12 dispatchers and Clarkson said if a consolidation with the county were to occur, he hopes most of those employees would transfer over to work under the county.

“We’re not committed either way or another. We’re open to it, we’re actively looking at it, but we’re not that far along yet,” said Clarkson.

Creating a centralized, countywide dispatch center could also improve emergency efforts in the event of a large-scale event, said Rozak.

“When something happens on a larger scale you’re not trying to get in touch with 19 separate dispatch systems. … We’re the one-stop shopping where everyone goes and also improves communication efforts,” said Rozak.