A teacher’s act of charity 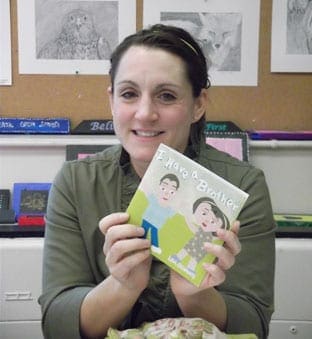 Colonie Central High School art teacher Lisa Benanto was having a hard time explaining her son Brandon’s autism to her daughter Katie, so she decided to write a book about it to help her understand.

“I constantly looked for books to use for my daughter, who was at the time 3 to 4 years old, to describe her brother’s disability,” said Benanto. “My intended audience is for small children because they just don’t have any books for them.”

Benanto wrote the book “I Have a Brother” from her daughter’s point of view, simply detailing different interactions she has had with her brother where she starts to notice he acts differently than other children. For example, she and her brother would be playing together, but Katie will notice her brother will not look at her in the eyes.

“He doesn’t look at my eyes when I say, ‘Look at my eyes. I’m talking to you,’” Benanto said, describing a scene in the book. “Or ‘Mommy said he’s like Peter Pan, it’s hard for him to grow up.’”

The book also contains questions at the end, which Benanto hopes will spark a discussion between the family and the child and help them understand autism a little more. Benanto said her household is very open about Brandon’s disorder, which is autism spectrum disorder, and it has helped her daughter have a better understanding of what it entails.

Benanto had to find time to write the book, as she had to work on it in between teaching, taking care of the kids and bringing them to the many activities they are involved in. So when she would take her kids to swimming practice, she would have a roll of paper in front of her where she would be writing out the story and drawing the pictures.

Katie and Brandon both got used to seeing her work on the book during her free time, Benanto said, and they were actually very involved in the writing process.

“I showed them the book and said, ‘This is you and this is you,’” Benanto said. “I read that to my daughter and she thinks it’s cooler now.”

All of the writing and the drawings were done by Benanto, but she said she did get some help with the layout from her nephew, who is getting his degree in graphic arts at the University at Buffalo.

Benanto went to Bokland Custom Visuals in Albany, where she said she scanned all of the pictures she was going the use for the book. She then decided to self-publish and brought the book to a local printer where she said it was printed at cost. She spent around $500 to $600.

Once the book was printed, she began handing it out to various different organizations and charities that deal with children with autism. Benanto also gave one to every principal in the South Colonie Central School District.

Kristin Scott, a kindergarten teacher at Milton South Elementary School, said she was the teacher of both Katie and Brandon and said the book does hold some personal meaning for her. She said the questions that are in the back of the book are very helpful to families trying to start a dialogue about autism and said that it is good to have something younger children can relate to.

“The philosophy is to be open with children,” Scott said about talking to children about autism. “It’s being mainstreamed into the classroom more. They need to learn they don’t have to be afraid of a person with Aspergers. They just learn differently.”

Benanto said she has already written two other books and is almost done with the second one. She wants to continue to write these types of books for children in the kindergarten and preschool ages. Her hope at this point is to find a publisher.

“I’m using a gift I have and am giving back to the community,” Benanato said. “It’s an act of charity.”