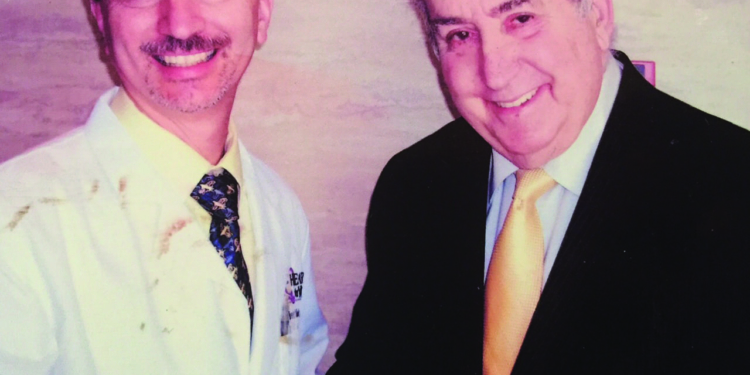 When I was in my 30s, I started my first newspaper column on senior citizens with this question: “Why is a man in his mid-thirties writing about ‘seniors,’ ‘older people,’ ‘the distinguished,’ ‘the aged,’ ‘silver foxes,’ ‘the retired?’” To answer the question succinctly, I will steal a line from Man of LaMancha: “I like them. I really like them.”

After a quarter of a century, nothing has changed … except that I have become “one of them.” I turn 60 this month, and the tables of time have turned on me!

While I began writing about seniors in my 30s, my love affair with them went back as far as I can remember.

First of all, I was born when my father was 50. By the time I had any real memories, Dad was a senior. Beyond that, I got a job as a kitchen utility worker in a nursing home when I was in high school, and I would take every opportunity to visit with the residents when I was on break.

Bessie Levy was my favorite resident. She thought I was her son. No matter; we’d chat as if I was.

Fast forwarding several years, I became immersed in the senior culture through years of working in  social services with the Senior Service Centers of Albany before transitioning into the health field as a hearing instrument specialist.

While with the senior agency, I founded what is now the Capital District Senior Spotlight, which you are reading. In that position, I began to spot stories in the seniors who would regularly come to the senior citizen centers.

Sure, they were shooting the breeze while shooting pool or playing cards or bingo. But they were doing more than killing time. They were reliving it. Some had heard their stories before, but I had not. Reading history is one thing. Listening to it by those who made it was another.

When I had first interviewed for the senior centers, I jokingly asked, “Does this mean I have to support allowing seniors to keep their driver’s licenses?” That kind of stereotype would soon be broken in me, as I became their spokesperson and advocate through writing.

One stereotype is about dating during the senior years. For example, there was the Valentine’s story I wrote about a couple that met at the senior center. Their relationship developed, and they may even have married on Valentine’s Day (I can’t remember with certainty). The idea was that love and tenderness do not dissipate with age.

At that time, perhaps readers thought it was a “cute” story. Today, I understand that companionship, especially after losing a mate in some way, is as critical as the air we breathe. These “cute, little seniors” have so much to tell when we listen with our hearts versus our eyes.

This passion for mining the nuggets of those in their golden years would not leave me alone, even after I left the senior centers. As I moved into the hearing health care field, I couldn’t escape the desire to reach for my pen and jot down the stories of patients that I’d see when we were still in the “house call” era. Sitting at their dining room table, I’d collect folklore and homespun wit and wisdom for a column I would self-syndicate called, “Retiring Retirement.” The column would dispel myths about aging by highlighting seniors doing something positive in their advanced years.

I decided that my first interview should appropriately be a writer like myself. I selected the most famous senior in the country who, coincidentally, happened to be Albany’s favorite son. I hit paydirt with an interview with Andy Rooney, the curmudgeon who claimed during my interview that he was the most widely read and most influential communicator in the English language in the world. His popular postscript on the CBS’s 60 Minutes called “A Few Minutes With Andy Rooney” may well have made that possible.

Andy didn’t want to do the interview, and in his typical cranky style came close to shooing me off the phone.

“I don’t want people to consider me old,” he objected.

“But that’s why you must do this interview,” I desperately countered. “People have got to stop pigeonholing seniors.”

It was hard to argue with a celebrity of his magnitude, but I was able to wrestle him into a provocative discussion.

But, most of my columns came from seniors I would meet in the hearing field or at the 700 senior centers and civic and religious clubs where I was the guest speaker. I still chuckle when I think of the dozens of hearing aid house calls that opened my ears to the voice of experience, because many would invariably end up as subjects in my column, rather than new patients.

In the midst of my hearing career, another notable celebrity brightened my life. But he wasn’t cantankerous in the least. Ernie Tetrault, the longest-tenured anchorman in America, called in one day for hearing aids.

“Are you THE Ernie Tetrault?” I asked.

That was the beginning of a long and satisfying relationship whereby Ernie became the face of Hear For You, a practice I owned through much of my career. We did television commercials and speaking engagements where we rode and talked for hours in the car. My wife, Vini, and I were also honored to be with him when he was inducted into the New York State Broadcasters Hall of Fame, a place he shares with the likes of Walter Cronkite and Cousin Brucie.

Throughout all of this, I was the beneficiary of an old soul who left an indelible mark on my heart. When I was in my late 20s, a recently retired scientist named Dr. Royal A. Cutler, Jr. began to share a nice slice of his senior years with me, his adopted son of sorts. The next three decades of his time and concern showed me the profundity of “refirement years.”

As a would-be student of the Bible, he literally read through most of the Old Testament with me; and I mean line by line. He peppered our time together with sagely anecdotes that seasoned our studies with practicality in the nick of time for my budding fatherhood.

I lost him to heaven in 2013, but I will never misplace his lesson of the significance of selfless servanthood and of how we can all determine to finish strong. Even in his final days of hospice, Royal raised his hands to worship songs sung at his bedside and smiled from beneath his ventilator.

After accepting an offer to sell Hear For You, I began to prepare for my own senior years. I invested a lot of my 50s into building a writing career, working with our worship teams at Bethlehem Community Church in Delmar, re-establishing a hearing practice and learning the art of grandfathering, while getting the hang of managing “Sonrise,” my artist dream-house on the Hudson River. During that same span, hundreds of songs, a novel, two screenplays and a blog that grew into a five-day-a-week devotional came out of this guy who is now one of those “seniors” I used to write about.

Now that I’ve reached “the big 60,” I want to encourage fellow current and pre-retirees who may be wondering, “What’s next?” The truth is, there is always something next. The old terminology called it “second careers.” I think we should do our best and let God do the rest — no matter the year of our birth.

I’ll take my cues from the Bible, rather than let stereotypes define my re-firement years: “Even in old age they will still produce fruit; they will remain vital and green.” Psalm 92:14 (NLT)