A pioneering family: a historical marker commemorates the LaGrange Farm 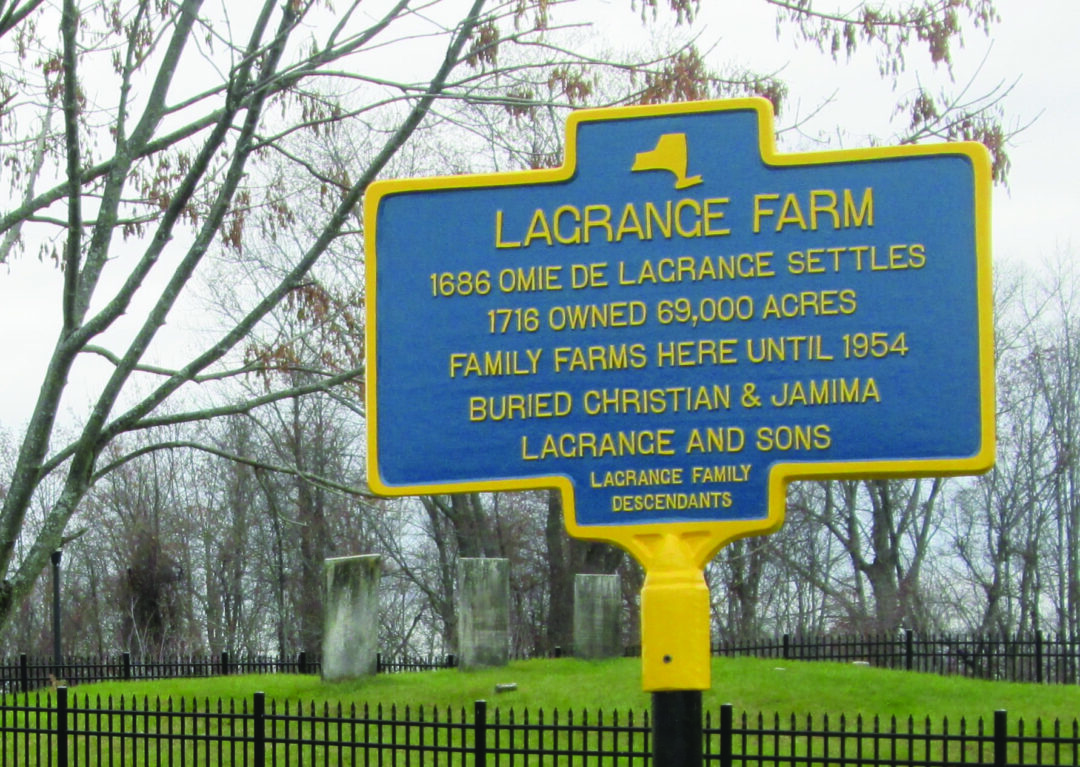 Following a period of French Huguenot persecution during the 17th century, the family of Omie de LaGrange fled their home country before opting to settle in the Capital District in 1665. Centuries later, his descendents are honoring their patriarch with a historical marker at the family farm in Slingerlands.

Garry McBride took up the project more than three years ago following the sale of the majority of the LaGrange farm property to developers. The back of the Vista Technology Campus goes through the historic LaGrange homestead and, although the farm house and a barn still stand, it is no longer owned by the family.

Before development could go forward, the state Historic Preservation office had to oversee the property. A compromise was struck since the family’s old cemetery is still on the grounds. It was left undisturbed, and is now showcased in the middle of a roundabout at the back of Vista.

McBride, 76, said he grew up on the farm in Slingerlands until the death of his father when he was 11. The homestead was no longer used as a farm, but his father was a veterinarian and the space allowed for him to care for the farm animals of neighbors.

“I had a lot of good memories there,” said McBride, who has two younger brothers and a sister also raised on the property. “My grandmother loved that farm, and I did it out of respect for her.”

Omie de LaGrange first settled in Albany, or what was then called Fort Orange. According to the “Hudson-Mohawk Genealogical and Family Memoirs” published in 1911 by Cuyler Reynolds, he purchased half of the Van Baal patent from Jan Hendrickse Vroman in 1686 for a typical price at the time–100 beaver skins and 250 pounds sterling. In 1716, the other half of the property was purchased with partner Johannes Simonse Vedder to equal  69,000 acres. LaGrange and his bother Issac then settled a piece of land by the Normanskill.

As more settlers arrived, LaGrange and Veeder leased portions of their property as farmland. This caused issue with the patroon of Rensselaerwyck Manor, with VanRensselaer filing a suit to lay claim over the property. In 1776, the court ruled in VanRensselaer’s favor, making the family tenants of property they had previously owned for decades. But portions of the property were returned following the Anti-rent Wars in the 1840s.

The land in Slingerlands remained in the LaGrange family until 1956, with Ella LaGrange McBride as the last owner.

McBride said he was having trouble getting the marker installed, so he reached out to Bethlehem Town Historian Susan Leath. She worked with McBride on the research of the property and the wording to get the marker.

“The problem is the state’s Historical Marker program is kind of defunct,” said Leath. McBride and his family had to pay to get the marker made themselves. They then needed to get permission from developers to have it installed by the town’s Highway Department.

Leath said she felt the marker was important. “As Vista continues to develop, people will be curious about the cemetery that is preserved in the middle of a roundabout. The historic marker provides some background about an important family in the area.”

Buried in the cemetery are Christian I. LaGrange (1779-1848) and his wife Jamima LaGrange, along with three other family members from that time.

Several offshoots of the LaGrange family established their own farms throughout Bethlehem, New Scotland and Guilderland throughout the generations.

New Scotland Supervisor Doug LaGrange is a descendent of Omie, with relations to James LaGrange, who established his farms in Guilderland Center.

“Frankly, I think it’s nice for one of the area’s original families to be recognized in such a way,” said LaGrange, who thanked McBride for his work on the project. “I love history and our family was pivotal to the establishment of these towns. I think the marker is a nice acknowledgment.”

McBride said the marker would not have been possible without Leath’s help.

Legal Chat: When does it become harassment?