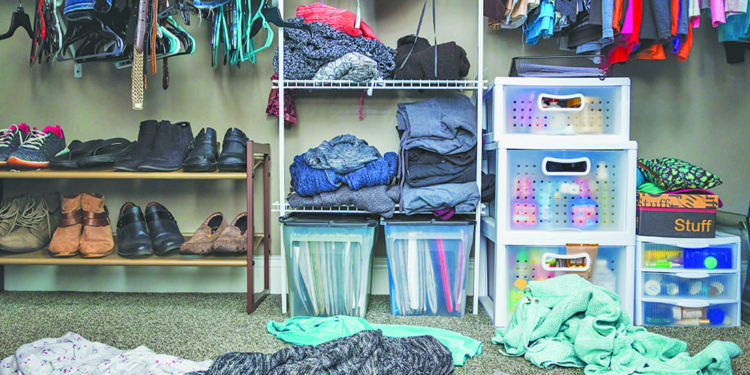 I can’t be the only one who thinks of selling stuff when I want some cash. My house is filled with So. Much. Stuff. Even the hidden spaces – the closets, the attic, the closed drawers, the entire garage – are packed full of … what? Junk? Not exactly. Some. But also usable items that are not getting used at all. Not by me. So the immediate thought is: Maybe someone else could use them. And maybe someone else would pay me money for these things. It’s garage sale season after all, and the sales continue year-round, day and night online, too.

A few months ago, seeking help and guidance to maximize my ability to collect cash, I Googled phrases like the clunky “sell my stuff for money” and the more alliterative “cash for clutter.” This quickly led me to Denise Duffield-Thomas, a money mindset mentor who has not only figured out how to maximize search engines, she’s also nailed the whole money thing. I read a post she wrote about how decluttering and money are connected and felt really inspired. Clutter was symbolic of my chaotic relationship with money? Well, then. I was ready to declutter!

Walking through my house in search of easy-to-remove-and-sell items seemed easier than digging into attics and closets. When you have kids, you automatically have clothes and toys they’re outgrowing by the second, so a neat pile of sellable items soon accumulated. Then, my gaze landed on a CD player I’d owned since 1998. There it sat in the room where I ate dinner each night with my family. It had followed me through two apartments of my own, the first house I bought with my husband, and the house where we live now with our two sons.

I hadn’t planned on digging deep. But here was a symbol, prominently displayed in my home, of one of the worst days of my life. That CD player was the last gift I gave to my ex (and almost immediately took back). It was a reminder of a particularly gruesome argument preceded by a decade-long emotionally abusive relationship.

Why was I hanging onto this object? It wasn’t as if I’d never asked myself before. Sure, it still worked and cost a lot when I bought it (a laughably low amount of money by today’s standards). But now, 20 years later, I was finally able to say those weren’t good enough reasons to keep it.

I tracked the money I earned in that early decluttering effort. I made $159 in about two weeks—nothing to sneeze at, as they say—selling toys, kids’ clothes, and a couple of furniture items online. As for the CD player? I didn’t bother trying to sell it. (Does anyone even play CDs anymore?) I did finally get rid of it, though, donating it just in case someone can use it.

The thing works fine. And without it, I was left with no way to play my CDs. (Oh, right… I did used to actually listen to them when I had a player.) I may have to invest in a new one. But as it turns out, sometimes a 20-year-old CD player you could continue using for free just costs too much to keep.