Jocelyn and Chris Arndt are set to drop their latest album 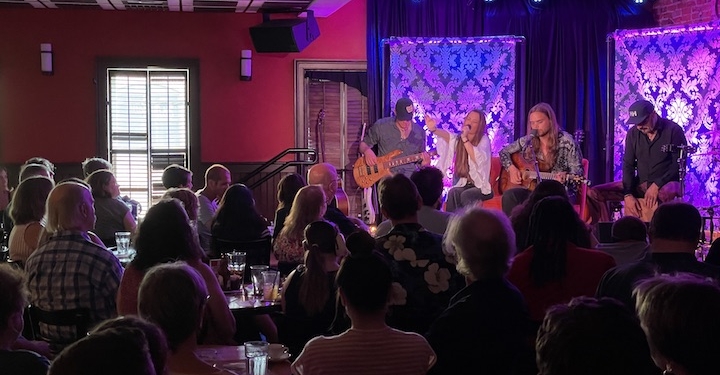 SARATOGA SPRINGS — The night’s fan-fueled setlist forced Jocelyn Arndt to reflect upon a musical career that started in high school.

“Such a crazy experience,” Jocelyn said from the stage. Nearly all of the songs from “Strangers in Fairyland” were to be played in the 90-minute set. Some of the songs, they hadn’t played since they both left home to attend Harvard University, from which they’ve since graduated. “I get to revisit my teenaged brain and to think of who I was then and where I am now. It’s a crazy experience.”

She and her brother Chris, have matured into adulthood in the eyes of a fanbase that has followed the sibling rock duo from teenagers to Billboard chart-breaking artists. The Fort Plain natives came back to Caffé Lena on Saturday night to perform two, distinct sets; the first of which comprised a playlist of requests from fans both in the room and watching the stream online.

The nostalgic vibe was juxtaposed against the aesthetics on stage, the centerpiece of which was the ubiquitous sofa the two have brought to live shows since the pandemic outbreak. While venue doors closed and they couldn’t play to live audiences, the siblings took to weekly Facebook Live performances on the sofa.

The evening started with a volley between the old and the news. Music led off with their 2018 hit “Outta My Head” before bouncing to “Make a Move” off of 2017’s “Go” to one of their latest tracks “Skeleton Key.”

“Skeleton Key” skews the perception of time. Jocelyn and Chris released the song as a single just before Halloween last October. It will appear on their upcoming album “Favorite Ghosts” when it’s released on June 17. A handful of fans who attended the recording of “One Night in November” may recall hearing it while at the studio in 2019 — it was not included on the live CD.

“This is the therapy portion of the show,” Jocelyn quipped leading into “Nevermind.” Another reach into the proverbial backseat as she recalled where she was while writing some of the songs. A mention of junior prom and teenaged relationship. “This one’s for you Dad,” she said with a chuckle. “I promise I’m fine.”

Some of the band’s most devout fans identify themselves as “Arndtvarks.” They packed the intimate Saratoga coffeehouse, undoubtedly the suspect who challenged the band to play what Chris called “very deep cuts.” The band treated their fan base to “Esmé’s Secret Recipe,” a singalong they recently wrote with an 11-year-old Troy girl named Esmé Savoie.

Savoie was born with intractable epilepsy and a genetic gene mutation that impact her ability to speak, walk and eat. The band met her as part of the Make-A-Wish foundation and helped open an exhibit at The Arts Center of the Capital Region in Troy. A young author, she writes uses eye gaze technology. Her short stories start by recounting her adventures on a surfboard or dogsledding, but they then take spectacular turns.

“Better know the recipe,” the playful hook goes at the end, “or the snack becomes you.”

Going into “Icebreaker,” Chris recalled playing the song just before meeting their manager, David Bourgeois, and his wife Anna. “We were playing in the beer tent at the Fonda Fair,” he said. “There were four people in the crowd: our parents, David and Anna.”

A conversation followed, convincing the teenagers that they could make a career out of playing music. Ten years later, with their eighth album sitting on the merch table, David later stands in the hallway as attendees buy the new album before the release date. It’s been playing on a constant loop from his stereo. He said he plays it for the enjoyment and not with the discerning ear one would expect. His Bridge Road Entertainment music development company has managed the band since 2013. He’s been their drummer for just as long.

Each of their previous albums was recorded at his White Lake Music & Post Studios in Albany, but vocals this time were captured at Clubhouse Studios. “There’s a reason you get more done at the gym than working out at home,” he said. “They’re more distractions at home.”

He described it as a quick jaunt downstate. They collaborated with Grammy Award-winning producer Joel Moss and Byron Issacs of The Lumineers. They tackled the vocals in one day and returned home. He said the move also helped him learn to walk away from a process he otherwise found himself obsessing over. He’s a fan of the results.

“I honestly believe this is our best work,” he said.

Jocelyn and Chris are in line to play in several music festivals this summer, including the New York State Blues Festival on Saturday, June 18; Summerfest 2022 in Milwaukee on Saturday, July 1; and Bourbon & Beyond in Flournoy, Kentucky on Friday, Sept. 16.

The band will return to Saratoga Springs to play a special VIP show at Putnam Place on Saturday, Aug. 13.

Guilderland Public Library news: The votes are in for library trustees