GUILDERLAND — It’s a lovely toy story that continues to bring joy to children in need around the Capital District.

Anyone can donate new toys, games, books, wrapping paper, bows, ribbons and tape. The TA Unit has around 120 members and the toy drive is also run by volunteers. 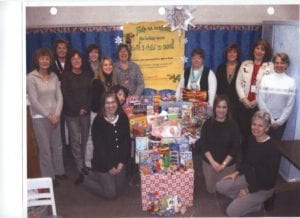 Christine Govin, the unit’s president for two years now, said the donations will first be delivered to Georgianna Pennacchia, president of the Schenectady-based St. Madeleine Sophie Food Pantry, on Dec. 6.

Govin said the donations will then be distributed to kids, all aged 12 and under, awaiting foster care at St. Catherine’s Center in Albany for a party with them.

“We want to do something for our community and those kids don’t have a home for the holidays so this drive really benefits them,” Govin said. “Also, whatever toys that were not donated to the party will get taken to other local families.”

In an email to Spotlight News, Govin wrote that such remaining toys would be given to children from around 150 local families who are in need.

When asked if the annual toy drive has ever seen too few or too many toys being donated, she said, “I don’t have an exact record in front of me about how much has been donated overall but I don’t think there can be too many toys.”

Before becoming the unit’s president, Govin said she had been its vice-president two years prior and has been a teaching assistant for eight years now.

LETTER to the EDITOR: The TDEs have conflicts in Colonie