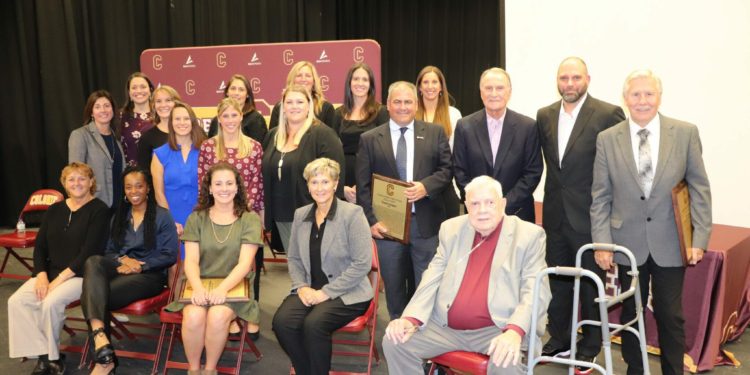 COLONIE — An induction ceremony was held in the Sand Creek Middle School Auditorium earlier this month to induct nine into the Colonie High Athletic Hall of Fame.

“The idea behind the Athletic Hall of fame is to honor past athletes and their accomplishments,” said Roemer. “Each of the individuals or groups who have received this honor has been recognized for achievements that foster pride, display good sportsmanship, and support citizenship in our schools and throughout the community. All of these are characteristics that set the example for current and future Colonie athletes.”

Bonitatibus began at South Colonie Central Schools in 1990 teaching physical education. She coached a variety of sports throughout 32 years. While compiling a 268-82 record — a 77 percent winning percentage — Bonitatibus guided Colonie to four Section II championships; three regional titles; and posted 20 or more victories in a single season eight times. The 2000 and 2001 teams established a legacy of dominance, going 51-2 overall, and winning consecutive Section II crowns. The 2001 team punctuated the run by capturing the New York State Championship, and the state Federation Championship for Large Schools. Throughout the years, she received Coach of the Year honors from the New York Sports Writers Association, BCANY, Troy Record, Times Union, Schenectady Gazette, Channel 13, and the Suburban Council. Until this year, she served as NYSPHSAA Girls Basketball State Championships tournament director. She was also the chairperson for the Suburban Council girls basketball coaches, and currently serves as chairperson for the Section II Scholar Athlete committee.

Chambers was a multi-sport athlete and a key component to the varsity baseball team. During his time, the Raiders had a 49-18 record. In Chambers’ senior year, he was selected First Team All State, First Team All Area and First Team Suburban Council, while finishing ranked as one of the top 100 pitchers by Collegiate Baseball Magazine. He still owns the school single-season strikeout record (93) as well as career strikeout record (240.) Chambers received his BA in communications while attending Marist College on a full scholarship. Following his junior year, he declined a 13th round draft pick by the Chicago White Sox and returned to Marist. After graduating, he played a half season of independent baseball but a recurring injury led Chambers to retire in 2007.

DiLello (Brannigan) was a three sport athlete — soccer, lacrosse, and track. She was a U.S. Lacrosse All Academic American recipient her senior year. DiLello attended UAlbany and rostered on the Women’s Lacrosse team her freshman year and then transferred to Marist College. She currently coaches at the varsity level and contributes back to Girls Youth Lacrosse, clinics, and camps. Additionally, DiLello currently serves as a special education teacher in the district. During her high school lacrosse career, DiLello was named a 2011 U.S. Lacrosse All Academic American. She was a four-year letter winner in lacrosse, tallied 41 goals and 21 assists her senior year at Colonie, and totaled a career 140 goals and 61 assists. She was named first-team All-Star by Times Union and Troy Record. DiLello lettered twice in both soccer and track and field and was named All-American in the 4×1 at Nationals in Spring of 2011.

Gebauer played on the varsity golf from 1985-88 and varsity bowling from 1987-88. He was a captain of the 1988 Golf team, which won the Section II championship in 1986-87 and he posted the lowest round at the Section II Class A Championships in 1987-88. In college he was an NJCAA All-Region individual selection in bowling and a JUCO Academic All-American while at Hudson Valley Community College. As a professional player Gebauer won the 1993 NENYPGA Assistants Professional Classic, the 1995 NENYPGA Buick Classic, and the 2009 NENYPGA Spring Pro-Pro Championship. Professionally, Gebauer was the 2003 NENYPGA Teacher of the Year, was named in Golf Magazine’s list of Best Golf Teachers in America in 2005. Gebauer has also been awarded the NENYPGA Horton Smith Award (contributions to PGA education) and in 2009 was named PGA’s highest honor NENYPGA Golf Professional of the Year.

Green earned 11 varsity letters in Cross Country, Indoor and Outdoor Track. Among his accomplishments were: three Suburban Council two-mile championships and school record holder in outdoor track, two Tri-County two-mile championships in indoor track, two Suburban Council and two Section II championships in cross country (also a second place in each while leading Colonie to first place team finishes 3 years), seventh and fifth in state championships (while leading Colonie to second place team finish), and several invitational meet wins. Green was virtually undefeated in dual meet competition in the two-mile and cross country from his sophomore year through his senior year and received the Colonie “Cleary Award” twice, for his dedication and leadership as voted by players and coaches. Green attended SUNY Cobleskill and then the University of Mississippi He held school records in the half-mile, one-mile, two-mile, three-mile and four-mile relay. He earned All American honors twice and was co-captain of Cobleskill’s 1968 JCAA National Championship Cross Country team. Green led Ole Miss to a team championship in 1969 in the Mississippi Intercollegiate State Championship while finishing first individually.

In the 1957 state championships, Gregg set state records in the 100-yard dash (9.8) and the 220-yard dash (21.0). He attended University of Michigan on scholarship where he improved 100-yard time to 9.5 in an era when the world record was 9.3. A high point was a photo finish at Big Ten Championship 60-yard dash in time of 6.1, tying the  record held by Jesse Owens. Parallel with athletic pursuits, Gregg achieved five degrees while at the University of Michigan including doctorates in dentistry and Medicine-Neurosciences. He completed specialty surgery residency at Michigan, and has conducted academic and private practices in oral and maxillofacial Surgery for 45 years.

Sheehan is a 1957 graduate of Burnt Hills High School where he lettered in football, basketball and baseball. He received his bachelor’s degree in Education from SUNY Oneonta in 1961, where he played on the men’s basketball team. He then began his 34-year teaching career in South Colonie. Kicking off his coaching days in 1967, Sheehan helped create the eighth grade football program to develop players’ skills early and to strengthen the Colonie program. Described as being like a “utility player” in baseball, Sheehan was willing to take on any coaching role and went where he was needed to support Colonie athletics. Sheehan served as assistant coach to Colonie Hall of Fame basketball coach Pep Sand, coached numerous undefeated freshman and JV football teams, and led his teams to many winning seasons at the varsity level. He coached lacrosse for a couple years to ensure Colonie had a program. As a Town of Colonie elected official, Sheehan championed the creation of new parks, athletic facilities, and programs to support Colonie youth sports.

Letter to the Editor: Vote ‘NO’ to Prop 2

Simple tips to improve your status with mortgage lenders