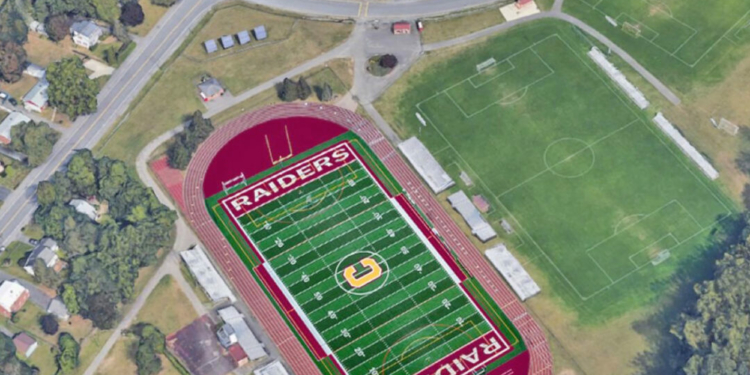 A rendering of what the football field could look like with synthetic turf. South Colonie School District

The vote for proposition No. 1, which will bond $112.5 million passed 1,151 to 408, or 74 percent of the vote. Proposition No. 2, which would spend another $7.5 million as part of an Energy Performance Contract to improve energy efficiencies in all buildings while the other construction is going on, passed 1,234 to 323.

“We are grateful for the community’s support of this capital project,” said Superintendent David Perry. “This investment into our facilities will not only improve the educational experience for our students and faculty but will propel the district forward for our next generation of learners.”

There is no direct impact to the taxpayers from the EPC component because it is based on the savings generated by improving energy efficiency.

The district will now conduct more design work with construction slated to begin in 2024 and continue until 2028.

“The Board of Education would like to thank all our residents who turned out in support of this capital improvement plan,” said President Brian Casey. “Thank you to our district leadership and staff for their efforts in building this strategic capital spending plan. And, thank you to our district facilities committee and community members who worked collaboratively on the plan to provide necessary improvements to support our students now and into the next generation.”

The largest chunk of the capital fund, $32.6 million, is proposed to renovate a new operations and maintenance/bus garage facility at the former BOCES on Watervliet Shaker Road and build an addition at the district office. In May, voters approved spending up to $1.9 million to purchase the former BOCES site.

Colonie High School will see some $18.7 million worth of work including a new turf athletic field and renovations at 30 classrooms, the auditorium, the locker rooms and restrooms. Colonie is one of the few schools in the Suburban Council that does not have a turf field and Perry said Raider athletic teams often rent turf fields from other districts when upstate weather prevents athletes from using grass fields. He also said the new turf will be used by physical education classes, and grass fields require ongoing maintenance where a turf field will not once it is installed.

The two middle schools, Sand Creek and Lisha Kill, will see $7 million and $6.8 million worth of work, respectively. At Lisha Kill, there will be a new drop off lane constructed and the outdoor athletic courts will be resurfaced. At both schools, the auditoriums, locker rooms, classrooms and restrooms will see work.

The estimated proposed work at the elementary schools, according to the district, are:

There will be some $500,000 spent on restrooms and all buildings will see renovations to classrooms, security upgrades including cameras and card access points and technology infrastructure upgrades.

There is $7.5 million worth of work proposed to make district buildings more energy efficient planned along with the $112.5 million worth of construction work paid for out of the capital fund. The EPC component does not need to go to a referendum, but the state allows the district to borrow 10 percent more by taking it to the voters first.

There is no impact to tax payers like the capital fund because the district is borrowing against anticipated savings in energy costs by making the upgrades, Perry said previously. Essentially, it will allow the district to perform an additional $7.5 million worth of work at no direct cost to taxpayers. The EPC component, which will include high efficiency lights and doors and windows, is separate and distinct but will take place in conjunction with the other upgrades.

“For example, a classroom will be renovated with money from the capital fund, which is attributed to the taxpayers, EPC is work that can be done that is offset by cost saving and working with an energy performance company,” Perry said during an earlier interview. “By doing it at the same time we are making sure we are not doing things twice. If you renovate a classroom, and two years later you are changing out light fixtures it is not a good use of money.”

BOCES and buses and district offices

Under the $112.5 million capital project, the district will spend some $26 million to demolish three of the existing BOCES buildings to make way for a parking lot to accommodate 72 full size school buses and a fueling area. The two remaining buildings at the BOCES complex will be renovated as a new bus garage and operations and maintenance facility.

The current bus garage, located near the Village of Colonie office complex off Central Avenue, was built in 1940 and the latest upgrade, a new bus barn, was built in 1998, Perry said.

Currently, operations and maintenance are spread out across the district.

The plan is to use some $2 million in capital reserves to build an addition to the district office, which was built in 1971 with the plan on expanding or moving within 20 years, on Loralee Drive with the rest coming from the capital fund.

The work will include a new mechanical system, more office space and a larger community/board room.