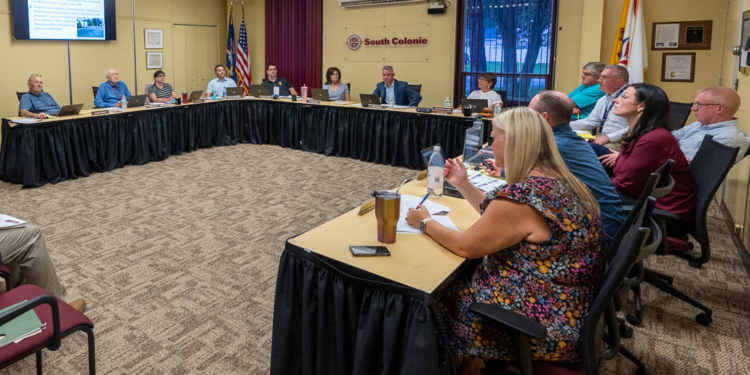 The South Colonie Board of Education (Jim Franco/Spotlight News)

COLONIE — The South Colonie Central School District Board of Education forwarded a $120.4 million renovation project to voters for consideration at its last meeting.

The Oct. 18 referendum is broken into two parts. The largest, called Next Generation, is a $112.5 million bond to fund sweeping renovations to district buildings and facilities. The second is a $7.9 million Energy Performance Contract to improve the efficiency of buildings across the district.

There is no direct impact to the taxpayers from the EPC component because it is based on the savings generated by improving energy efficiency.

By unanimous vote, the BOE approved sending both facets to a public referendum slated for Oct. 18. There is a public hearing slated for Oct. 3 at the district offices near Saddlewood Elementary School at the end of Loralee Drive.

The district has produced two videos outlining infrastructure issues the bond will address and is planning to send an eight-page flyer to parents to explain the scope of work and the impact to taxes.

“This is a game changer for South Colonie,” said Superintendent David Perry.  “It will help to revamp and revitalize our classrooms, and while our spaces are functional and well maintained, as with anything, time brings it to a point where you need to replace items.”

The largest chunk of the capital fund, $32.6 million, is proposed to renovate a new operations and maintenance/bus garage facility at the former BOCES on Watervliet Shaker Road and build an addition at the district office. In May, voters approved spending up to $1.9 million to purchase the former BOCES site.

If approved, Colonie High School will see some $18.7 million worth of work including a new turf athletic field and renovations at 30 classrooms, the auditorium, the locker rooms and restrooms. Colonie is one of the few schools in the Suburban Council that does not have a turf field and Perry said Raider athletic teams often rent turf fields from other districts when upstate weather prevents athletes from using grass fields. He also said the new turf will be used by physical education classes, and grass fields require ongoing maintenance where a turf field will not once it is installed.

“It is not surprising to see turf fields becoming the norm in many of the school in upstate New York with the weather we have and the requirements for athletes to have a safe surface,” Perry said. “It provides our athletes with a safe facility and many of our teams are already spending money using turf facilities at other schools so this is a way to enhance our facilities and modernize the area improve the overall morale.”

The two middle schools, Sand Creek and Lisha Kill, will see $7 million and $6.8 million worth of work, respectively. At Lisha Kill, there will be a new drop off lane constructed and the outdoor athletic courts will be resurfaced. At both schools, the auditoriums, locker rooms, classrooms and restrooms will see work.

The estimated proposed work at the elementary schools, according to the district, are:

There will be some $500,000 spent on restrooms and all buildings will see renovations to classrooms, security upgrades including cameras and card access points and technology infrastructure upgrades.

The district is aging, Perry said. The high school was the first building constructed in 1952 and the most recent school building, Roessleville Elementary, was built in 1972. There has been smaller bonds and projects in the past, but district officials say they were more routine in nature.

“We have had a lot of small projects over the years but we have not done a number of things over that time so we are hoping to get caught up and move the district forward for the next generation of Colonie students,” said Jacqlene McAllister, assistant superintendent for management services and strategic planning. “We feel that for the amount of work we are looking at is a fairly reasonable ask to the community. We have not asked for a tax increase for a project for a long time.”

The last time the district asked taxpayers to fund a capital improvement project was in 2016 and the $30 million worth of work is finishing up this year. It included a new bus loop at the high school, upgrades to technology rooms at Sand Creek, roof work at the high school and a new library at Roessleville Elementary.

“The fact of the matter is if we tried to do everything we need we would be looking at a $250 to $300 million project. Not only is the tax impact not digestible, but we couldn’t do that amount of work in a five year time period.” Perry told the board. “If this project is approved there will be other projects earmarked down the road. We need to continue making progress over the next 5, 10, 15 years. We have been able to maintain budget neutral projects like keeping roofs and boilers operational, the non-sexy things, but our classrooms need upgrades our facilities need upgrades.”

There is $7.5 million worth of work proposed to make district buildings more energy efficient planned along with the $112.5 million worth of construction work paid for out of the capital fund. The EPC component does not need to go to a referendum, but the state will allow the district to borrow 10 percent more by taking it to the voters first.

There is no impact to tax payers like the capital fund because the district is borrowing against anticipated savings in energy costs by making the upgrades, Perry said. Essentially, it will allow the district to perform an additional $7.5 million worth of work at no cost to taxpayers. The EPC component, which will include high efficiency lights and doors and windows, is separate and distinct but will take place in conjunction with the other upgrades.

“For example, a classroom will be renovated with money from the capital fund, which is attributed to the taxpayers, EPC is work that can be done that is offset by cost saving and working with an energy performance company,” Perry said. “By doing it at the same time we are making sure we are not doing things twice. If you renovate a classroom, and two years later you are changing out light fixtures it is not a good use of money.”

BOCES and buses and district offices

Under the $112.5 million capital project, the district will spend some $26 million to demolish three of the existing BOCES buildings to make way for a parking lot to accommodate 72 full size school buses and a fueling area. The two remaining buildings at the BOCES complex will be renovated as a new bus garage and operations and maintenance facility.

The current bus garage, located near the Village of Colonie office complex off Central Avenue, was built in 1940 and the latest upgrade, a new bus barn, was built in 1998, Perry said.

“It is time for a more modern, upgraded facility that is functional for staff and needed to maintain a safe fleet which provides transportation for our 5,000 students.” Perry said. “To renovate the existing buildings is not cost efficient.”

Currently, operations and maintenance are spread out across the district.

The plan is to use some $2 million in capital reserves to build an addition to the district office, which was built in 1971 with the plan on expanding or moving within 20 years, on Loralee Drive with the rest coming from the capital fund.

The work will include a new mechanical system, more office space and a larger community/board room.

As it did for the 2016 project that is finishing up this year, the district is working with SEI Design Group out of Colonie to design the project and the construction manager is Schoolhouse Construction out of Delhi.

If approved by voters in October, work will start in the spring of 2024 and finish up by the end of 2028. Phase I will include work on the buildings’ roofs, the turf field and most of the academic classrooms slated for renovation. Phase II will be the rest of the classrooms and other mechanical work on school buildings. Phase III will include the transportation and operations and management facilities and work at the district offices.

“We are planning on doing quite a bit of work, should the voters approve, for about a third of the overall cost,” Perry said referring to the state aid ratio. “We have this phased out over multiple years because we can’t do it all in one summer but we want to try to prioritize the items that will have the largest impact on our students first and then work on items that are good for our district like our transportation center that will be towards the tail end of the project.”

He said anyone with any questions prior to the Oct. 3 public hearing or the Oct. 18 public vote to reach out to the district at [email protected]

“We want our students and staff to have pride when they walk into our facilities,” he said. “If you have walked our buildings, or spent time in many of the classrooms you will see they have not been addressed since the 1970s. It is time to put the investment back into those programs and I think our kids and our teachers deserve that. We are hopeful the community will support it. I think they will. We have done our homework in seeking feedback from them and it is a common theme is that they want us to see us upgrade our academic and athletic facilities.”

The public hearing is on Oct. 3 at 7 p.m. at the Saddlewood Elementary School and the vote is on Oct. 18 from 11 a.m. to 9 p.m. at each of the district’s five elementary schools.