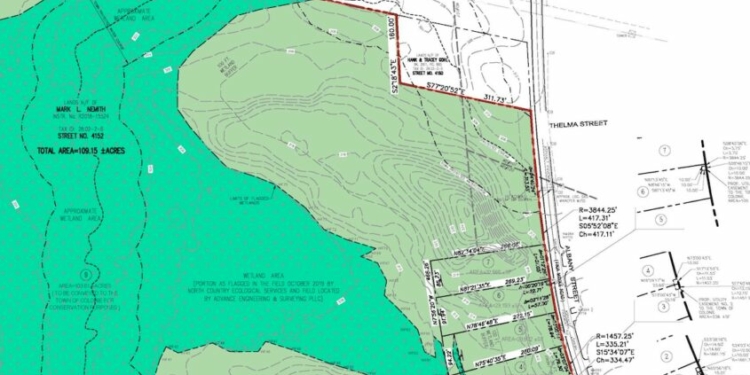 COLONIE — Neighbors living along Albany Street are not happy with a plan to build eight new homes in a conservation subdivision.

Tom Deschamps, who lives at 4150 Albany St. said some of his concerns had been answered, such as building the home more in line with his and his neighbors, but would still like to see an environmental study done on what was a dumping ground in the woods behind his home and a traffic study for the busy Albany Street.

“Behind my house there used to be a junkyard. There are rusted out 55-gallon barrels back there and they say ‘poison’ on them. It’s pretty bad back there,” he told the Planning Board during a public hearing at its last meeting. “I’ve heard numerous comments about an environmental study but we have not seen one.”

That lot would front Albany Street and in a T-shape extend behind three different homes on. It would also include a 100-foot buffer between the back yard and federally protected wetlands.

Another issue, he said, is there is possibly a Standford Family graveyard on the hills behind his home and asked if there has been an archeological study done of the area and said the size of the lots are not comparable to the lots sizes that are already there. A conservation overlay district does allow for smaller lot sizes.

Sean Maguire, the head of the town Planning and Economic Development Department, said an archeological cultural resources report will need to be completed and submitted before construction can begin.

Brad Grant, the Town Designated Engineer on the project, said there has been a rudimental  environmental assessment study but it did not include what was potentially dumped there and that generally with a project this small, a traffic study is not done.

Kenneth Mackey, who lives at 4154 Albany St., the other side of the lot in question, said owns the land between his house and Deschamps’.

“I feel I own the land due to adverse possession and I am prepared to litigate the matter if a an acceptable resolution is not reached regarding stuffing a house right next to me,” he said.

The plan was presented by Nick Costa, of Advanced Engineering, on behalf of Allied Associates, a limited liability company in Schenectady. The frontage along Albany Street would be shy of the required 80-foot required under a conventional subdivision but the lot sizes would be larger than the required 18,000 square feet. Overall density would be about .07 per acre, slightly more required two lots per acre.

“That is typically our procedure,” Maguire said. “whether we dedicate the land directly or we do an operation and use agreement where the town continues to hold title to it and the Pine Bush has rights to use and manage the property.”

Deschamps said he has found arrows stuck in his fence and on his property and if the Pine Bush is going to manage the property behind his home he hopes it would do something about irresponsible hunters.

The public hearing was adjourned pending the results of that environmental study and any pending remedial recommendations and until the town historian weighs in on the potential of a family cemetery located on the site.