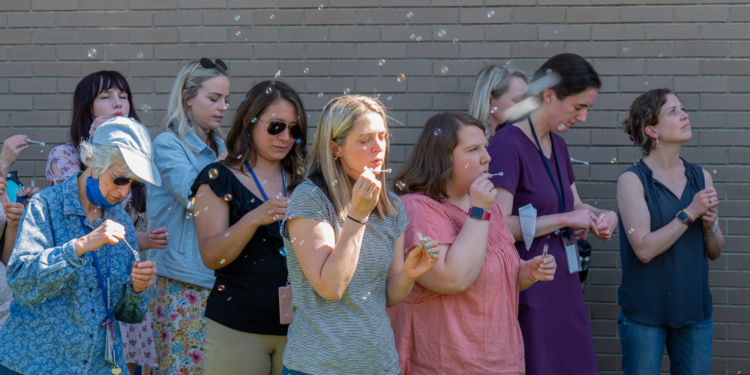 Bubbles are blown during a Vigil of Hope held at Shaker High School for teacher Meghan Marohn, who has been missing since March 27. Jim Franco / Spotlight News

LATHAM — The hardest part, said Peter Naple, is not knowing. Not knowing if his sister, Meghan Marohn, is alive or dead. Not knowing whether to grieve her loss or hope for her safe return. Right now, he is doing both.

“I know there is the wedge that family and friends and people who care about her find themselves in these days, somewhere between grief and hope,” he said during a vigil on Friday, May 13 at Shaker High School where Meghan Marohn is a teacher. “And the uncertainties and the investigations and the unanswered questions and the pain that comes with Meghan not being here. But we are not here to necessarily dwell on Meghan, Ms. Marohn, not being with us. We are here to acknowledge that pain, and bring together the idea of hope for all of us.

“The hope of Meghan Marohn. Her creativity, her beauty, her wisdom, her intelligence and her smile. And the hope for Meghan Marohn so that she will be here with us someday.”

Coined a “Vigil of Hope,” Marohn’s students, colleagues and family gathered in a courtyard at Shaker High to talk about the English teacher, Ms. Marohn, and the friend, sister and daughter, Meghan, who has not been seen since March 27. An avid hiker, the 42-year-old who lives in Bethlehem, went to Massachusetts for a week, and her vehicle was found near trails at the Longcope Park. Authorities searched the area near Stockbridge and Lee, Massachusetts, for days and found no trace.

In addition to her time in the classroom, Marohn founded the Troy Poem Project, and was known to set up a table at the Troy Farmers Market and write poetry on demand on a manual typewriter. Speakers at the vigil spoke of her love of poetry, her environmental and social justice activism and the impact she had on her students.

“Meghan is a poet, the advocate of justice, the voice and the giver of voice to joy and heartache. A visionary and a maker of meaning,” said Superintendent Joseph Corr. “I think of Meghan at the Troy Farmers Market and and her work at the Troy Poem Project, sitting with a manual typewriter by the river creating poetry on demand for those who request it. When asked why she did it, she replied ‘I think maybe I was desiring a creative outlet and wanted to connect to people in a different way. I am a mediocre to not so great small talker and I wanted to connect with people on the things I am thinking about.’

“At this vigil for you, Meghan, Ms. Marohn, we honor and celebrate that you are a light of hope in our lives. We want you to know you are cherished loved, valued and affirmed. You are our kind and gentle soul, our poet, our advocate, our meaning maker and our teacher. We hope and pray you are age and you return to your family, your community and your students.”

A longtime friend and colleague who taught with Marohn in Chatham, Shannon Faulkner, said one of her favorite things was visiting Marohn’s classroom.

“It had the look of a museum, but unlike a museum it was full of activity. Students were writing together or sharing their writing through the Ink Blot Writing Club she ran and others were discussing metaphysics and the problem of evil as part of her Philosophy Club and some were just dancing, actually dancing, or singing or playing music or sharing videos and there she always was, in the middle of it all, usually knee to knee with a student or two totally immersed in the conference she was having with them about their work they were sharing with her,” she said. “Her work in the classroom has always been about the power that language holds. That reading together, writing together and speaking together holds. Not for ‘As’ or other scholastic accolades or awards or honor roles or college acceptances but for the real prize, the best and only prize that matters which I the community and connection that learning together enables.”

She said Marohn to a particular interest in the students that didn’t quite fit in.

“They found a home in school, where they unearthed their talents and made friends and laughed and felt a part of things. Many were teenagers who didn’t quite fit into the strict parameters of appearance or values or activity or other superficial mandates that high school can sometimes impose, and Ms. Mahron kept an eye on these kids, the vulnerable ones and she showed them by example of how to live out the fullness of who they are with as much joy as honesty,” she said. Her willingness to be vulnerable herself always made other feel safe.”

One of her students, Kamillia Barrett, said on behalf of another student, Elizabeth Scheu, she was lucky to have Marohn as a teacher and because of her she had set her sights on becoming a writer, and recalled the teacher always saying “hi” in the hallways and sharing good pieces of poetry with her.

“She embodies poetry with her entire being and she encouraged me to write more than I have ever done before,” she said. “The value of a good teacher cannot be overstated or go unrecognized. She told me people in our lives we either grow from or grow with and Ms. Marohn is someone I grew with. I can’t emphasize enough how special Ms. Marohn made every day at Shaker High. The past few months have been moving in slow motion without the blur of her red hair in the halls.”

Corr said one of the most important points made during the vigil — where Marohn was referred to in the present tense throughout — is that life if often a paradox, “it is not an either or it is a this and that.”

“I think Ms. Marohn was instrumental in getting her students to think deeply and importantly about serious matters serious issues but she did it in a way that was so safe and loving and accepting of them. She did the best in teaching, which is to bring students along to make them think of what they can be and what they can become and what their impact can be on the world,” he said. “There is this mixture of hope and loss. We are used to having Ms. Marohn in the hallways of Shaker High every day and to not have her there leaves a hole. At the same time too, she would appreciate this, there is the paradox of hope. It is our hope she returns safe and has that wonderful impact she has had on all our lives.”

Naple, his frustration evident, has offered a $50,000 reward and is planning to hire a private investigator to assist authorities in finding out what happened

He said he has been to Lee countless times to assist in the search but there are no answers. Her car was found in Stockbridge, near a Church Street trailhead, but within a short amount of time shifted the focus to Lee, Massachusetts.

“The thing is there are not a lot of answers for us right now. We know where her car was found and we know a couple data points from her cell phone but besides that there is nothing else out there,” he said. “I can tell you the Berkshire Mountain Search and Rescue, the State Police and Lee Police have searched that area extensively.”

He said his sister was a fan of the Berkshires, and has visited Williamstown and Pittsfield but he does not believe she was familiar with Longcope Park.

“It doesn’t come up with any searches in the area if looking for a hiking trail,” he said. “For her to end up there, we don’t know why. My personal belief is the person who gave her the Church Street trailhead didn’t know about the Church Street three miles away.”

The Church Street in Stockbridge, he said, is near the Stockbridge Cemetery where Norman Rockwell and other artists and authors are buried. That, he said, is a destination that makes more sense than Longcope Park.

Still, there is no logical explanation for there being no trace of her whereabouts. He said he would like the investigation to begin exploring different avenues while acknowledging the fact the search effort as included a 100 percent effort.

“I’d like to see a deeper investigation into what happened prior. Why Longcope Park and why so few data points from her cell phone once she gets to Longcope Park for the rest of the day? There are three data points after 10 a.m. but outside of a and couple cell tower pings there is nothing on her phone which is somewhat of an anomaly. I’ve been out here and I’ve seen what my phone does in that area, and the data points I get, and we are both Verizon customers. The lack of data points is what I question and that is what I would like them to delve into. Why only three data points?

You can see her data points, there are plenty and you can see a couple at the corner of Church Street and Lee and Stockbridge Road and besides that we have three ambiguous spots in the private property across from Longcope that extend eight house and nothing else besides her phone being shut off at 8 a.m. Monday morning.”

Meanwhile, he said there is another meeting with authorities set for Wednesday, May 18. The search has not been called off, and it is still considered a missing persons investigation.

“The last seven weeks have been trying and we have received a ton of support to see it physically is extremely uplifting and it does give you hope moving forward,” he said. “The uncertainty, and the space we have been in for the last seven weeks where we don’t know whether to grieve, or we have hope. Is there hope, is there grief? What is there. We have to just continue to have hope we are going to find her and move on from there.”