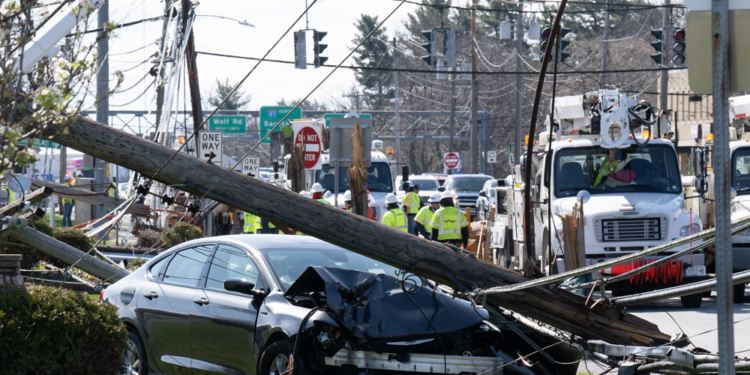 COLONIE — A one-car accident on Central Avenue caused at least four telephone poles to snap and knocked out power to hundreds.

Reports indicate the call came in at about 4 a.m. Thursday. The car, a Chrysler 200s sedan, hit the pole in front of the Smokey Bones restaurant located just east of Parkwood Drive at 1557 Central Ave.

Once that pole snapped, the weight of the wires and other electrical infrastructure combined with the poor condition of the other poles caused at least three others to snap also, according to workers at the scene.

A large contingent of National Grid workers were at the scene and seven poles in total will have to be replaced, said Patrick Stella, a spokesman for National Grid.

Power was knocked out to about 300 homeowners and businesses along Central Avenue and the surrounding neighborhoods. By noon, that number was down to about 10, Stella said, and crews wewre expected to be work into the night on Friday.

Crews at the scene said the driver was not injured, but it remains unclear what caused the accident or if any charges were filed.

As of about 10 a.m. Thursday, there was one westbound lane open and both eastbound lanes.