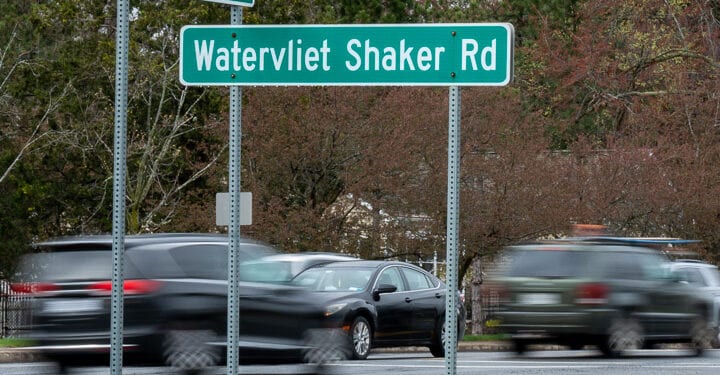 COLONIE — The stretch of Watervliet Shaker Road from Sand Creek to New Karner roads will look different in a couple years, but whether there will be new lanes and other amenities or roundabouts is not yet certain.

Albany County, which owns the road, and the MJ Engineering firm it hired for the project,  introduced four different proposals to the community Wednesday, April 14, during a virtual workshop.

The first would basically entail paving the existing roadway. The second, being called Alternative 1A, would include the installation of new signals at three intersections and other upgrades. Alternative 1B would include all of the improvements in 1A plus new turn and through traffic lanes at New Karner and Vly roads, Vly and Career Path roads and Sand Creek Roads. The third, Alternative 2, would include roundabouts at New Karner and Vly roads and Vly and Career Path roads with the possibility of a roundabout at Sand Creek Road as well.

All three of the more extensive alternatives include a multi-use path for pedestrians and bicyclists, better lighting and upgraded or new stormwater collection and treatment. The height of the road would not change and the speed limit would remain 30 mph.

The first two would not require the county to purchase any property from existing landowners while the second two would require acquisitions, but only at the three major intersections along the route, said Lisa Ramundo, commissioner of the county Department of Public Works.

She said a final design will be chosen this summer, with another public hearing slated shortly after that. If one of the two less intrusive alternates are chosen construction will start in the spring of 2022. If one of the projects involving more extensive work is chosen, the property acquisition required will delay construction until the following spring.

Choosing between a signalized intersection with additional turn lanes or a roundabout is a dilemma. Roundabouts are more expensive to construct and would require more land to be purchased, but they do move traffic along quicker than signals.

According to an analysis presented by MJ Traffic Engineer Chad Schneider, if there was nothing done at the intersection of New Karner/Vly Road and Watervliet Shaker Road the 34.3 second delay per vehicle during peak hours would increase to 35.5 seconds per vehicle by 2033. If Alternative 1A is chosen the delay would drop to 32.1 seconds and be 33.8 second by 2033. If Alternative 1B is chosen the delay would decrease to 25.9 seconds in 2033 and if a roundabout is installed the delay would decrease to 13.9 seconds now and be 14.9 seconds in 2033. The 2033 estimates are based on projected growth and the subsequent increase in traffic.

The calculations were made more difficult due to the traffic patterns being skewed by COVID-19, he said, but historical traffic data was incorporated into the analysis. Also, he said, while traffic generated by development currently working its way through the planning process was incorporated, the firm will take a closer look based on comments.

“We are concerned about the long term growth in the area. I don’t think we will be able to come back and spend this money again so I realize we have one chance to do it right. I am personally in favor of the roundabouts because they save the most time,” said Albany County Legislator Paul Burgdorf, who represents that section of town. “I realize you are using a factor of .3 percent growth each year and I’m not sure, given the history of development in the Town of Colonie, that is adequate and especially if you are using 24 hour counts.”

An informal poll among the 72 people who attended the Zoom presentation, found a nearly even split between those who prefer roundabouts, 51 percent, to those who favor traffic signals, 49 percent. The clear majority, 67 percent, do not care about construction costs.

There was a question as to having a roundabout at New Karner and Vly Road so close to one at Vly Road and Career Path, which is only a few hundred feet away, but having a traffic circle at one and not the other would defeat the purpose. A roundabout moves traffic so much faster than a traffic signal that traffic would zip through the roundabout and inevitably back up at the signal. The Sand Creek Road intersection at the often busy entrance to Afrims Sports Park is far enough way to avoid that scenario and that is why it is not included in Alternative 2 at this time.

There was not definitive data on which idea would produce fewer accidents but Brian Cooper, the project manager for MJ engineering, said there are fewer serious accidents with roundabouts because there are less chances for direct collisions.

From 2015, there were 1.19 crashes per million vehicle miles along the corridor under consideration compared to a statewide average of 2.23 crashes. Twenty-nine percent were rear end collisions while 25 percent involved a vehicle that was turning. The majority of crashes were at the New Karner and Vly Road intersection with Watervliet Shaker Road.

A member of the Community Reformed Church, at the intersection of Sand Creek and Watervliet Shaker roads, was concerned with stormwater.

“We have water problems,” she said. “We are below the level of the road and while you are unsure of what you are doing at Sand Creek Road, I am concerned about the church and any type of run off and what is going to be done about that.”

Cooper said the stormwater situation will not get worse and could get better depending on the proposal chosen and the final design.

“The project we design will collect the majority of runoff, treat it and send it back to the environment. We would not increase the water runoff that is there today,” he said.

A handful of residents living in the development off Westchester Drive asked about that intersection. While there is work proposed including a turning lane, the amount of traffic generated does not warrant a signal at that intersection to help get onto Watervliet Shaker.

A handful of others said they would prefer the multi-use path on the south side of Watervliet Shaker Road rather than the north side so it will connect to the existing path and not force people to cross the road to continue using the path.

Ramundo said any updates will be posted to the Albany County DPW page and a final design will be chosen this summer. Residents are encouraged to email questions and comments to [email protected]. There will be a second public meeting later this year.