Village of Colonie turns 100, festivities postponed until next year 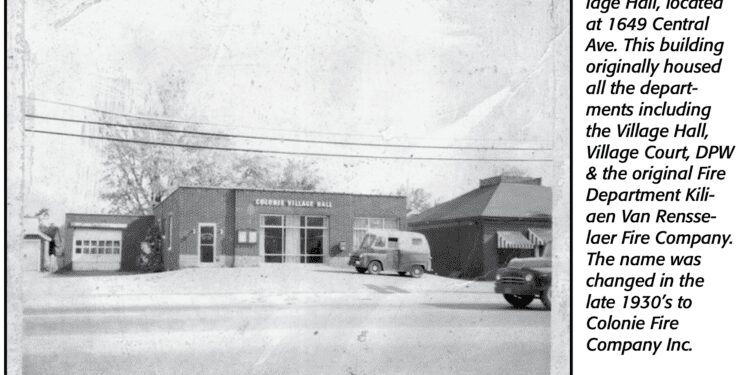 This month, the Village of Colonie is celebrating its centennial and had a whole slate of events lined up for this summer. But, like everything, COVID-19 threw a wrench into those plans so instead, next summer, the village will celebrate 100+1.

“We have been working on this for a quite a while now but because of the pandemic we were worried about people getting together and the safety of large groups and how willing people would be to get together so we decided to move it forward a year,” said Mayor Tom Tobin of a large group of volunteers and village staffers. “This has given us more time to work on things, and we are hoping it will be better than we initially thought.”

To commemorate its centennial, town officials are looking for any and all photos or stories or memories people have of the village.

“We are encouraging people to go to our website and share their stories,” Tobin said. “People are interested in our history and are surprised to learn things about the village they didn’t know before.”

“We are pushing it through Facebook and our website to see if we can come up with the photos,” Tobin said. “We do have a line on Howard Bennett. A picture given to us regarding the Fire Department. And records indicate he was a member and it seems to match up and we are trying to verify it.”

Tobin, who is interested family genealogy and who participated in shepherding much of the growth when he became a member of the Planning Board in 1998, said he is happy with but not surprised by the support of village staffer and residents.

“If you don’t look at how it was, and how it is today you can’t appreciate it,” he said. “We are just trying to give everyone today a look at what the past was and a glimpse of what could happen in the future if we continue on the same road.”

On March 2, 1921, Charles Collins borrowed $500 to defray legal costs, announced the creation of the Office of Police Justice and set a tax rate of $3 per $1,000 to support a whopping $1,285 budget. The Village of Colonie was officially and duly incorporated in the eyes of the state.

Today, the  3.3-square-mile village, located in the heart of the Capital District, has grown to more than 7,600 residents, more than 3,200 homeowners and businesses and a budget of more than $7 million.

Central Avenue bisects the village from the east side of Route 155 to the west side of Wolf Road, for better because of tax revenue generated from the car dealers and other businesses, or worse, because of the traffic. It was known as the King’s Highway until about 1799 when it became the Albany-Schenectady Turnpike.

When it became Central Avenue is not known, but it has always been a major thoroughfare and in the 1920s the village took advantage of the traffic by setting speed traps at it boundaries on either end and raised more than $20,000, according to a historical account on the village’s website.

The 1930s saw the Fire Department incorporated the village budget grew to $16,000. A decade later, the village got water — purchased for all residents from the Latham Water district — Lincoln Avenue was paved and the Zoning Commission was created to “protect the village from undesirable buildings” according to the website. By the 50s the village budget was nearly six figures.

Politics over the last few years has been relatively quiet but in 1960 there was a tie in the race for a seat on the Board of Trustees between Edward Mahoney and William Cook. Like most things in the village — yesterday and today — it was decided quickly and efficiently, in this instance by a draw of cards. Mahoney drew an eight of diamonds and Cook upped him with a jack and went on to become the village’s ninth mayor, serving from 1961 to 1971.

In the 60s and 70s, the Planning Commission was created, the land now home to one of the best open spaces in the Capital District, Cook Park, was purchased and a new Village Hall was dedicated. A ladder truck was purchased to help protect the blossoming buildings along Wolf Road and a sanitary sewer system was introduced.

Mayor Frank Leak was elected in 1995 and in his 24 years, the village expanded in every way — services were expanded for youth and seniors businesses sprouted along Central Avenue adding to the tax base.

Throughout it all, the village in the middle of the Capital District with Central Avenue and Wolf Road within its borders still feels like a village. Everyone knows everyone in one of the most active Senior Centers in the area, the Boy Scouts lay wreaths on Memorial Day and The Fire Department still loads up Santa and the Easter Bunny to visit the children.

• May: All village facilities — Village Hall, the Fire Department, the Family Recreation Center, Senior Center and the Department of Public Works — will host open houses that will include tours of the facilities and Village Hall will feature memorabilia of the past 100 years.

• July: A picnic at Cook Park similar to the annual Family Fun Day but with more food, more entertainment and more fun stuff.

• August: The Mayor’s Cup 5K and Fun Run and Walk will take place at Cook Park

• September: A parade will march down Central Avenue, down Lincoln Avenue to a finale at Cook Park

LETTER to the EDITOR: Town of Colonie’s ethics needs reforming