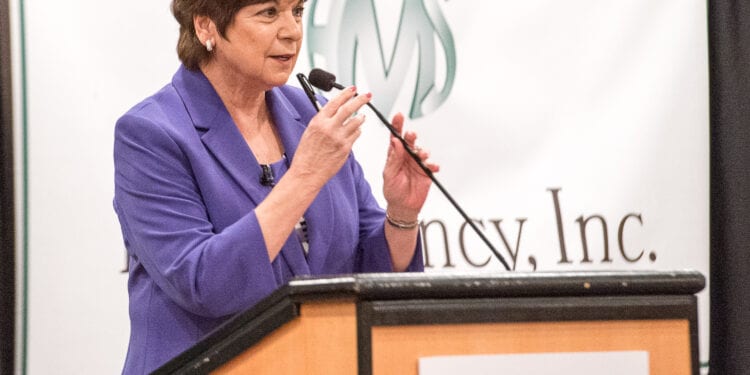 COLONIE — Supervisor Paula Mahan will not seek an eighth term and will retire at the end of the year to spend more time with her grandchildren and maybe do a bit of travelling.

“I’m in my 14th year and I look forward to finishing it and I look forward to retiring and getting back to some semblance of a normal life,” she said. “It is time. I want to spend time with my family and we want to do some travelling and my grandkids are growing so fast and I treasure time with them. My family has been very supportive of me and they have given up a lot.

Mahan’s 2007 victory over entrenched incumbent Republican Mary Brizzell set the stage for the democrats to take over one of the last bastions of Republican strength in Albany County and the GOP has fought hard over the years to get it back to no avail. Mahan, a former special education teacher in the North Colonie Central School District, beat some formable opponents over the years including Minority Leader on the Albany County Legislator Frank Mauriello, Mike Hoblock, George Scaringe, Denise Sheehan and Christine Benedict.

“The politics of the job has never been my focus. I came in with the intention of serving all the people of Colonie and I think I did that,” she said. “Politics has never been my favorite part of the job. I enjoy helping people. That’s why I went into teaching and this is shy I took this job.”

When she took the helm, she inherited a $14 million-plus deficit and was having a difficult time getting enough cash flow to meet daily operating expenses. The first years were spent getting the books back in order that included an immediate spending freeze and culminated in 2011 with privatizing the landfill — a move heavily criticized but did, and still does, generate millions for the town.

With the town finances stabilized, helped by a strong economy in general and a greatly improved bond rating, the supervisor has been able to invest in town over the past few years including ramping up the paving program, installing a splash pad at the town pool complex and making improvements to town parks. She also was able to make significant investments to the water and sewer departments, the library, the Pryun House and public safety.

“When I became Supervisor in 2008, my first goal was to create a Strategic Financial Management Plan to address the town’s fiscal crisis,” she said. “I inherited a huge deficit, the town was fiscally devastated. It took a tremendous amount of hard work and determination to stabilize the town’s finances and begin to turn the town around in a positive direction.

“I’ve accomplished everything I wanted to accomplish and I think it is in much better condition than when I got here.”

If there has been a constant criticism through her tenure it is the perception that she and her administration have allowed — and even promoted — too much development. That problem, and the tax revenue that comes with it, is an “problem” many municipalities would love to have but in Colonie there are those who think the impacts on quality of life is too great a cost.

Mahan has steadfastly maintained developers have rights too and her administration consistently acted within zoning and land use laws. During her tenure, the town spent some three years updating the 2005 Comprehensive Plan and is currently revising laws to give teeth to that broad brush vision. She also points to major projects that have re-developed existing sites like the former Latham Bowl on Route 7, the former Hoffman’s Playland and stretches of Route 9.

The town, along with the rest of the world, did have a difficult 2020 and Mahan was forced to furlough some 40 employees as different departments or services were shut down because of COVID-19. The town’s financial condition, though, is stable enough to weather the sharp decline in sales tax — another byproduct of the massive shutdown — and the 2021 budget is within the tax cap.

That was accomplished, in part, because department heads were asked last spring, as the pandemic took hold, to trim spending by 10 percent. It was a difficult year for them too, and most were asked to carry that reduction into 2021 to help balance the budget. Mahan is quick to applaud town employees, and has done so often through her tenure.

“I have had the pleasure of working with some really great people, the employees here have been my right hands over the past 13 years. We all have the same goal and that is to serve the people of the town,” she said. “That’s why we are here. We work for the people and I asked nothing more of them than I expect of myself. We accomplished a lot more than I ever thought we could when I first took office.”

And of course, she is quick to tip her hat to the residents of the town she continues to call home.

“It really is a great town. I think I got to know every inch of it and every community organization and I met a lot of really great people,” she said. “There are wonderful people here and the residents of Colonie are just the best. I loved my career teaching in Colonie and I had a really great 13 years as supervisor and I am looking forward to my last year, I’m sure it will be a busy one.”