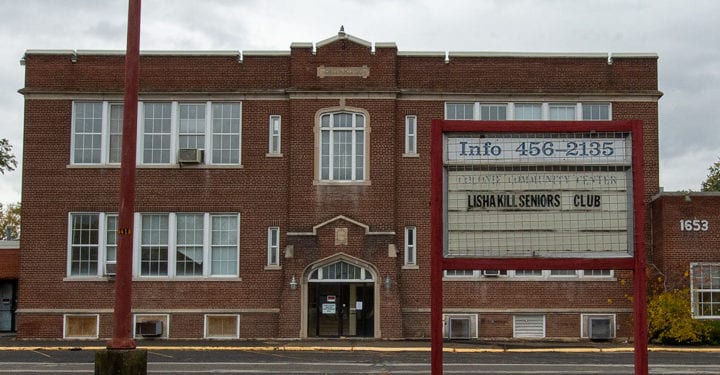 COLONIE — The vacant former community center on Central Avenue is being demolished to make way for a three-story, 107,000-square-foot, climate controlled storage facility.

The town sold the building and the five acres of land to Goldstein Realty Holding in 2016 for $1.78 million. In July, the Village of Colonie Planning Commission unanimously approved the plan to build the storage facility and earlier this month, Goldstein was issued a permit to demolish the structure built in about 1926.

The land will be subdivided with the back half being incorporated into the Goldstein Collision Center, which is attached to the Goldstein Buick GMC of Albany car dealership located along Central Avenue, three doors west of the community center. That about 2.5 acres will be used by Goldstein to park inventory. The village had previously granted the car dealership temporary permission to use the community center to store vehicles.

There was a public hearing on the subdivision in May, and three residents submitted letters with concerns about the site plan rather than the subdivision and the commission approved the request in July.

The storage facility does conform to the village’s zoning regulations for Central Avenue and the traffic generated from such a use is less than that of the community center or other acceptable use like retail.

The second site is just a parking lot with no buildings proposed.

The initial site plan was revised, shifting the building to the west and requiring more trees and a six-foot vinyl fence along the property line with the residential homes on Locust Park. The side of the building facing those neighbors was also reworked to make it more appealing, said Bill Mafrici, of the engineering firm Hershberg & Hershberg during a Planning Commission meeting.

Other concerns raised by the Planning Commission included the size of the building and emergency access. The center portion of the existing building stands 35 feet and the new building will be between 32 and 34 feet. At the request of the village Fire Department, there will be two curb cuts — one, a two-way access point on the west side of the property along Central Avenue with a right-turn only exit on the east side for emergency vehicles.

A construction worker at the site said there is interior work going on now with demolition to take place probably next week.