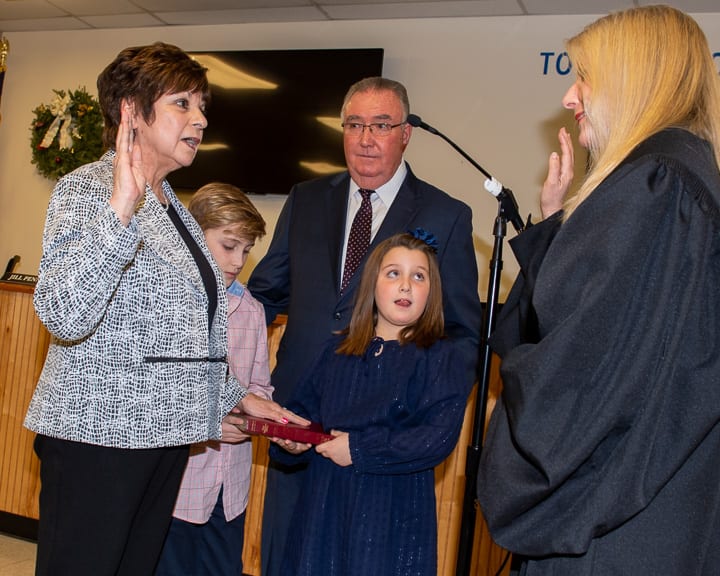 Colonie Town Supervisor Paula Mahan is administered the oath of office by state Supreme Court Judge Margaret Walsh while her grandchildren hold the Bible and her husband Joe stands by. (Jim Franco/Spotlight News)

COLONIE — Supervisor Paula Mahan and three new Town Board members were sworn in prior to the annual organizational meeting on Thursday, Jan. 2, where a host of appointments were made for the New Year.

In November, 2019, Mahan won a seventh, two-year term by narrowly defeating George Scaringe, a Republican with a long behind the scenes political history making his first run at public office.

Mahan had a 62-vote lead and after some 750 absentee ballots were counted that lead grew to an official count of 105 out of more than 20,000 votes cast.

There was one open seat on the Town Board after Republican Jennifer Whalen opted to run for the Albany County Legislature and two incumbents lost their respective bids for re-election — Republican Chris Carey and Democrat Paul Rosano.

State Supreme Court Judge Margaret Walsh administered the oath to Mahan while her two grandchildren held the Bible and her husband, Joe Mahan, stood by.

After taking the oath, Paula Mahan touted some accomplishments over the past 12 years including an improved bond rating, improving the efficiency and effectiveness of town departments and upgrades to infrastructure.

“The list of accomplishments goes on and the town is in a great place at this time,” she said to a packed house in Town Hall. “Over the years we turned many challenges into opportunities. I am fortunate to have worked with some great people and as we enter 2020 I am confident we will continue our progress and I look forward to this new term.”

During the organizational meeting, two new positions were formally filled by the Town Board. Craig Blair was appointed to the position of financial projects manager in the Comptroller’s Office for a salary of $40,000 and Thomas Breslin, a former Colonie police officer, was appointed to the position of executive assistant to the supervisor for a salary of $60,000.

The board also formalized a number of appointments and housekeeping resolutions passed to set up the town for 2020.

The following were reappointed to a one-year term:

•Peter Stuto as Planning Board chair

•Kathleen Marinelli as counsel to the Planning Board

•Michael Garry as counsel to the Zoning Board of Appeals

•Matthew Lorini as law clerk in the Justice Department

•James Campbell was re-appointed to chair the Zoning Board of Appeals for a one-year term and Kirk Huang Nicholas Viggiani were appointed to another five-year term. Tracy Swanson was appointed to fill the vacancy created with the resignation of David Vail until the end of 2020.

A number of people were appointed or re-appointed to various boards and committees. They include:

•Library Board of Trustees: Keith Volsky was appointed to a five-year term.

•Marriage officers: Rebekah Kennedy and Susan Pellegrini were appointed to four-year terms as marriage officers as per the state Domestic Relations Law.