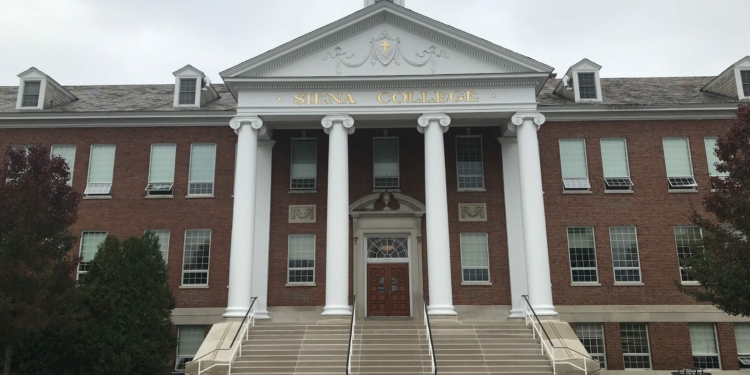 In September, the liberal arts college announced its opened the doors to 842 students, its largest freshman class in its 82-year history. That’s welcome news to learn for any college administrator, but its astounding when considering the dearth in numbers throughout the country.

The competition to enroll your kid into a school is just as fierce as any collegiate football game you’d find on Saturday. That’s because enrollment numbers across the nation are on the decline. According to the National Student Clearinghouse, total enrollment has trickled down each year since a peak of 20.6 million in 2010. It’s a relative leaky faucet as the number is closer to 19 million as of 2016. However, that leaky faucet needs to be addressed.

The common culprit behind this trickle comes down to money. ValuePenguin assessed an increase of more than 150 percent in the cost of tuition, room and board over the past 40 years. Whereas the price for one year at a public college was $8,180 when Jimmy Carter was president, that same year costs $20,770. Within the same timeline, a year in private school jumped from $17,010 to $46,950.

Where a college education was once viewed as entrance onto the fast track to professional success, it has slipped into something else. It has devolved to, at best, a meger competitive edge, and at worst, the anchor tied to personal debt. The Wall Street Journal looked into the numbers in 2017. It figured that nearly one-third of Americans have earned a bachelor’s degree. It also stated that 40 percent of college graduates experience a prolonged period of underemployment — they’ve landed a job, but they just don’t earn enough.

Today, high school students are having conversations about trade schools. Because the push to get kids into white collar jobs long

exceeded the effort to place them into blue collar vocations, there is a shortage in skilled workers. The prospect of landing a job after graduation, coupled with relative costs, appeals to more students. The College Savings Foundation said 39 percent of students in 2017 were considering alternatives to traditional four-year schools because of the difference in cost. The cost of a two-year technical education averages at $33,000 compared to $127,000 for a four-year degree.

“It’s a hostile marketplace,” said Ned Jones, vice president for enrollment management at Siena College. “This higher education is going through a period of time where the demographics are rapidly changing, and will be declining for the rest of my career and well beyond that.”

That is the competitive field upon which Siena College is playing. In retrospect, football looks easy. The Saints, however, stopped fielding a team two decades ago. So how is the school succeeding in this enrollment game? According to Jones, the school looked within.

The simulated peal of the bells chime three times from atop Siena Hall. It rings from its golden cupola and over the red and gold leaves of the steadfast hardwoods congregated within the quad. It cues the movement of undergrads. Students walk past manicured gardens of various flowers at the foundation of each building. It’s the last rush of color they will see as the calender rolls into winter. The picturesque view of college life in the Northeast hasn’t changed in generations. The curriculum, however, has.

“It really is important to work hard to be; first of all, to be as cost-aware as possible, and then to offer a product that students can clearly see the return on the investment,” Jones said.

More than a quarter of Siena College’s incoming freshmen are enrolled into the school’s newest programs — customizable business, health studies, nursing and communications. They were added to the curriculum after the school surveyed the top-trending careers. That shift also helped position the school among the best in the region.

In September, U.S. News & World Report placed Siena College 16th on a list of 170 regional universities in the northern U.S. on its Best Colleges list. The national magazine also ranked the school 14th in the category for Best Value.

“Our position among the top 10 percent of universities in the north is a credit to our retention and graduation rates, among other factors,” said Margaret E. Madden, Ph.D., interim president of Siena. “The formula of these rankings cannot account for the intangibles that put Siena into a class by itself, but it does reflect the ongoing quality of work done by our students and employees.”

Madden offered context for both the new ranking category and Siena’s placement for 2020. In the past, Siena was included among National Liberal Arts Colleges. A year ago, Siena ranked 135th nationally when measured against other mainly private liberal arts institutions. The list of National Liberal Arts Colleges is compiled of institutions that focus almost exclusively on undergraduate education.

In addition to the new programs, Siena has established relationships with several school districts within the Capital District, offering class credit towards a career path before graduating high school. These articulation agreements take a student’s high school and college credit, and map them into Siena’s curriculum, Jones said.

Are you a Saint?

Charles Seifert has a distinct perspective on Siena College’s reputation in the local business world. His professional career was in commercial lending. From the start, he recognized how the Loudonville campus had an influence upon local banks. With the propensity in which executives possessed a Siena College degree, the now-dean of Siena’s School of Business didn’t blink when someone assumed he was a Saint.

“I did not graduate from Siena College,” Seifert said, “but if you cut me, I bleed green and gold.”

Seifert has logged 23 years as a faculty member of Siena College. Five of those years have been spent as the head of the business program. In his pitch to become dean of the school of business, he compared the fates of two businesses faced with changing demands. One was the U.S. Postal Service while the other was Verbatim. When he started at the school, students used the computer lab to access electronic mail and saved term papers on floppy disks. Today, USPS continues to suffer financial woes, and Verbatim floppy disks are replaced by Verbatim flash drives. One failed to adapt while the other thrived. There was a lesson, here.

“I had the [curriculum] catalog from 2012 and the catalog from 1996,” said Seifert. He could recognize changes but, “the core of the curriculum was really the same. …The world had changed, but we necessarily hadn’t.” Drawing from his experience as a father whose child was looking at colleges, Seifert said he could see Siena College wasn’t standing out. “We started looking at all of the different areas within our majors. Our majors are accounting, economics, marketing, finance and management. Go to any school —accounting, economics, marketing, finance and management — they all offer the same classes.”

Today’s students now have a near carte blanche approach in crafting their individual business degree. Instead of forcing students into a prerequisite class that may not suit their career path, students can select two, 15-credit concentrations, allowing a student to walk away with a degree with a focus on corporate finance and accounting, or investments and analytics, or entrepreneurship and international business. In all, there are 22 concentrations that allow for 248 different combinations.

Psychologists say a student who studies within the room he’s to exam in will perform better than one who studies elsewhere. It’s an issue of being familiar with the environment in which one is expected to perform. The Market Trading Room offers the latest financial technology used every day in the world’s largest financial trading centers. Equipped with 24 student workstations, each with dual 19-inch LCD displays — 12 are running Bloomberg Professional — with access to leading financial and instructional applications, the trading room provides real-time stock market quotations, the latest news and announcements, and analysis.

Bloomberg Professional is also common to find on broadcast news. As an example of the school’s flexibility, Seifert said a student in any major can become Bloomberg Professional certified; even an English major with aspirations of writing for the Wall Street Journal. That same flexibility between programs is exhibited in a dual degree program recently announced between Siena College and Maria College.

“Siena College and Maria College both offer top-rated, college-based nursing programs, and given our proximity to each other it makes sense for us to collaborate to prepare future generations of nurses,” said Madden. “With the increasing demand for baccalaureate prepared nurses, there is a rising demand for a joint program like this, which combines the best of both worlds – a four-year liberal arts education with practical experience in clinical settings.”

Students will be able to sit for the National Council Licensure Exam to become registered nurses once they receive their associate’s degree at the end of their third year of study.

“Siena has become a close institutional friend of Maria’s, which is only natural given the alignment of the Franciscan and Mercy missions,” said Thomas J. Gamble, Ph.D., president of Maria College. “This nursing partnership will allow each of our institutions to use our strengths to give students the best possible education for a career that is in-demand in our region.”

Students will spend their freshman year on Siena’s Loudonville campus for core nursing and liberal arts courses. In their sophomore and junior years, they will attend classes at Maria’s newly-upgraded McAuley teaching and learning facility in Albany, which includes state-of-the-art nursing skills and simulation labs. They will also participate in clinical rotations at the top hospitals and health care centers throughout the Capital District. Senior year will see the students back at Siena for upper-level nursing courses and nursing outreach in the community.

“For two crucial years of their nursing education, Siena students will be fortunate to take advantage of Maria’s high-tech learning and simulation labs to receive practical experience to complement their liberal arts education,” said Lisa Lally Flack, D.N.S., director of the Baldwin Nursing Program at Siena. “The dual degree program is seamless, with only one application. Siena’s traditional courses and caring science nursing curriculum support the values and knowledge necessary to build a compassionate career based on service and leadership.”

Siena has a similar agreement with the Belanger School of Nursing at Ellis Hospital in Schenectady that was established in 2017.

Both colleges also offer B.S. completion programs for existing registered nurses looking to follow the nationwide trend for nurses to be educated at a minimum of the baccalaureate level.

Siena College is a private, co-educational liberal arts college in the Franciscan and Catholic tradition. Founded in 1937, Siena offers nearly 40 majors, 80-plus minors and certificates, and prestigious joint-degree programs in liberal arts, science and business. A wide range of student activities join with immersive service learning, research opportunities, extensive study abroad options and an NCAA Division I athletic program in providing more than 3,000 students the opportunity to prepare for a lifetime of making a difference.

Based against Value Penguin’s “Average Cost of College in America: 2019 Report,” a Siena College education costs more than the national average ($46,950) for private schools. Classes, room and board cost approximately $54,000 a year. Contrary to the price tag, Jones said nearly half of Siena College students come from the Capital District, and those families average an annual household income of $115,000. The school, however, offers a $52,000 Scholarship Guarantee over a student’s four-year stay. Extrapolate the aid over four years, that knocks Siena’s cost below the national average.

“Our big drive is, how do we keep this as affordable as possible,” Jones said, “without sacrificing the incredible quality? … We guarantee they are going to have an academic experience that’s going to lead to them graduating on time. [And] the $52,000 is an important statement to the families. We’re saying, ‘We stand by you.’”

Glenmont roundabout is on its way (w/photo gallery)