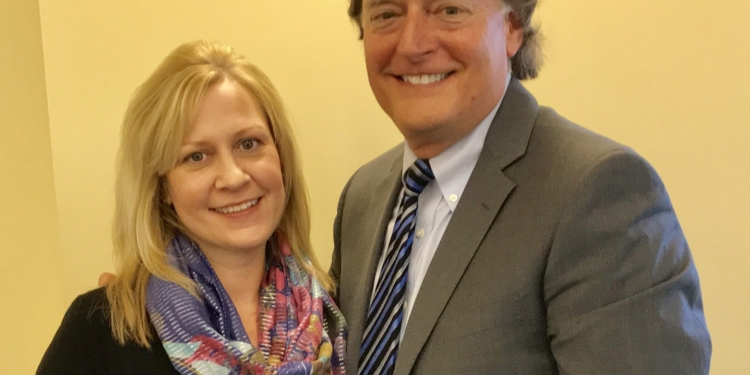 COLONIE — Ask any judge or lawyer about who really runs the court system in any municipality it’s almost a guarantee they will say the same thing – “the clerk.”

Earlier this year, the Town Board confirmed Mary Falace-Mayr as the new clerk of the court to replace Julie Gansle, who was sworn in as town clerk at the beginning of the year.

“I have some experience, I have been here since 2005 and I started at the bottom of the chain as a typist and worked my way up the ranks,” she said. “I spent the last two years as deputy so I’ve had a nice introduction to the position though I still have a lot to learn.”

The Shaker grad was nominated by the town’s three justices – Peter Crummey, Andrew Summers and Norman Massry – and was unanimously confirmed by the Town Board to the $80,833 position.

“Clerks,” according to Crummey, the senior town justice, “are the ones who make it happen.”

Since there’s no election, there’s no set term and serving time is based largely on performance and the will of the position holder.

“I am absolutely honored and privileged to be able to serve in this capacity,” Falace-Mayr said.

Each day is different, she said of the some 25,000 cases a year that come through one of the busiest courts in the state.

Each day she’s responsible for managing cases and paperwork, making sure records are in order, assembling cases and even running police records. Generally, the a typical day starts out with the some 125 daily traffic tickets and then any arrests that took place the night before.

She’s also responsible for all of the money that flows into the court, be it from fines or small claim cases. Last year the court took in $2.8 million, all of which was completely managed by the clerk of court.

“In 19 years, I’ve never touched a dollar bill. They’ve managed all the money,” Crummey said. “This court wouldn’t run without Mary Falace-Mayr. It’s her capacity to be cool under fire.”

While she may have some plans to make the 22nd busiest court in the state run more smoothly, she said she is still learning the ropes of being the top dog so there is nothing on the front burner.

“It’s still a work in progress,” she said. “I’ve been here a while but I’m still kind of new to this position so I have not seen enough to make that kind of determination yet.

“It is very interesting work and there is never a dull moment. We rarely see the same thing twice and I look forward to many years of service.”