Smaller bond proposals on the table in North Colonie 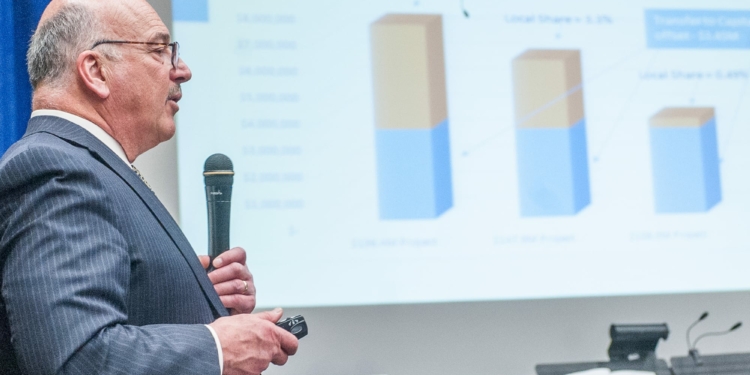 COLONIE – The North Colonie School District Board of Education will consider two different, scaled down bonding options in the coming weeks and present one to the voters on May 16.

One proposal, Option A, would spend $147.9 million and pay for improvements at the high school, junior high schools and elementary schools. The other, Option B, would spend $106.3 million and, said Superintendent Joseph Corr, focus mainly on the district’s most pressing needs.

Some 150 residents came to Shaker Junior High School on Monday, March 20 to hear a presentation by Corr, and then break off into smaller groups to discuss the options.

The Board of Education will meet on March 27 to discuss the meeting and the options and then formally vote to put one of them to a referendum at a meeting on March 30. The proposal would then go to voters, along with the district’s budget, on May 16.

In December, 2016, residents voted down a $196.4 million plan, 54 to 46 percent. Corr said if the plan is again defeated, regardless of which one is presented to voters, the district cannot bring any bond issue back to a referendum until December, which would too late to get the enhanced state aid.

To get the aid made available when the district merged with the Maplewood School District, construction contracts have to be signed by June, 2018. If the voters shoot down the project in May, the district will not have everything in place in time and will lose the aid but still have the same issues.

“I’m extremely concerned and it’s not a threat it’s a statement,” Coor said, “if we don’t pass it this time we won’t realize the enhanced aid.”

Option A, the more expensive, would increase security at all eight district buildings, make $18 million worth of renovations at the elementary schools, convert the junior high school to a grade six to eight middle school, make middle school renovations, and renovate the highs school.

More specifically, Option A would include:

-Expand library and media centers at all elementary buildings

-Renovate and expand the high school career and technology spaces

-Renovate and expand science and art labs at the high school

Option B would spend some $45.1 million less on the high school.

Eliminated from Option A are the renovation and expansion of the high school career and technology spaces, the renovation of the science labs, the new 1,200 seat auditorium and the physical education studio and weight room addition.

It would add two additional classrooms at the back of the high school building to address increased enrollment and program needs and expand the study area and cafeteria.

Corr said he would prefer the board bring Option A to the voters, but would be happy with Option B and address the high school at a later time.

“In the very least we would like to see B pass. It does address our immediate needs and gives us more time to have a conversation with our community about what we need for our high school and go out and do out high school right,” he said.

“I like Option A because it has a lot of things we need. It has some extra things too, but if we do Option B we won’t have science labs or art rooms of new career and technology spaces which we really need at the high school and junior high school,” said eighth grader Fox Rifenberg-Stempel. “At the high school, the technology rooms are really outdated. They still look like 1960s classrooms and they are rusting away and falling apart a little bit.

“If they don’t do anything, there won’t be any room in the schools and I don’t know what the district will do then.”

The district is projecting a nearly 10 percent enrollment increase over the next decade and is, according to Corr, in desperate need of more space.

The majority of those in attendance seemed to favor making improvements, with some voicing concerns about it being shot down again.

“I thought it was very informative and it’s important as a community member to come out and understand what is going on, said Marcy DeBiccari, who voted yes in December. “I would like to see Option A, but I’m concerned it won’t pass, so I’m in favor of whatever will pass and whatever the district can do.”

Rich Gervais, though, voted against the plan in December. He said he would vote for one of the options currently on the table if “there was a clear explanation on the needs.”

“For instance, how accurate, how reliable, are the enrollment projections that say we will have all these additional students,” he said, adding he is unclear if the cost of the latest and greatest in education would yield an equitable benefit. “People are trying to make life work on a fixed income that has not increase significantly over the last 20 years and are very concerned about what their tax dollars are going to be doing.”

In the end, he said, he would be willing to vote for something, and feels Option B has a better chance of getting passed.

“I think Option A could get passed, but if they are thinking about throwing A at the residents of the North Colonie School District without giving them understandable reporting of the facts and needs then A would be a struggle,” he said. “If you build a house, and put a big beautiful stove in the house knowing nobody will ever use the stove, what’s the sense of putting it in the house.”

He was as adamant while saying the district needs the upgrades to not only accommodate the increase in students, but to continue providing a solid education.

“The decision made in May will have a long lasting impact on the community,” Corr said. “Schools are a community asset. A well educated populace is essential to a well-functioning democracy and essential to our economic well being. When all are educated, and educated well, we as a society benefit.”