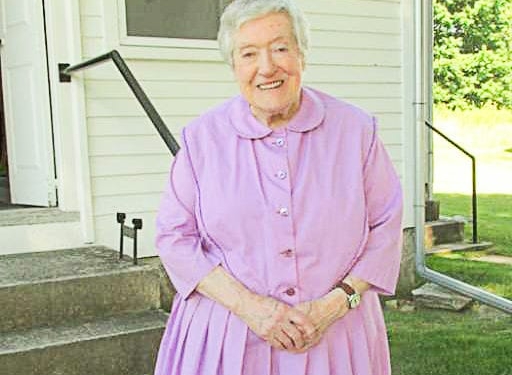 According to a statement found on the Sabbathday Lake Shakers Village website, Carr died at the age of 89 in Maine on Monday, Jan. 2, after a short battle with cancer.

“It is our sad duty to relate that our dear Sister Frances passed away at 1:35 p.m. today after a brief battle with cancer,” the statement read. “The end came swiftly and with dignity surrounded by the community and her nieces. We ask your prayers for her soul.”

“I have never met another human being who exuded so much love and warmth. Sr. Frances was remarkable for her strong but quiet leadership. This is a tremendous loss,” Starlyn D’Angelo, executive director of the Shaker Heritage Society (SHS) said. She added that many people revere Carr as the last true Shaker.

Carr was the last orphan who was taken in by the Shakers, according to D’Angelo. Carr was born in Lewiston, Maine, in 1927, and was placed with the Shakers following the death of her father. Carr excelled in the kitchen, according to Sabbathday Lake Shaker Village, eventually becoming a head cook and remaining in that position for over five decades.

The Shakers, a separatist religious group that practices celibacy, were once headquartered in the town of Colonie after arriving in America in 1774. By the middle of the 19th century, the group had between 4,000 and 5,000 members. The last Shaker community is located in New Gloucester, Maine. Carr’s death has received extensive media attention internationally, as well as in New York and Maine.

While the historical Shaker areas in Colonie are protected, they face increasing threats from economic development and lack of funding to care for the facilities. At this point, SHS is hoping to secure a 50 year lease with Albany County which would allow it to make repairs to its buildings that urgently need rehabilitation.

The 50-year lease would allow SHS to apply for grants which would fund the repairs, ultimately saving the county money because it would not need to provide the manpower necessary to complete the work on the buildings. While SHS originally asked for a 40-year lease back in 2005, it could not be approved because the county could not legally approve a lease for that duration at that time.

D’Angelo has said that SHS serves as an introduction into the Shakers, a group of pacifists and healers, and their culture.

Visiting hours and funeral services for Carr were held last Friday and Saturday.

In lieu of flowers, donations may be made in her memory to Androscoggin Home Care and Hospice in Lewiston, Maine.