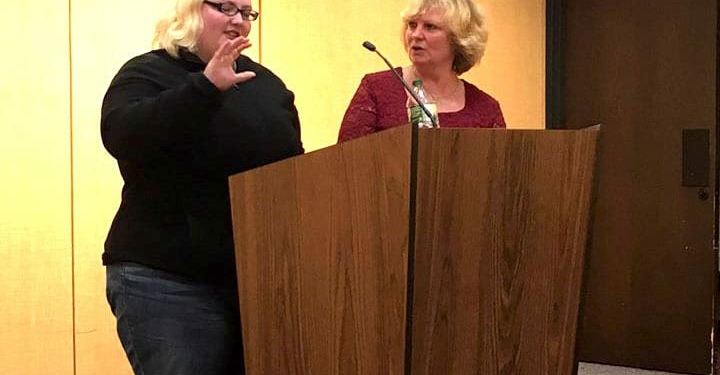 Brittany Frey and her mother, Laurie, talk about going through life with autism. (Photo by Kassie Parisi/SpotlightNews)

Frey, a nurse of 36 years, spoke to an audience on Wednesday, Nov. 30, at the William K. Sanford Library about her journey with Brittany. Frey’s book, titled, “My Puzzled Angel,” details her life with Brittany and delves into the complicated and inexact science of both diagnosing Autism in children, and raising an autistic child.

“I wanted to share my story to help others get through the difficult times of the autism,” Frey said at the presentation.

Brittany was Frey’s second daughter, born 18 months after her first child, Jessica, Frey explained. Jessica, she said, exhibited no problems in her early age. When Brittany was born, she didn’t exhibit problems either, according to Frey; Brittany played with her sister and communicated with her.

But, after about six months, obvious issues began to manifest in Brittany’s behavior. Frey described what happened to Brittany as a regression of sorts…Brittany wasn’t talking, she hid when guests visited the house, and would frequently cover her ears. For a long time, Laurie thought that Brittany was deaf, that she was allergic to breast milk, or that something she was being given was causing the problems. Frey was not sure whether the standard shots Brittany was given as a child had something to do with the autism, but she finally put her foot down when Brittany was eight months old and decided to seek help.

Frey described Brittany’s first signs of autism as a “switch flipping” in her. When Brittany played with cars, Frey said, she stacked them vertically, instead of horizontally on the floor. Brittany was not able to communicate with Frey, which lead to volatile tantrums. Doctors told Frey that Brittany was not deaf, and they bounced around to different pediatricians who could not seem to be able to put their finger on what was wrong with Brittany. Frey described her frustration over the fact that no one was able to give her an answer.

“Nobody was hearing us,” Frey said. In the meantime, Brittany had developed a dangerous practice that is linked to autism known as pica, in which the affected person might attempt to eat many things that are not food. Brittany was eating foam from couch cushions.

Eventually, Frey saw a pediatrician who picked up right away on the fact the Brittany was autistic. They were able to get access to caretakers who specialize in raising autistic children.

Nailing down the issue, however, was only part one of the problem. Frey struggled to find babysitters who were adequately trained to care for her daughter. She figured out that Brittany enjoyed dancing and watching videos, but had difficulty pulling her away from those things to focus on other things, such as schoolwork. At the insistence of a special education teacher early in Brittany’s childhood, Frey had to learn sign language in order to communicate with Brittany, a task she was not initially thrilled with.

“I don’t want Brittany to sign. I want to talk to Brittany,” Frey said. However, Brittany’s teacher emphasized how important it was to have an underlying communicative structure that Brittany would be able to build on, so Frey learned how to sign.

Brittany’s tantrums continued at home, in the car, and in public places—including the mall. Her daughter was bullied in school, said Frey, and she was repeatedly forced to march into school to confront the parents of the children who were picking on her daughter. At one point in Brittany’s youth, Frey attended a talk given by a mother with an 18-year-old son, and she said that presentation sent her into a slump of despair. She cried for days.

“What’s wrong?” Frey said she would think. “Why can’t my kid be like somebody else’s? What’s going on here? We struggled, a lot. I sat there and cried and said, ‘there’s something wrong, and nobody’s figuring it out for me, so I’ve got to do it.” After she was finished crying, Frey said, she launched herself into a nonstop whirlwind of activity to figure out what the next step was that would allow her to help Brittany. Frey went through a lot of hits and misses, but slowly and surely began to understand her daughter, noting that when Brittany poured cereal all over the floor and covered it with milk, she knew her daughter was grasping at the very least the concept of how cereal is supposed to work.

“It was a daily excursion,” Frey said. “Everyday she taught me something new and different. I see other families having five or six kids and I’m like, why can’t we just be that way? Well it wasn’t. It wasn’t, and it was always a struggle.”

Now, at 25 years old, Brittany now balances her time between working and hobbies, which include cosplaying and fandubbing. She has been cosplaying, which is a combination of costume wearing and roleplaying, often of popular fictional characters, almost eight years, and doing voice work for nine.

“It’s a really great stress reliever, so that’s why I do it,” Brittany said. While Brittany wasn’t able to pick a favorite character to represent, she said that she’s looking forward to cosplaying as Sapphire, a character from the popular cartoon “Steven Universe,” in a few months. Frey interjected that, sometimes, she has to bring Brittany back on track and remind her that work is important too. But she’s proud of her daughter, who is, at this point, active in running panels about anime, and even travels with friends to places such as New York City and Connecticut. Despite all the monumental barriers she had to tackle while being Brittany’s advocate, Frey only wants to see her daughter get through her days, have good friends, and be happy.

“It can happen. We’re very blessed. She’s come a long way and I’m proud of her,” Frey said.

NIGHT and DAY: Yo-Yo Ma and Max & Ruby in The Nutcracker Suite