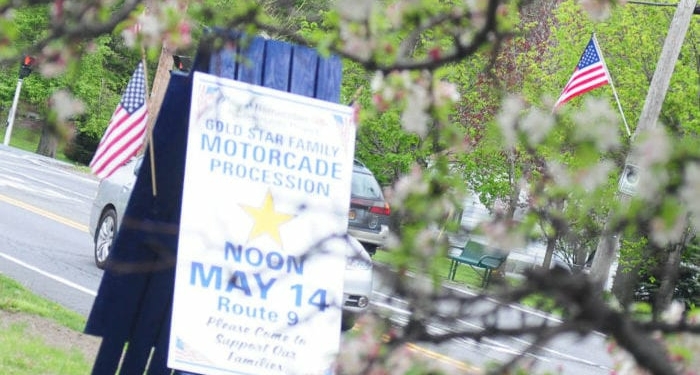 COLONIE — Every flag stands for approximately ten service men and women from the Capital District who have been killed in the line of service since World War II.

Each of the 121 flags that can be seen hanging from telephone poles on Route 9 in the Town of Colonie are dedicated to the memory of local heroes who have lost their lives in service to their country—1,238 men and women that Gene Loparco and Tom Regan have been able to identify thus far.

“We’re running out of poles,” said Regan, founder of Operation: Please Remember Me, an community project that he began organizing four years ago in an effort to memorialize friends he lost during the Vietnam War. Each year, they hang the flags along Route 9 and organize a processional motorcade that travels the route through Colonie in honor of those who have died. At the time of the first motorcade in 2013, he and Loparco had identified only 560 local war casualties since WWII—but the number continues to grow. “We’re also going to go back to earlier wars,” added Regan. “We just wanted to make sure we weren’t missing anyone.”

“I lost four of my good friends right out of high school,” he said. “They were great friends of mine, young men who volunteered to go to war in Vietnam. Three of them graduated from Albany High School with me, and another, who I grew up with, was killed in the Tet Offensive.” Regan said that he got the idea to organize the memorial four years ago after a conversation he had with his son, who was planning to attend a high school reunion.  “I got really quiet,” said Regan, “and he asked me what was wrong. I told him I would like to be able to have a reunion with my high schools friends, but that so many had been killed in action.” Regan’s son suggested that his dad could instead do something to honor those fallen friends.

A lineman with Niagara-Mohawk and then with National Grid, Regan said “The only thing I ever knew in my whole life was poles and wire and so I started thinking that maybe I could hang a flag on Route 9 to honor these men and women.”

Regan proposed the idea on September 11, 2012, at the Zaloga American Legion Post meeting, where he met Gene Loparco. Loparco approached Regan after the meeting and offered to purchase a flag and donate his time; since that day, the men have worked closely together and become good friends. Regan recently nominated Loparco for Albany County’s May Citizen of the Month for his work on behalf of local veterans, and introduced his friend when he accepted the honor on the morning of Friday, May 6.

Initially focused just on Albany County, the Please Remember Me initiative grew to include the entire Capital District as mothers of fallen veterans in surrounding counties began to contact Regan and Loparco, asking to purchase flags to commemorate their own children. “The Capital Region doesn’t really realize how many men and women they’ve lost,” said Regan. “I want people to realize that these flags stand for something. They stand for a tremendous amount of sacrifice.”

Over the last four years, Loparco has dedicated a remarkable amount of time and energy to identifying all of those who have been killed in the line of duty since WWII. “We started with 296 names,” said Loparco. Those first names, he recalled, came from a May 1936 Times-Union article about Albany natives who died during the second world war. Widening the scope to include the entire Capital District, Loparco said he realized how much research it would require to find all the names of those who have died in the line of duty since WWII. But that didn’t stop him.

“He’s done all the research that there is on the men and women who were killed,” said Regan. “He really deserves a lot of credit. He knows where every single veteran was killed, and those who died at home from injuries sustained. It’s really quite remarkable.”

Since becoming involved with Regan and Please Remember Me, Loparco has also become actively involved with more than 20 other veteran’s organizations and activities, most often utilizing his talent for photography to document and publicize things like events and fundraisers. “Educating the public is so important,” said Loparco as he accepted his award on Friday in front of friends and local officials. “Especially the youth of America.” That is why, he said, he spends between eight and ten hours a day on his computer writing press releases, editing photos and doing all manner of public relations work for the multitude of organizations to which he donates his time.

“Our senior veterans are leaving us too fast,” he said. “We must acknowledge their stories and teach our children that freedom is not free.”

“That’s really what we’re trying to say,” said Regan. “That there is a price for freedom.”

Commending the community for their enthusiasm and support, Regan said that he owes special thanks to Town Supervisor Paula Mahan, Robert McCormick of TrustCo Bank and the Tri-County Council of Vietnam-Era Veterans, as well as to his friends and colleagues at National Grid. “The linemen and the Local 97 and the employees at National Grid have been tremendous, we could never have done this without them volunteering their time.

“Believe it or not,” he added, “every one of those flags was raised by our community. Sometimes it was little kids who took up collections. And there are now over $2,300 of brand new flags right now on that street.”

The memorial motorcade is scheduled to begin at Comedy Works near Memorial Hospital at noon on Saturday, May 14 and will proceed down Route 9, past Siena College, before taking a left on 155 and continuing on to the highway and, ultimately, to the Zaloga American Legion Post at 4 Everett Road in Albany, where refreshments will be served. “Everyone is invited,” said Loparco.

The procession will be led by Mahan, Albany Mayor Kathy Sheehan and Albany County Executive Dan McCoy, as well as two brothers of fallen decorated soldiers: former state Congressman Michael McNulty and Michael Guenette, the brother of Peter Guenette, a serviceman who received the Congressional Medal of Honor after leaping onto a grenade in Vietnam to save the lives of his platoon. Loparco and his wife will also be riding at the head of the motorcade, followed by the families of fallen vets and representatives from various military and veterans organizations around the Capital District. Every block, said Loparco, will be lined with representatives from local law enforcement paying respect to those being remembered.

“We wanted to keep it a solemn procession,” said Regan. “But people are encouraged to bring signs or a flag or to wave as they go by. It only takes a few minutes but I think that we’re a better town because of it, and a better community.”

Gene Loparco concluded his acceptance speech on Friday morning with a quote from Congressman McNulty, who was on hand for the award presentation. “There are two things I do every day,” he said. “I thank God for my life and I thank the veteran for my way of life!”

Library budget, trustees seats on the ballot this month