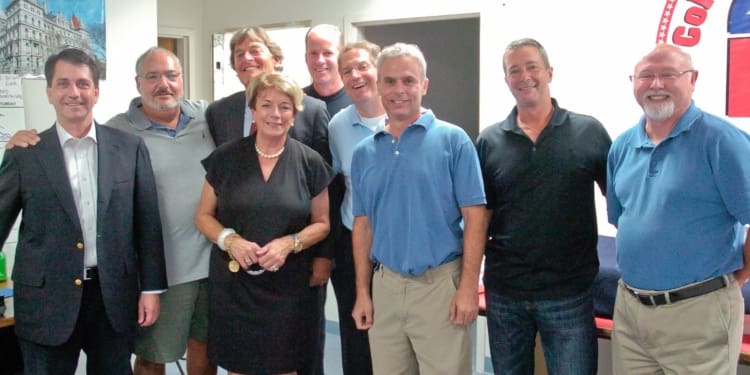 Four candidates are newcomers to the board election, with two incumbents from Mahan’s administration.

The town’s Republican Party is backing Christopher Carey, a retired Colonie police officer, Brian Manion, CDPHP director of facilities, and business owner-lawyer Jennifer Whalen, all of whom are lifelong residents of the town.

The Democratic candidates include incumbents William Carl, a former Albany County employee and eight-year Town Board member, and Paul Rosano, operations manager at Staples and board member since 2012. Board member Brian Haak decided not to seek reelection, choosing to concentrate on his work both professionally and volunteer.

“Primarily, I’m running as a result that Brian Haak made a decision recently not to run,” said Lane. “I had expressed recently an interest to Rich Jacobson,” the town’s Democratic Committee head, “but I didn’t expect to so soon.”

Lane said he had expected to possibly run in 2018. However, he said he was confident in his experience, having served on the Village of Menands board for 12 years, Colonie’s Planning Board since 2008 and on the Citizen Advisory Board since 2002.

“To be honest, it doesn’t nearly match the experience Brian Haak has. Those are big shoes to follow, but I’m looking to bring the experience that I do have,” Lane said.

The Independence Party has endorsed Lane, Rosano and Whalen.

The Republican candidates said their decisions to run for the Town Board lie with a desire to be more deeply involved in the community.

“I’ve thought that I just always viewed things as bigger than myself,” Manion said. He said he wants to “protect and provide a future for our kids and future residents to the town.”

Having served as president for the police union in Colonie and a decade on the board, Carey said he felt his background made him a good asset to the town.

Manion and Carey are both pulling from their community service work in their campaign. They said the public safety department, like the police department and fire departments, are understaffed with employees and volunteers.

Carey, currently doing civilian communications for the police department, said with the amount of retirements in the past year and promotions, positions have not been replaced.

“About 15 or 20 years ago, we had more police officers,” said Carey. The increasing developments in the town call for an increase in public safety, he said.

As an attorney, Whalen said she felt the need to help the town get back on track. She specifically mentioned reports came out stating the town’s Industrial Development Agency failed to report money going in and out of the agency, and ensure the correct number of jobs were being filled by projects.

Such discrepancies, according to Whalen, will cause “a ripple effect that will be detrimental to the taxpayers in the Town of Colonie.”

The candidates agreed development was a large area of concern for the town this year. With a large retailer proposed off of Albany Shaker Road and national businesses like Sonic moving to the area, they said more needs to be done to protect residential neighborhoods.

According to Carey and Whalen, door-to-door campaigning resulted in many residents concerned about traffic in town, specifically near Maxwell and Osborne roads.

“Will our infrastructure be able to support the difference cars coming in? I’m not against development, but I think we have to listen to the residents and realize what their concerns are and try to do a balancing act,” said Carey.

However, Lane said the town is careful to look at development in the area. “We are cognizant of these kinds of issues,” he said of the zoning process.

When development is proposed, he said the town looks at the character of the surrounding neighborhood to ensure projects are suitable for the area, which is why the zoning process was revised under Mahan to make it more appropriate and simpler to understand.

Studying development in Colonie is one of the projects Carl said he would like to see through. Come November’s election, he said there are many long-range projects the current Democratic administration had begun that are currently in process.

The most recent project includes a large traffic study of the Albany Shaker Road corridor. An ad hoc committee of state, county and town officials was put together to look at the developments and impact on traffic in the area.

“Whether it be commercial or residential, we look for projects that sit” well within the proposed section of town, said Lane. “Will it be something that is suitable for the neighborhood that it is in?”

The current town board also put forth plans to work on the town’s infrastructure, including eight-to-10-year plans for paving, redoing roadways and looking at sewer policies, said Carl.

“We’re just about in the middle, and we’d kind of like to see them through. I know I have young adult kids… If we do anything, we’ve got to leave Colonie in good hands for them,” Carl said.

In terms of town finances, both Carl and Lane said the town is moving in a positive direction. About 10 years ago, Colonie faced a nearly $20 million deficit, which has since been closed.

As well, the town has been staying within the state mandated tax cap since it was first established, allowing residents to qualify for refunds. According to Carl, the town is not “floating in money,” but doing well since Mahan and the current town board took office.

“I’ve been on the town board for eight years now. We first ran in 2007, then I ran again in 2012. It was a point where the town was not going in the direction that we thought it should be going, given the situation that we were in with the debt. We figured that maybe we could do a better job,” said Carl.

As a resident, Manion, however, questioned the current office’s transparency. He said the town government is not as transparent as it once was, making residents feel as if there is “no need to complain because nothing will change.”

Whalen said she wants to ensure no discrepancies in town agencies fall back onto residents, affecting quality of life in terms of taxes and town services. The Republican candidates said they would like to be able to work with other town agencies to ensure the town runs smoothly.

Lane said he also wanted to familiarize himself with other town departments.

“I would like to see how we’re fairing as far as how we’re doing, what we’re taking in. Are we basically meeting our finances as far as revenue versus expenditures, and how are we doing it?” said Lane.

Carl said the budget process has become more transparent for the public with a line-item budget, put into place when Mahan was elected. With budget meetings open to the public, comments taken at the beginning of each Town Board meeting and public agenda sessions, he said the transparency is there, and the board would like to hear from residents.

“Colonie is heading in the right direction,” said Carl. “We try to keep our taxes low and affordable, and we still try to give the services every resident in the Town of Colonie not only expects, but deserves.”