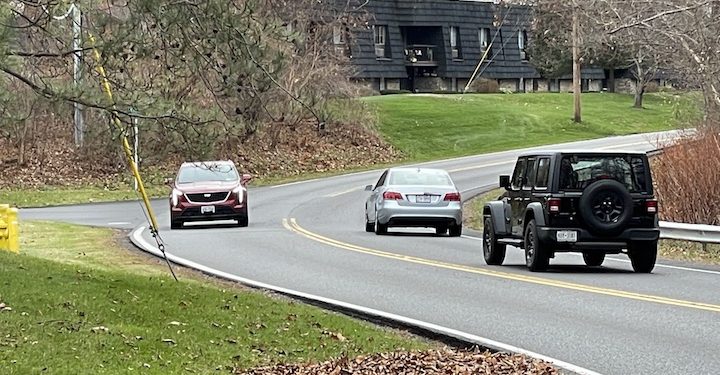 NORTH BETHLEHEM — The Bethlehem Town Board voted to take initial steps that could lead to a sidewalk for Blessing Road on Wednesday, Nov. 9.

Several residents from the Blessing Road corridor spoke in favor of the measure in the public comment section just prior to the board’s vote. Resident Vince Perry was just one of many who described the disconcerting scene of traffic as it rushes down the road.

“I see my neighbor’s children get on their school bus and watch it almost get rear-ended,” he said, before Bethlehem Town Board members. “I watch my neighbors walk on the street or bike on the street and take their lives in their own hands.”

Residents described the meandering two-lane road as a “connector” road as it runs between Route 85A and Krumkill Road. It has long been a means for motorists traveling to and from Guilderland and Crossgates Mall. Traffic has increased, too, with additional development. Since the mall opened in 1984, several developments have been built along the Krumkill and Blessing road corridors. According to town records, travel along it each day. The mandated speed limit on Blessing Road is 30, but resident Leslie Hartman said that doesn’t prevent motorists from speeding.

Hartman said she was driving along Blessing Road when she was passed by another motorist. The road is marked with double yellow lines throughout its length, indicating passing is not allowed. “They had to be going 50,” she said. “I mean they went flying. They could’ve killed somebody. You know something really has to be done.”

Board members have repeatedly addressed the topic of speed limits within the town. They changed the permitted speed on Slingerlands’ Cherry Avenue Extension three years ago. It was a popular speaking point during the Delaware Avenue Complete Streets and Road Diet last year. And in January, Town Board members discussed the possibility of reducing the townwide speed limit from 30 to 25 mph.

Robert Leslie, town director of planning, requested that the Town purchase service agreements totaling $46,200 with MJ Engineering and Land Surveying, P.C. for surveys that should lead to sidewalks and multi-use paths for Blessing Road.

MJ Engineering is to prepare right-of-way and topographic surveys of Blessing Road from Route 85 to Krumkill Road ($34,100). This will inform what Town-owned land is available for improvements and what level of construction would be needed based on topography, trees, utility poles, wires and more.

The Saratoga County-based firm is to also develop conceptual designs, cost estimates, and feasibility study for pedestrian and bicycle improvements ($12,100). This will also include a public meeting to gather feedback on draft conceptual design options from the Blessing Road neighborhoods.

Resident Martha DeGrazia said you’d welcome the added safety. The avid runner who has competed in the Boston Marathon several times, said she knows, “every stone and every crack in Blessing Road.” She nonetheless sees another opportunity for the connector road.

“I just want to bring up another thing that strikes me when I run is that’s a lot of people’s initial entry into Bethlehem, Voorhessville, Delmar, and what are they looking at?” she asked, rhetorically. “They’re looking at what looks like an unkept connector road, which is a shame. … I mean with a little improvement that could look like a really good representation of what we are as a community.”

Survey work is anticipated to begin in the next few weeks. Conceptual designs and feasibility studies will follow next January.