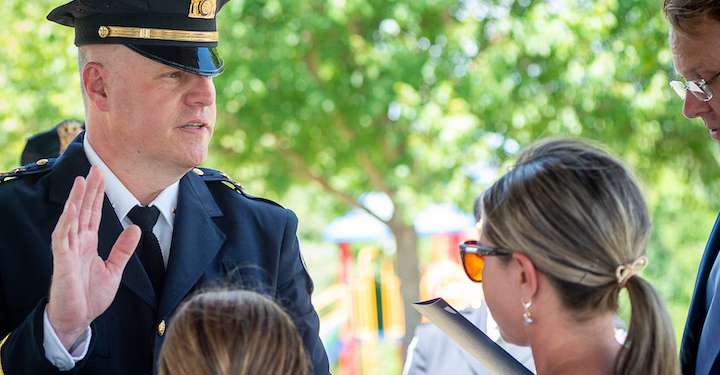 Bethlehem swears in James Rexford as its new Deputy Police Chief on July 19.

DELMAR — James Rexford was sworn in as Deputy Police Chief for the Bethlehem Police Department on July 19 after the town board approved the move on July 12 acting on a request from Police Chief Gina Cocchiara.

Rexford served as a commander of the department since 2020, a Sergeant from 2007-2020 and a patrol officer from 1998-2007.  He started his career in law enforcement at the Town of Coeymans Police Department.

“It is my experience and institutional knowledge that will assist me with the new position,” Rexford said.  “I have 25 years of experience with the department, starting as an officer in 1998, and have steadily risen through the ranks over the years. This progression has allowed me to develop a broad understanding of how the department operates, which will be invaluable in my new role.”

Cocchiara was looking for specific attributes in a deputy chief as well as qualifications.

The move solidifies the command structure at the 55-person department, which has had many changes in the last three years due to retirements of its upper management and new members in its lower ranks.  Rexford was one of three finalists for the department’s top job in 2020 along with now-retired Commander Adam Hornick and Cocchiara, when longtime Police Chief Louis Corsi retired in 2020.

“It is the standard practice to promote a DC from within the department. You will see this fairly consistent within area Police Departments. There are civil service requirements that can come into play as well,” Cocchiara said. “I now have some very talented professionals in my Command staff, and therefore would not consider looking outside and believe the morale would have been negatively affected by doing so.”

Rexford earned a Master’s Degree in public administration from Marist College, a bachelor’s degree from the State University at Albany and an associates degree from Hudson Valley Community College.

Rexford will add additional duties to his current role.

“Now I will play a more active role in making recommendations to the Chief regarding staffing, budgets, and policy, work alongside the Chief to make modifications to current procedures and assist in creating and implementing new ones which affect the operational needs of the

Department,” He said.  “I am looking forward to the challenges of the new position, and I will continue to work hard to be successful in this role.”

Colonie to fine those with ‘nuisance alarms’