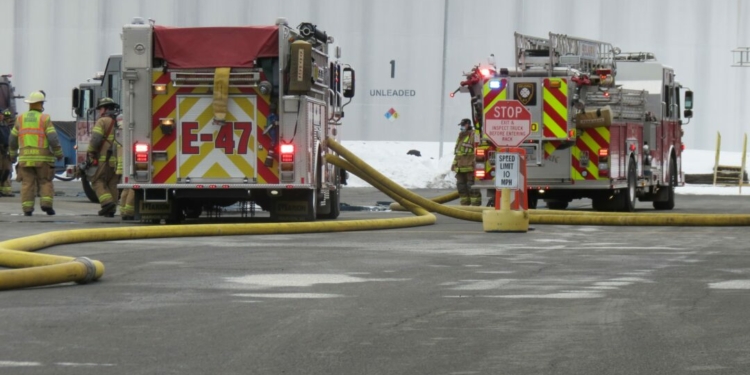 GLENMONT – A mechanical failure on a storage tank leaked 500 gallons of gasoline prompting a response from local fire companies and State Department of Environmental Conservation on Tuesday, Jan 25.

At 4 p.m. Selkirk, Elsmere, Delmar, Slingerlands and Coeymans Fire Departments responded to 495 River Road for a leak at a storage tank at the facility. According to DEC, the petroleum released from a swale and asphalt containment area when vapor recovery system malfunctioned.

According to Bethlehem Police, pressure within a main tank containing gasoline built up which caused an actuation of a valve to allow product to move to a reserve tank.  Once the product entered the reserve tank, a weld on that tank failed which caused the leak.

Mac-Son & Clean Harbors provided spill mitigation services with vacuum trucks and other equipment.All spilled product was contained within pre-existing containment ponds and no injuries were reported. Additionally, all impacted snow and gravel will be removed from the site. No trucks were involved in the system malfunction.

A spokesperson for the agency said DEC will continue to oversee the cleanup and monitor the area for any threats to public health and the environment. No impacts to water or other sensitive receptors were noted at this time.

To view the photos click on one below and swipe through the rest. If using a news App, click here to view the gallery.

This story was updated at 10:50 to add more details on the cause.